In the heavily forested Ida Mountains of northwestern Turkey, a bus carrying protesters snakes along the winding roads to its next stop in the fight against the planned construction of a gold mine by a Canadian company.

They were among some 5,000 people protesting earlier this month against Alamos Gold’s nearby mining site and now, a couple of days later, they are heading toward a small campsite where a few dozen activists have stayed behind to keep a vigil. A lively 61-year-old from the nearby city of Canakkale is too riled up to take a seat being offered by the younger passengers.

“We went out to protest because we are against gold mines using cyanide. We went to protect our forest, water and animals living in these mountains. We want to live, we don’t want to get cancer,” the retiree said.

Alamos Gold acquired the Kirazli mining project, located in an ecologically rich region of Turkey, in 2010. The construction of the mine has infuriated locals and activists, after the recent release of drone footage showing massive deforestation and revelations that cyanide will be used in the processing of the gold. There has been outrage on Turkish social media and thousands of people from all over the country have come to protest.

“I was born and raised here. My kids will grow up here. I want this nature to be protected, I don’t want it to be destroyed like this,” a 38-year-old English teacher said. “I don’t want a foreign country to come to my country, make a deal and trick the villagers with a bit of money,” she added, referring to local villagers who have been employed by the company. The Globe and Mail granted confidentiality to the protesters, who fear of repercussions for speaking out against a project supported by the Turkish government.

Environmental activists from the Istanbul-based TEMA Foundation, analyzing high-resolution satellite imagery from Google Earth, say that 195,000 trees near the town of Kirazli in the Ida Mountain range have been cut down, instead of the 45,000 stipulated in the original permit.

John McCluskey, chief executive officer of Alamos Gold, said in an interview earlier this month that he doesn’t know the exact number of trees that have been cut down; since the mine is being built in a forest, it is Turkey’s forestry service, and not Alamos, that is responsible for clearing the area.

Mr. McCluskey added that the Turkish forestry service is actively replanting in what he says is a heavily logged region of the country, similar to parts of British Columbia. “Under their management, the forests in [the province of] Canakkale have actually grown. They’ve planted far more trees than they’ve actually harvested," he said. “They’ve planted something like three million saplings just in the past year."

Alamos Gold’s local subsidiary, Dogu Biga Mining, says only 13,400 trees have been cut down, although ecologists, such as Doganay Tolunay from Istanbul University, say this figure is lower because it doesn’t include saplings and ignores the destruction of other plants and wildlife habitat in the 500 acres of forest that’s been clear-cut.

In addition to the mine in Kirazli, Alamos has two more gold and silver mining projects under development in nearby Agi Dagi and Camyurt. The Toronto-based company, with a market capitalization of $3.65-billion, also operates two mines in northern Ontario, as well as ones in Mexico and the United States. 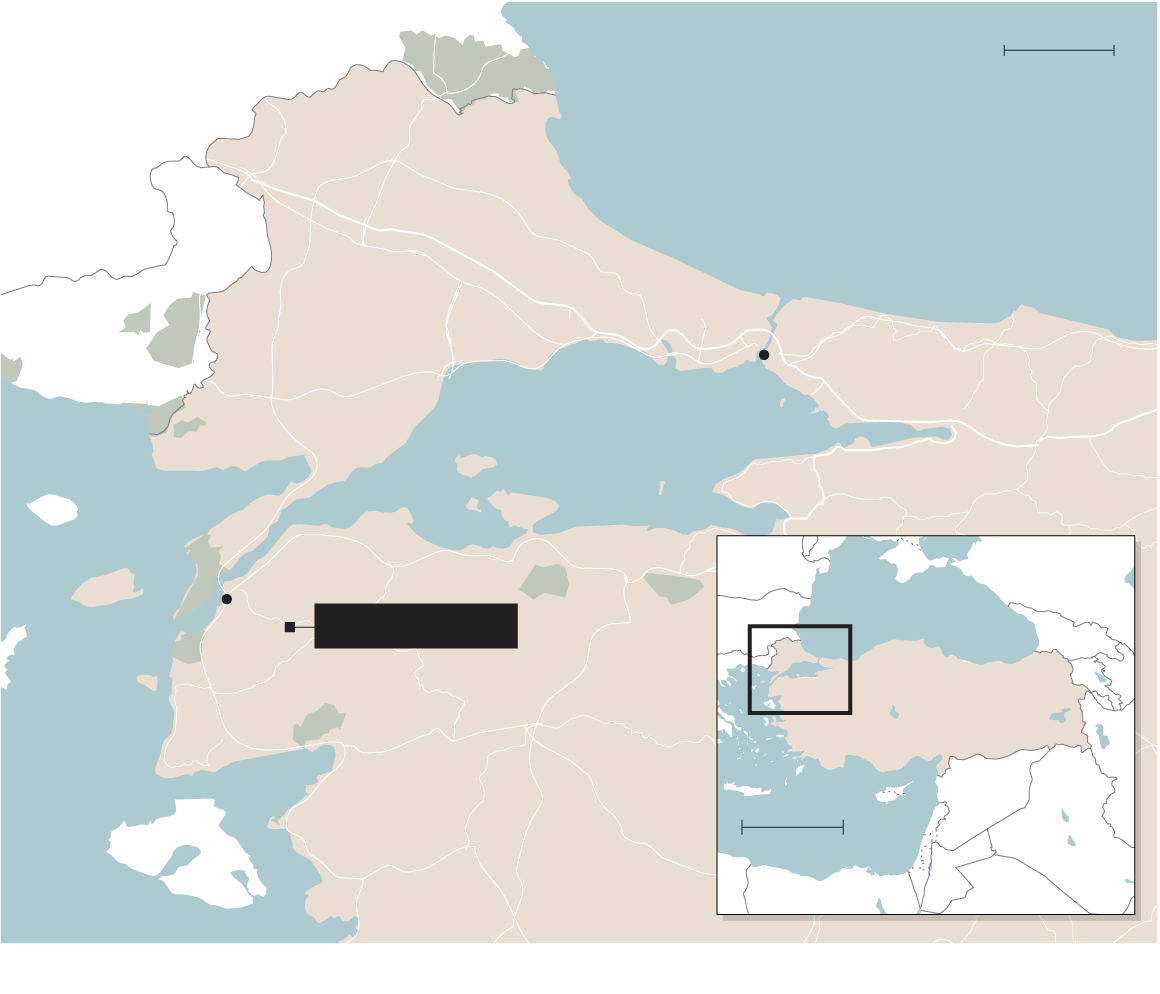 Pinar Bilir, chairperson of the city council’s environment assembly in nearby Canakkale and one of the organizers of the campaign against the mine, doesn’t believe the project will bring any benefits to the region. “Our basic demand is to stop the cutting of the trees, stop the project and open a legal case against whoever approved the environmental impact assessment [EIA] reports,” she said.

The deal was signed with Turkey’s powerful central government, which argues domestic mines are important for reducing the trade deficit and dependency on foreign products. But some locals say they were not adequately consulted.

According to Alamos’s own reports, the corporate tax rate of 20 per cent has been reduced to 2 per cent for the company because of government investment incentives; the company expects to pay 2 per cent in royalties. Alamos says its projects will directly or indirectly result in 2,000 jobs in Turkey, and the country’s economy will earn US$500-million from royalties, taxes and other fees over the course of 15 years.

Ali Furkan Oguz, the former head of the Canakkale Bar Environmental and Urban Law Commission who specializes in environmental cases, says Turkey’s system of EIA reports, required before starting projects that will affect the environment, isn’t up to global standards.

“Companies give money to [EIA] consultancy agencies and ask them to prepare a report, and afterwards the government approves it,” he said, adding that the government almost never rejects them.

Deniz Bayram, a lawyer from Greenpeace Turkey, backs Mr. Oguz’s claims. “In Turkey, it’s difficult to say that EIAs are conducted through independent, reliable organizations. Instead, the EIA companies are paid by the project owner, and the reports are generally prepared with [missing pieces] and false assessments,” Ms. Bayram said.

Activists say the clear-cutting threatens the region’s hundreds of plant and animal species, some of which are only found in Turkey.

They have also objected to Alamos Gold’s planned use of cyanide in the processing of gold at the site, saying the toxic chemical could leak into a water basin shared with the Atikhisar Dam, which is 14 kilometres from the mine and is the sole water supply for 180,000 people.

Alamos plans to use a processing method called heap leaching to extract the gold.

In such a system, crushed ore is mixed with a cyanide solution in a giant enclosed pad. Over a period of months, the mixture slowly dissolves the gold from the ore. Mr. McCluskey, who has 40 years of experience working with heap-leach technology, defended it as a “very safe," processing method.

“We’re talking about double-lined ponds with a leak-detection system built into it, engineered to the nth degree. Your whole objective is a zero-discharge process,” he said.

In 2017, Barrick Gold Corp. experienced a pipe rupture at its heap-leach facility at its Veladero mine in Argentina’s San Juan province, resulting in its third cyanide spill in 18 months. The Argentine government subsequently restricted Barrick’s use of cyanide on-site for three months after the leak.

Jamie Kneen, of Ottawa-based non-governmental organization MiningWatch Canada, says the method in which cyanide will be used in Alamos Gold’s Kirazli project is risky. U.S. officials allege rubber-lining pads failed at a Colorado gold mine in Summitville operated by Vancouver-based Galactic Resources and the EPA also said environmental damage in the area of Colorado was the result of leaks from mining in the area, not from a single spill. The resulting environmental disaster cost the U.S. government US$130-million. It also led to a voluntary settlement in 2000 with Canadian mining executive and Galactic co-founder Robert Friedland. The Czech Republic and states in the U.S. (Montana and certain Colorado counties) and Argentina (Chubut) have banned heap leaching.

“Alamos has insisted that there will be no leaks or spills because they will have a double-layer plastic liner. It is simply impossible – and irresponsible – to assert that there will be no leaks; it is a question of when and how much,” Mr. Kneen said, referring to a Reuters interview in which Mr. McCluskey said the company had taken steps to make sure a leak and watershed impact was “impossible.”

Mr. McCluskey said that in the highly unlikely event of a leak, because the site is downstream of the water reservoir in question, it would be physically impossible for any discharge to flow “uphill.”

Sylvain Leclerc, a spokesperson from Global Affairs Canada, says the government is monitoring the situation in Turkey.

“Regardless of where they work, we expect Canadian companies to respect the law and human rights, to operate transparently in consultation with local governments and communities, and in a socially and environmentally responsible way,” Mr. Leclerc wrote in an e-mail.

Countries such as Turkey with weak rule of law can be attractive to Canadian companies because of their flexible regulations, Mr. Kneen said.

“When [mining companies] are investing internationally, they’re looking for low cost and profitable operations, and part of low cost is low compliance cost, low regulatory cost. Not having to spend a lot of time doing environmental-impact studies, not having to spend a lot of extra money on environmental safety and so on. I think that’s the attraction of international operations for these guys,” Mr. Kneen said.

Earlier this year, the Canadian government appointed Sheri Meyerhoffer as Ombudsperson for Responsible Enterprise, intended as a watchdog for Canadian companies’ activities abroad. Ottawa says it is the world’s first such office. But Mr. Kneen says the position lacks teeth – it can’t compel witnesses or conduct its own investigations – and has ended up merely as an advisory role.

“They failed to give it the powers of investigation that would be required to make it actually work,” he said. “The bottom line is this industry works best when it’s really strictly regulated.”

In July, all 14 civil-society and labour-union representatives on a federal government advisory panel focusing on Canadian companies operating overseas resigned in protest over the failure to give the new ombudsperson significant powers.

Alamos says despite the protests, the mine construction remains on schedule. Kirazli is projected to start up late next year and will produce an average of 100,000 ounces of gold over a six-year period. Kirazli is Alamos Gold’s first foray into Turkey and Mr. McCluskey says he’s eager to make it a “showpiece.”

“If I didn’t think I could build a very safe, sound project that would bring a lot of value to Turkey, I just wouldn’t be here,” he said.

Editor’s note: An earlier version of this article incorrectly described Robert Friedland as president of Galactic Resources when it went bankrupt in 1992. In fact, he was co-founder. Also, the US EPA has said the environmental damage in the area of Colorado was the result of leaks from mining in the area, not from a single spill.

Nick Ashdown is a freelance journalist based in Turkey.