Just three weeks before war erupted in northern Ethiopia, there was an unusual guest at an Ethiopian military base.

The visitor was Eritrea’s authoritarian leader, President Isaias Afwerki, who has ruled without elections for 27 years, creating one of the world’s most repressive regimes. His host was Ethiopian Prime Minister Abiy Ahmed, a former intelligence officer in the military that had fought a brutal border war with Eritrea for years.

The unlikely friendship between the two former enemies led to a historic peace agreement in 2018 and a Nobel Peace Prize for Mr. Abiy last year.

But today their friendship is fuelling a war that threatens to tear Ethiopia apart.

Because of Mr. Abiy’s close relationship with Eritrea’s dictator, Ethiopia’s military has been able to cross freely at the Eritrean border as it wages war against the rebellious Tigray People’s Liberation Front (TPLF) – the common enemy of both leaders.

Mr. Abiy’s soldiers have reportedly used Eritrea’s airport as a supply and transit hub for their military offensive in Ethiopia’s Tigray region. Other reports say Eritrean forces near the border have supported the Ethiopian troops, trapping the rebels in a pincer movement from north and south.

Mr. Abiy has repeatedly vowed that the war would be short and victorious. But after 16 days of war, his military offensive has bogged down in mountainous terrain. Heavy fighting was reported Friday near the town of Korem, about 170 kilometres south of Tigray’s capital, Mekele. A university in Mekele was reportedly hit by an air strike from an Ethiopian warplane, while a volley of TPLF rockets struck the town of Bahir Dar in neighbouring Amhara region.

At the beginning of this week, Ethiopian officials said they expected to capture Mekele within days. But the U.S. ambassador to Ethiopia, Michael Raynor, told journalists Thursday that the Ethiopian government is now estimating the war could continue for another two weeks.

More than 30,000 refugees from Tigray have fled to neighbouring Sudan, and United Nations agencies there are preparing for as many as 200,000. Many of the refugees are injured, traumatized and “highly distressed” from witnessing extreme violence in Tigray, according to a report by Will Carter, the country director in Sudan for the Norwegian Refugee Council.

The Ethiopian military continues to blockade the region, despite pleas from humanitarian agencies. The UN children’s agency, UNICEF, estimated that 2.3 million children in Tigray need humanitarian aid and cannot be reached.

The full extent of military co-operation between Eritrea and Ethiopia is difficult to ascertain, since Tigray is entirely cut off from the outside world. Ethiopia has shut down all telephone and internet access in the region and has barred journalists from entering.

Since the beginning of the war, the government has jailed six Ethiopian journalists, suspended the press permit of a Reuters correspondent and issued warning letters to other foreign correspondents, according to local media.

Laetitia Bader, the Horn of Africa director at Human Rights Watch, described it as an “information blackout.” The Ethiopian government is seeking to evade any independent scrutiny of its military offensive, Ms. Bader said in a tweet Friday.

Because of these restrictions, it is impossible to verify Eritrea’s exact involvement in the conflict. Eritrea itself, often called the North Korea of Africa, is even more difficult for journalists to enter.

The TPLF has alleged that Eritrea sent large numbers of soldiers into Tigray and allowed the United Arab Emirates to deploy military drones into the region from an Eritrean air base. Eritrea has denied these claims.

It is clear, at a minimum, that Eritrea has allowed Ethiopian troops to cross its border. Redwan Hussein, a spokesman for Ethiopia’s emergency task force for the Tigray conflict, confirmed last week that federal troops had entered Eritrea to regroup, then returned to Tigray to continue fighting.

The TPLF fired missiles at Eritrea’s capital, Asmara, on Nov. 14, claiming the attack was retaliation for Eritrea’s support for the Ethiopian offensive.

The partnership between the Ethiopian and Eritrean leaders has grown warmer in the two years since Mr. Abiy ascended to power as Prime Minister. They have held nine meetings since then – and the two latest have included visits to military bases, suggesting they have a shared interest in military co-operation.

In July this year, Mr. Abiy visited Eritrea’s military training base, Sawa, where he inspected the troops and watched a parade of soldiers and equipment. It was the first time a foreign leader had been allowed to visit the base, according to Martin Plaut, a British-based expert on Eritrea.

“Abiy and Isaias are very much the same kind of people,” Mr. Plaut said in an interview. “There’s a close relationship between them. They both see themselves as visionaries who will reshape the Horn of Africa together.”

For both leaders, the TPLF is the enemy. Mr. Isaias sees the TPLF as the leader of the Ethiopian regimes that fought Eritrea in the past, while Mr. Abiy sees it as a recalcitrant force that has tried to sabotage his rule.

When the Tigray war broke out on Nov. 4, the Ethiopian government said it was forced to launch the offensive because the TPLF had attacked an Ethiopian army base after becoming increasingly defiant of federal rule. It described the assault as merely a “law enforcement operation.”

Mr. Plaut, however, said he suspects that Mr. Abiy and Mr. Isaias have been quietly preparing for a war in Tigray for months.

It is impossible to verify this theory. But in an interview with The Globe and Mail in Asmara in December, 2018, an Eritrean official said the country needed to maintain its traditional system of long-term military conscription – even after the peace agreement with Mr. Abiy – because of the danger of a war with its TPLF enemies. 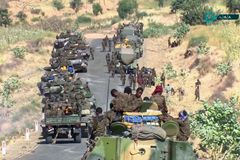 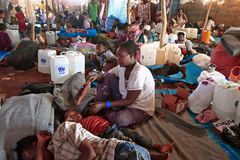