U.S. President Donald Trump disrupted the first day of the Group of Seven summit, calling for Russia to be readmitted to the exclusive club and batting aside strong objections from Prime Minister Justin Trudeau and other leaders to his protectionist trade and tariffs policies.

The President’s suggestion to bring Russia back into the G7, which represents more than 60 per cent of global net worth, was heavily criticized by most of the leaders and leading U.S. politicians.

“Canada’s position is absolutely clear that there are no grounds whatsoever with its current behaviour to let Russia back into the G7,” Foreign Affairs Minister Chrystia Freeland told reporters as she listed Russia’s annexation of the Crimea peninsula, interference in democratic elections and the poison-gas attack on a former Russian double agent and his daughter in Britain.

Even before he arrived at the summit in the picturesque town of La Malbaie, Que., on Friday, Mr. Trump had skirmished over Twitter with Mr. Trudeau and French President Emmanuel Macron over stiff U.S. tariffs on steel and aluminum from Canada, Europe and Mexico.

Mr. Trump doubled down on his tough trade talk with the U.S. allies before he boarded the plane to Canada.

“We have massive trade deficits with almost every country. We will straighten that out. And I’ll tell you what, it’s what I do,” he said.

But the President was in a more lighthearted mood when he held a bilateral meeting with Mr. Trudeau late on Friday afternoon.

“Justin has agreed to cut all tariffs and all trade barriers between Canada and the United States,” he joked, but also urged the Prime Minister to cut Mexico out of the troubled NAFTA talks − a suggestion already rejected by Mr. Trudeau.

“It could be that NAFTA will be a different form. It could be with Canada, with Mexico, one-on-one agreement. Much simpler agreement, much easier to do,” he said.

However, during the meeting with Mr. Trudeau, a senior Canadian official said the President agreed to “accelerate” the NAFTA negotiations rather than pursue bilateral talks.

In his meeting, Mr. Trudeau made the case once again against the U.S. tariffs and pressed Mr. Trump to not levy similar tariffs on Canadian auto exports, an idea being contemplated by the White House.

Ms. Freeland made it clear that Canada can’t accept the tariffs and will retaliate to protect Canadian workers.

“Canada will not change its mind when it comes to the absolutely illegal and unjustified application of tariffs on steel and aluminum, not only coming from Canada but the steel and aluminum sold by all the G7 allies,” Ms. Freeland said.

The Foreign Affairs Minister said she found it “sad” that Mr. Trump used national security as the excuse to impose the tariffs on Canada and Europe, which are part of NATO, while Canada is a partner with the United States in the the North American Aerospace Defence Command.

“Canada has already raised cases at the WTO and at NAFTA and we will retaliate but we say that with great sadness especially here,” she said.

Mr. Trump’s stunning remarks on Russia added to already fraught talks at the G7 and leave him more isolated. It may also add to concerns in the United States and among allies that the U.S. President, whose campaign team is under investigation for possible collusion with Russia, is too close to the Kremlin.

“They threw the Russians out. They should let Russia back in. We should have the Russians at the negotiating table,” Mr. Trump said before departing for Canada.

Russia was invited to join the world’s largest industrialized democracies in the 1990s after the fall of the Soviet Union when the West held out hope that it could become a successful democracy.

British Prime Minister Theresa May said there could be no talk of Russia returning to the G7 table until it demonstrated that it is “amending its ways and taking a different route.”

German Chancellor Angela Merkel said Russian reinstatement “can’t happen until substantial progress has been made in connection with the problems in Ukraine.”

At the G7, only Italy’s new populist Prime Minister Giuseppe Conte said he agreed that Moscow should be back in the fold.

Russia appeared to reject the idea of rejoining. Kremlin spokesman Dmitry Peskov said that “Russia is focused on other formats apart from the G7.”

Mr. Trudeau and the leaders of France, Germany and Britain have tried for most of Mr. Trump’s 16 months in office to develop a cordial relationship in the hope of steering him away from his protectionist agenda – without success.

Since Mr. Trump slapped tariffs on steel and aluminum, these leaders have taken a more confrontational approach. Canada and Europe were also taken back by Mr. Trump’s decision to pull out of the Iranian nuclear deal.

It remains uncertain whether the leaders can even agree to a final communiqué. Mr. Trump is leaving the summit early, before it is over on Saturday.

But all the leaders did endorse Mr. Trump’s historic denuclearization talks with North Korean leader Kim Jong-un in Singapore next week.

Opinion
Inside Trump’s strange G7 ploy to get Putin back in the fold Subscriber content
June 8, 2018 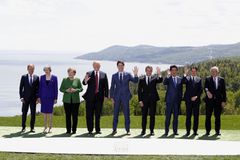 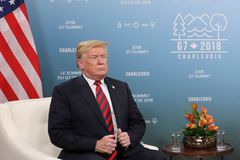 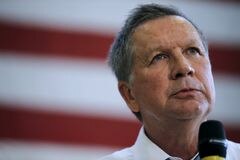