Inside local government offices and at health checkpoints across China, the foot soldiers in a fight against a viral outbreak have been tasked with two conflicting priorities: Vanquish the virus and revive the economy.

From on high and from below, China’s leaders and their large cohort of workers have demanded a “people’s war” to halt the spread of COVID-19 while simultaneously pushing for the resumption of work, in the hopes of restarting businesses and manufacturing output.

Caught in the middle are the officials and Communist Party members facing the inherent contradictions of that mandate.

Those local functionaries carry little of the authority wielded by the central government.

But their actions have done more to influence the trajectory of China’s response to the outbreak than pronouncements from high-ranking leaders, who have sought to limit the economic damage of measures taken to fight the virus.

For those formulating local responses, however, fear has focused their attention on health-related restrictions – part of the reason the world’s second-largest economy has shown few signs of flickering back to life as the death toll from the virus approaches 1,400.

Monday was designated the countrywide day of returning to work, but streets across China remain ghostly quiet. Even in some of the most critical manufacturing sectors, the country is still far from getting back to normal: Only half the makers of hand sanitizer are back on the job, and less than two-thirds of medical-disinfectant producers are operational, China’s Ministry of Industry and Information Technology said Thursday.

In virus-stricken Hubei province, as in cities and villages across China, local officials have decided the economy can wait.

“Our determination and stance are clear: There is no way the economy and production can be elevated over epidemic control,” said Peng Xiangjun, a government virus-response contact person in Dawu County, about 120 kilometres north of Wuhan, the capital of Hubei and the epicentre of the outbreak. He spent Thursday registering the personal information of each person entering the county.

“Given the impact and severity of the epidemic in Hubei, we’ve gathered people of all different departments to join the battle – people from high and low levels alike,” he said. “It doesn’t matter if you work for an economics institute or a social-affairs office, at the moment combating the disease is the only thing you must work on.”

For officials, the professional risk of botching the response to the epidemic became plain to see on Thursday when Beijing sacked high-ranking leaders in Hubei, replacing both Jiang Chaoliang, the secretary of the Hubei Provincial Committee, and Ma Guoqiang, the top Communist Party official in Wuhan. Hubei’s senior leadership has been blamed for tardy and ineffective response measures that squandered an early window to contain COVID-19.

Now, with the virus infecting people at terrific speed, economic concerns are less pressing. Construction and factory workers stuck at home without an income “will be able to survive for two or three months, given savings and living costs,” said Yi Bin, who works in the human resources and social security bureau in Tuanfeng, a rural county in Huanggang, one of the hardest-hit cities in Hubei. “Most of them are from the countryside and they should have food stored at home,” he said.

Until Thursday, when a change in the calculation of official figures led to a huge spike in confirmed cases – to more than 52,000 in China – a downward trend over several days had convinced officials that their containment measures, such as lockdowns, were working. Any act that risked undermining such progress held little appeal.

“The epidemic has just reached a turning point,” Mr. Yi said. “Letting people go back to work will destroy everything we’ve achieved so far.”

Mr. Yi has been in isolation for almost a week, after a single case in his residential building led authorities to place all of its 100 households in isolation. He can’t see a way to get people back to work without creating new opportunities to spread the virus on public transit or at work.

“Resuming production is without doubt in conflict with virus prevention – and this contradiction isn’t likely to be resolved in the near future,” he said.

On Thursday, Hubei officials delayed the resumption of work until Feb. 20 at the earliest. But internally, that date has already been put off until Feb. 29, a traffic bureau official in Wuhan said. The Globe is not identifying the official because they were not authorized to release that information to the media.

In the meantime, local authorities continue to impose new restrictions. In Yingshan County, another Huanggang district, all bridges except one have been closed and roadblocks installed on main streets. This week, residents were barred from buying cold and fever medicine without a doctor’s authorization, and local functionaries maintained posts across the county to enforce strict measures.

Chen Shuaiqiang, a math teacher who began work at the bureau of technology, economy and information in 2018, has spent her days monitoring one of the county’s supermarkets. She counts customers to ensure the number inside does not exceed 30, the limit set by local officials. She registers the temperature and personal information of each shopper, distributes disposable gloves and keeps people 150 centimetres apart, even in checkout lines.

Once, she detected a person with an elevated temperature and immediately called an ambulance. But “it turned out that his temperature was fine,” she said. The handheld forehead thermometers that have become ubiquitous screening tools in China regularly suffer inaccuracies.

Other problems have proven more difficult to resolve. Supermarkets want to equip their staff with protective suits and goggles. “But we don’t even have enough medical supplies in our county for medical workers helping people on the frontlines. How can I give them what they want?” Ms. Chen said. Workers have dressed in raincoats and plastic bags instead.

When people “see someone they know, they will naturally start to chat and forget our requirements. When that happens, we step in and remind them, but then they get mad and complain,” Ms. Chen said.

She, similar to many officials responding to the virus, has not had a day off since Jan. 21.

It’s “war,” she said. But “as for the work itself, it’s just my duty. Only if we overcome this virus can we go back to our happy lives.”

Passengers on ship turned away by five countries over coronavirus fears disembark in Cambodia
March 11, 2020 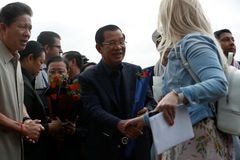 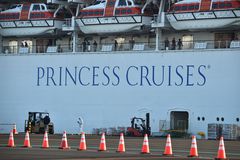