It was a disorienting scene: the President of the United States of America, standing beside the ruler of Russia, refusing to take the word of his country’s own intelligence agencies over that of the autocrat next to him.

In one of the defining moments of his presidency to date, U.S. President Donald Trump accepted Russian President Vladimir Putin’s denial that his country had interfered in the 2016 U.S. election − even though U.S. intelligence agencies have drawn the opposite conclusion − even deferring to Mr. Putin when asked: “Who do you believe?”

“My people came to me, [director of National Intelligence] Dan Coats came to me and some others, they said they think it’s Russia. I have President Putin; he just said: ‘It’s not Russia,’ ” Mr. Trump said, ignoring a follow-up question about whether he would denounce Russia’s actions and warn Mr. Putin against a repeat. “I have great confidence in my intelligence people, but I will tell you that President Putin was extremely strong and powerful in his denial today.”

It was an extraordinary statement, made more striking by the fact Mr. Trump did not raise Russia’s 2014 annexation of Crimea, or the state of Russia’s own democracy, during Monday’s summit in the Finnish capital of Helsinki. The remarks were met with shock across the U.S. political spectrum – including condemnations from senior Republicans such as Paul Ryan – and dismay among U.S. allies in Europe.

The Helsinki summit was always destined to enrage Mr. Trump’s critics, some of whom feared he would make a deal – perhaps over Ukraine or Syria – that would compromise U.S. national interests.

No such pact was signed. In fact, the two leaders announced little of substance at the end of their four-hour meeting, which included a private tête-à-tête that lasted for more than two hours with only translators present. The main outcome was the obvious bond formed between the two men. They hailed the summit as a breakthrough in the relationship between their two countries, and dismissed questions from the international media about their alleged collaboration during the 2016 U.S. election campaign.

Each took a pot shot at their personal nemeses. Mr. Trump slammed the inquiry headed by special counsel Robert Mueller as “a disaster for our country,” while Mr. Putin suggested Moscow would like to question the U.S.-born financier Bill Browder, the driving force behind the Magnitsky Act sanctions against Russia.

For Mr. Putin, the summit will go down as a remarkable success. The West’s policy of isolating Russia – launched by Mr. Trump’s predecessor, Barack Obama – has collapsed. Four years after Russia seized and annexed the Crimean Peninsula from Ukraine, triggering a sanctions war, Mr. Putin stood beside a U.S. President who made no mention of it. Three years after Mr. Putin sent troops and warplanes to Syria to rescue the regime of Bashar al-Assad, Mr. Trump spoke on Monday of a deal in Syria that leaves Mr. al-Assad in place and Russia as the main power broker.

There were also the optics of the President of the United States treating Mr. Putin as an equal, if not more. At one point, Mr. Trump looked on approvingly as Mr. Putin – who has crushed dissent in his country – lectured the U.S. media about how a democracy works.

Mr. Putin admitted he had wanted Mr. Trump to be elected, and that it is “natural to be sympathetic towards a person who is willing to restore the relationship with our country.”

The two men demonstrated a friendly rapport throughout their encounter, smiling as they shook hands three times during a 40-minute news conference.

At one point, Mr. Trump praised Mr. Putin for his “incredible offer” for Mr. Mueller and his team to be present while Russian police interview the 12 suspected Russian agents who were indicted on Friday over the hacking of Democratic National Committee computers and dissemination of e-mails and other documents intended to embarrass Mr. Trump’s election rival, Hillary Clinton.

But Mr. Putin’s offer came with a condition: Russian officers, he said, should be allowed to request and take part in the questioning of U.S. nationals about whom Moscow has suspicions.

“This kind of effort should be a mutual one. Then we would expect that the Americans would reciprocate, and that they would question officials, including the officers of law enforcement and intelligence service of the United States, whom we believe are – who have something to do with illegal actions on the territory of Russia,” Mr. Putin said, as Mr. Trump nodded.

Mr. Putin named Mr. Browder, who lobbied the U.S., Canadian and British governments to impose sanctions against Russia, as one person his country could seek to question. The sanctions laws, which target known human-rights abusers, are named for Mr. Browder’s lawyer Sergei Magnitsky, who was beaten to death in a Russian prison in 2009.

In a telephone interview after the summit, Mr. Browder said he was proud to be so prominently mentioned by Mr. Putin. “This is a great tribute to the power of the Magnitsky Act that Putin is so rattled,” he said.

Beyond the mutual admiration, the most tangible outcome of the Helsinki summit appeared to be a vaguely defined deal over Syria, where regime troops backed by Russian air power are reconquering the southwest of the country, including the city of Daraa, where the anti-Assad uprising began in 2011.

That offensive has brought Syrian government troops close to the Israeli-controlled Golan Heights, sparking fears in Tel Aviv that Iranian forces – which are also allied to Mr. al-Assad’s forces – will try to establish themselves in the region.

Mr. Trump said both leaders had spoken with Israeli Prime Minister Benjamin Netanyahu about “creating safety for Israel,” although neither gave any specifics.

The two men also spoke of a desire to reach a new deal on nuclear weapons, and Mr. Putin said the Russians had given their U.S. counterparts “a number of specific suggestions.”

The summit marked the end of Mr. Trump’s disruptive six-day tour through Europe. Last week, Mr. Trump rattled the North Atlantic Treaty Organization – created to deter Russian military aggression – with a hint that he could pull the United States out if the allies do not increase their military spending. He followed that with a visit to Britain, where he was accused of weakening the position of Prime Minister Theresa May, whose government is deeply divided over how to handle the country’s exit from the European Union.

But while Mr. Trump used his Twitter account last week to lob 280-character grenades at U.S. allies such as Ms. May and German Chancellor Angela Merkel, he took the opposite tack before the Helsinki summit, declaring in a tweet that “U.S. foolishness and stupidity” had damaged ties between Washington and Moscow.

In doing so, Mr. Trump was embracing one of Mr. Putin’s most dearly held narratives: that U.S. foreign policy – the eastward expansion of NATO, and the wars in Kosovo and Iraq – brought relations to a post-Cold War low, rather than Russia’s annexation of Crimea or its alleged election meddling.

“I think that the United States has been foolish. I think we’ve all been foolish. We should’ve had this dialogue a long time ago; a long time, frankly, before I got to office,” Mr. Trump said when asked about the tweet after the summit. “I think we’re all to blame. I think that the United States now has stepped forward along with Russia, and we’re getting together and we have a chance to do some great things.”

Mr. Putin – the man who could not be isolated, the autocrat who lectures on democracy – showed his approval with a faint smile. 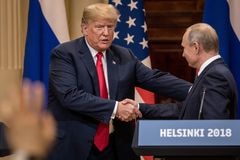 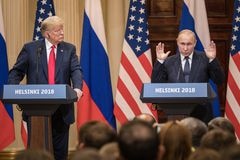