Wayne Chan is winding his way through the narrow sidewalks of Mong Kok, a drop in a stream of humanity, when he suddenly ducks to his left, into a narrow gap barely wide enough for two people to pass. He slips to the end of the passage and waits at the door to an elevator, checking over his shoulder to see if anyone has followed.

He’s not just looking for spies or gangsters – although he’s fairly certain people of those descriptions have also tailed him.

He’s also looking for journalists, the kind who sometimes follow him, photograph his meetings and then splash reports across the pages of Beijing-run newspapers in Hong Kong.

In the past few months, reports in Ta Kung Pao and Wen Wei Po have detailed allegations of his “secret“ relationships and published detailed accounts of meetings he has held.

The two newspapers, which merged in 2016, are controlled by the Chinese government through its Liaison Office in Hong Kong, making them organs of the state press. But where much of China’s official news coverage employs the staid, jargon-heavy expression of dogma, the two Hong Kong newspapers have in recent years employed a new form of state-sponsored reporting: using the tools of journalism as a form of surveillance on activists and critics who have decried what they call Beijing’s increasingly tight grip on the city.

One Wen Wei Po article last summer showed the extent of such surveillance in Hong Kong, with a reporter covertly following Mr. Chan for hours.

Under the headline, “Students Independence Union Decadents Indulge Themselves With Nightclub And Women, Leading A Befuddled Life,” the newspaper provided an exhaustive account of one night in Mr. Chan’s life.

It started with a 6 p.m. rally – Mr. Chan and others shouted “Hong Kong independence!” – followed by another rally; then 8 p.m. dinner at McDonald’s; a bus trip to a bar (arrival time: 10:20 p.m.); a quick excursion to pick up other people at a metro station; a 1 a.m. diversion to McDonald’s for takeaway; a return to the bar (punctuated by “a long-haired girl vomiting”); then another trip to McDonald’s at 4 a.m., followed by a departure by taxi half an hour later.

The paparazzi-style coverage would not be out of place in the pages of the entertainment press. But Mr. Chan does not fit the normal definition of a celebrity – he convenes the Students Independence Union and has publicly called for Hong Kong to pursue independence.

“I have no career pathway, no job pathway and I tell myself every day – what is my purpose for my life? To make Hong Kong independent,” he said.

His views have made him an object of interest for local authorities, and the Chinese government overseeing Hong Kong, which has sought to stamp out local expressions of sovereignty. Observers say aggressive reporting tactics employed against people such as Mr. Chan are one facet of the response.

“The purpose is to send a message, trying to lower the credibility of the person,” said Rose Luqiu, a journalism scholar at the Hong Kong Baptist University who is a former television reporter in the city.

“The second is to intimidate, to make them fear, to create a chilling effect.”

It’s a kind of innovation with potential global ramifications, since Hong Kong is often used as a piloting area for strategies subsequently used elsewhere.

The city is “a testing area, so they can test different tactics in an open society,” Prof. Luqiu said. For Beijing, “Hong Kong is a trial for how the media and propaganda works.”

Indeed, the use of such tactics in Taiwan prompted a warning from the President’s office in January that Ta Kung Pao has been “unlawful” in its surveillance of people, and had disseminated “fake news.”

In Hong Kong, meanwhile, the effort to stamp out talk of independence – which is a direct challenge to Beijing’s control of Hong Kong – prompted local officials last year to ban the Hong Kong National Party, the city’s first openly separatist political party.

“On all fronts, you can perceive that [Beijing] increasingly gives the impression that they don’t much care how their actions are perceived,” said democracy activist and former Hong Kong chief secretary Anson Chan. “They are determined to demonstrate who is the boss, and determined to make people toe the line and mete out punishment to those who don’t.”

A broader effort is also under way to more closely link Hong Kong to mainland China, through new bridge and high-speed rail links, as well as a law that bans mockery of the Chinese anthem and consideration of a new extradition-like agreement.

Those shifts form the backdrop to the intense coverage by the city’s Beijing-controlled newspapers, whose reports can be so detailed that Baggio Leung, who was among those booted from the legislature over oath-taking, refers to them as “just like a diary. They are more accurate than my Facebook account. If you have forgotten what day you met someone or where you went, you can check it in Ta Kung Pao.”

The attention he receives from newspapers and others – he cites gangsters and security services as others whom he believes follow him – has changed his own life. He describes the circuitous route he took to meet The Globe and Mail at a coffee shop, using techniques to shake a tail gleaned from a local private investigator. “This is a common skill now in Hong Kong activist circles,” he said.

“To us it is normal. But actually, it is quite strange and quite dangerous right now in Hong Kong,” he said.

That investigator is a young employee at a private security firm, who gives his name only as Mr. Lee because his employer has not sanctioned his work with people like Mr. Leung.

Mr. Lee has trained several dozen people, but says the dangers are growing for activists as they become the object of more acute attention – including from the city’s newspapers.

Wen Wei Po coverage of activists has included accounts of purported love triangles and pointed observations of conduct considered suspicious. In one report late last year, Paladin Cheng, an independence activist, was described as walking away from a meeting while casting furtive glances in a “very sneaky” way. The reports have a real impact: When Mr. Cheng took time off after a surgery, Wen Wei Po reported that he had not been to work. His company sent him a warning letter.

He has also encountered other more direct forms of intimidation: People who he calls “gangsters” have come to his house; at Christmas, he received a greeting card from an unknown sender at his friend’s house, which he took as a sign his whereabouts have been monitored.

But the intensive newspaper coverage offers its own kind of threat.

“They will expose you to the public, to let the public know that you are against the government,” said Ronald Leung, who has worked with the North District Parallel Imports Concern Group, which has protested against the smuggling of goods from Hong Kong to China.

The Globe was unable to obtain comment from either Beijing-controlled newspaper.

Australian academic Kevin Carrico has experienced the coverage firsthand. He noticed someone following him on a December trip to Hong Kong – a woman wearing an Oxford University sweatshirt who he noticed on the subway, then at a shopping mall, even at the mall bathroom. Wen Wei Po later made him the centrepiece of a front-page report that included photos of him at the airport – suggesting the newspaper had foreknowledge of his travel plans – and called Mr. Carrico, who lectures in Chinese studies at Macquarie University, a ”supporter of Hong Kong independence” who has ridiculed the Chinese government.

Mr. Carrico had come to Hong Kong to deliver a presentation on Chinese interference operations in different parts of the world.

He marvels at ”the amount of energy that went into following me on what was undoubtedly a very boring week.”

But it is indicative of China’s strengthening control over Hong Kong, he said. 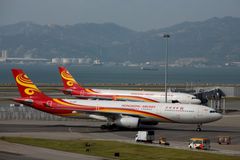 The re-returnees: They came to Hong Kong for the hustle. Now, with China encroaching, they’re coming back to Canada
Subscriber content
January 13, 2019 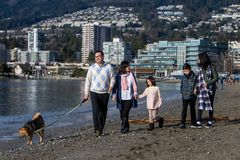 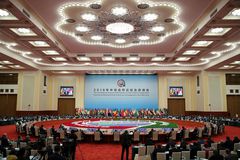