Protesters crowded onto the streets of downtown Hong Kong Wednesday morning, installing barriers on roads and snarling traffic as they prepared for a day of action to protest a bill that would make it easier for authorities in China to extradite people from the city.

Just before 11 a.m., members of the city’s Legislative Council said a scheduled debate on the bill had been unexpectedly postponed, as the city’s political leaders pleaded for peace with a crowd of tens of thousands who took over downtown streets. Police used pepper spray and water cannons against some protesters.

Legislative Council member Alvin Yeung said it was not clear when the meeting would resume. He spoke from a small opening between chanting protesters and police behind large clear plastic shields, who he had come to address in hopes of preserving peace.

“We were asking to speak directly to the most senior rank commanding officer on site to give the person the clearest message that do not use force on these innocent Hong Kong people,” Mr. Yeung said. “They do not have to bear this responsibility. It’s a political issue.”

He came with Jeremy Tam, another council member, who had a simple message: “As soon as they withdraw this bill, all these people will be gone.”

But by noon Wednesday, there was no sign of the crowd dispersing, a large group clad in black, many with masks and some wearing helmets. They erected barricades and lashed them together with zip ties, shutting down main arteries in the financial heart of the city.

They came on a day when social workers, church groups, student associations and workers alliances called for a general strike to allow people to protest the extradition bill. Legislators initially expected to hold a debate toward a second reading of the bill on Wednesday. It could be passed by the end of the month, political analysts have said.

People are “angry. Very angry,” said Nicole Cheng, 22, who came Tuesday night dressed in black and prepared to stay up all night. “Because the government doesn’t listen at all.”

Unlike the co-ordinated Sunday demonstration that filled three kilometres of streets with an orderly procession, calls to protest this week emerged from numerous places, with a wide variety of proposed actions – including demonstrations and a mass cash withdrawal of U.S. dollars, in hopes of affecting the region’s foreign reserves.

The sheer number of calls for civil disobedience threatened to open a new chapter of disarray in a city that has long prided itself on its orderly conduct. Local media reported death threats against Hong Kong chief executive Carrie Lam, who has pushed forward the extradition bill with Beijing’s backing.

Among the groups pledging action Wednesday were small businesses – including bakeries and law firms – saying they would close up shop. Major banks and consultancies advised their employees to use flexible work arrangements in anticipation of disruptions to the city’s downtown core, its commercial heart studded with some of the world’s wealthiest financial institutions.

“With Hong Kong being a financial city and society very polarized at the moment, we don’t expect a complete or near complete participation from all schools and companies. But every little bit helps,” said Jason Y. Ng, convener of the Progressive Lawyers Group.

“We're doing all this because we genuinely worry about what the extradition bill may do to our personal safety and free expression. But more importantly, we are pushing back because we want to send a message to the government and Beijing that we won't take this lying down.”

Political leadership in Hong Kong and Beijing have shown no willingness to alter the extradition bill or delay its passage.

The legal amendments would allow Hong Kong to extradite those accused of serious crimes to jurisdictions with which it has no formal extradition agreements – including mainland China.

Though the bill is intended to allow for extradition only in the case of serious criminal allegations, lawyers and protesters alike say they are concerned Chinese courts, which answer to the Communist Party, will fabricate accusations in order to secure the arrest of people on political grounds.

“People have a strong feeling that the passage of the bill will significantly remove the firewall between the two systems, and would expose Hong Kong people to the realistic danger of being sent back to China for trial,” said Albert Ho, a lawyer and former legislator.

That prospect has made the bill a focal point for unease over Beijing’s efforts to integrate the city into the mainland. Hong Kong was promised a high degree of autonomy under the “one country, two systems” formulation when it was handed over to Chinese control in 1997. The city retains a dramatically different social and political environment, with open Internet access, respected courts and a freedom to assemble express the sorts of critical thought that would result in arrest and imprisonment for people in China.

But China under president Xi Jinping has pursued an increasingly assertive foreign policy, and worry has grown that Hong Kong’s liberties are eroding as Beijing exerts control. In 2014, Beijing rejected demands for greater local democratic control that led protesters to take over city streets for three months during the so-called “Umbrella Revolution.” A new bridge and high-speed rail links have made Hong Kong a node on China’s national infrastructure network.

The extradition bill promises to forge new judicial links, too, between Hong Kong and China.

Political analysts say its passage is a foregone conclusion.

Among those standing Tuesday night was Henry Kam, a recent university graduate.

“Although I can’t do anything because they are so strong,” he said, referring to China, “I can be one of those who join the protest. Power comes from people coming together.”

Hong Kong presses ahead with extradition bill despite protests
June 10, 2019 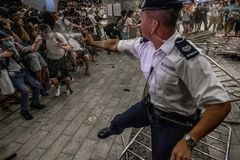 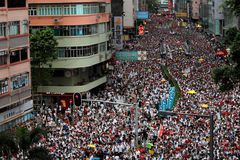 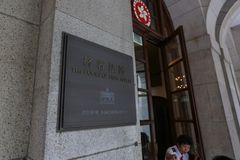