As the world wrestled with COVID-19 outbreaks last year, the critical role played by women political leaders in steering their countries toward recovery won considerable acclaim. In India, too, leaders such as K. K. Shailaja, Kerala state’s former Minister for Health and Family Welfare, were praised for their work and rapid response to the COVID-19 crisis.

The accolades have also fuelled calls for more women globally to be at the top of the political pyramid. But in India, the representation of women in politics declined from 23 per cent in 2019 to 9 per cent, according to the Global Gender Gap Report 2021 by the World Economic Forum. Ms. Shailaja herself was dropped as a minister in a recent cabinet shuffle.

Cultural and social hurdles hold women back from running for public office in India, such as gender discrimination, deep-set patriarchy, illiteracy and the threat of sexual violence, much of which has also proliferated online. Though women form nearly half of Indian voters, political experts say the steadily declining female labour-force participation, which fell to 20.7 per cent, could be the reason behind the drop in representation of women in politics as well.

That drop has prompted several women-led organizations to bridge the gender gap by kick-starting political leadership programs to advance their participation in public life and build a political consciousness.

One of them is NETRI Foundation, a women’s political incubator that founder and policy researcher Kanksshi Agarwal calls a “one-stop shop for first-generation women in politics.” Collaborating with a team of facilitators from different disciplines and political leaders, the organization has trained about 350 women across rural and urban India, from ages 18-55, through 4-to-6 week programs.

In interactive virtual sessions, participants discuss barriers to political participation, hone their leadership skills, learn about community building, and are equipped to run for elections. Another continuing initiative is the Samaanta (Equality) Ambassadors program, to build a community of political trainers who can nurture future women leaders.

“As part of my work on the campaign trail a few years ago, I noticed the women in the field were stereotyped and banded together under women’s wings of political parties and were sent out to mobilize women and only talk about women’s issues,” Ms. Agarwal said.

“Women are always on the front lines as the silent work force, but become invisible due to complex power structures. In politics too, their careers have been stunted due to societal barriers. They lack the social capital and mentorship it requires. With the declining rate of women in the work force, they don’t have the assets to launch a political career.”

Of the three million elected representatives at the village council level, 43 per cent or 1.3 million are women. But further up in the political hierarchy, their numbers fall dramatically, mirroring the gender gaps in corporate jobs.

Ms. Agarwal, who has been drawn to the world of politics since she was a child, said she has shaped NETRI to become a ladder that helps women rise through the political ranks. During COVID-19, conversations between politicians-in-training and their facilitators have touched upon how political and citizen leaders responded to the pandemic. They discussed how a leader can weave an urgent crisis like this one into their agenda to serve a larger purpose.

The organization also widened its reach by collaborating with other groups to form the She Leads initiative to empower another cohort of women political leaders.

One of NETRI’s newest graduates is S. Sujitha, 32, who runs a non-profit in Chennai, Tamil Nadu. She was looking for ways to expand her reach to women in rural areas when she came across the program on social media.

Over the next few weeks, she learned about effective political communication, how to use social media to build her public narrative, understanding her constituency and the nuances of gender intersectionality. “It was an eye opener,” she said.

Soon after she completed the course, she was appointed the spokesperson of a political party. “As I went on the campaign trail, I realized how uneven the ground is for women in politics,” she said.

“In the next five years, I plan to contest in state elections. People had warned me politics is dirty, it won’t suit me, and that I will be shamed as a woman. But I think it can be done differently too.”

Another vocal voice who is part of this growing movement to amplify women’s leadership in politics and bring systemic change is activist Angellica Aribam. She is the founder of Femme First Foundation, which launched the flagship “She Runs Government” fellowships, six-month programs for capacity-building, training and mentoring of women in politics by top politicians.

Ms. Aribam, who entered politics at 20 in 2012 and served as the national general secretary of the students’ wing of the Indian National Congress, said she wished she had a mentor back then to show her the ropes.

Building a community for women leaders is her way of ensuring that other women receive what she didn’t. “India’s political system is mired with sexism – outright denial of opportunities to women, tokenism, physical and sexual violence, online trolling. … I have lived and faced it all. In order to push back and survive, I constantly endeavoured to upskill and equip myself with new ideas and best practices of politicking,” said Ms. Aribam, who is based in Delhi.

“With no organization in India focused on women politicians and no intraparty institutional support, it wasn’t easy. … During my time as a fellow at Vital Voices, an American NGO, I received mentorship from women prime ministers and formed strong bonds with women politicians from various countries. It made me realize how valuable such an ecosystem will be to young Indian women aspiring to be in politics,” she said.

Launched in January this year, the inaugural fellowship cohort consists of 18 women who displayed strong political ambition chosen from more than 150 applicants. They come from diverse backgrounds – nearly 40 per cent were selected from marginalized communities. The program is delivered in English and Hindi, and uses a three-pronged approach – intensive virtual-learning sessions, individual mentorship by seasoned women politicians and residential in-person workshops (the latter slated to begin later this year).

Despite the path for women in politics being unrelentingly tough, there hasn’t been a sustained citizen movement demanding women’s representation, observed Tara Krishnaswamy, a Bengaluru-based technologist who runs Shakti, a voluntary collective trying to bridge that gap.

On its agenda is to push through the women’s reservation bill, which proposes 33 per cent seats in the Parliament and legislative assemblies for women. It has been in limbo for more than a decade, since it was passed by the upper house of Parliament in 2010.

Shakti’s main strategy is to press political parties to field more women, at times by holding protests outside party offices. “There are millions of women at the lower levels, canvassing and campaigning but political parties prevent them from growing to become leaders,” she said.

“They do not field more than 8-to-10 per cent women candidates. There are a lot of falsehoods peddled about women not being winnable, that they are not interested in politics, that they don’t rise up unless they are dynasts. People have accepted them as truths.”

To turn the false narrative on its head, the citizen volunteers of Shakti mobilize themselves whenever there is a coming state or national election to promote women candidates and make them more visible.

“Shakti is a modern collective, fluid and very much rooted in today’s ways of the world,” she said. “We use social media to run creative campaigns, in order to push for fairer policies and join hands with local organizations wherever the election is taking place, such as non profits, health care and education institutions that believe women should be adequately represented, to garner support.”

“It requires sustained effort. It’s an issue that needs to be front and centre of every election.” 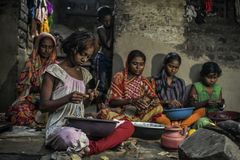