In a desolate field in rural Latvia, a dozen Canadian-made light-armoured vehicles are splayed out, staggered in a seemingly haphazard way. A few hundred metres away, a complement of compact Italian military vehicles are packed together, like they’re huddling for warmth.

Both armies had just spent the afternoon running drills on a military base that sits just over 200 kilometers from the Russian border, as the crow flies.

The Italian and Canadian armed forces are here on Russia’s doorstep as part of a NATO-wide effort to ward off any efforts from Moscow to extend its borders. It’s a mission, drawn up after Russia seized control of the Crimea and Donbass regions of Ukraine, that has only become more relevant in recent months as tensions between East and West have grown.

In Latvia, the NATO battle group is led by the Canadian Forces. In Estonia, it’s Britain; in Lithuania, the Germans run the show; and in Poland, it’s the Americans.

It’s the type of mission that Canada hasn’t been a part of since the end of the Cold War. The 1,100-plus soldiers in the Latvian-based battle group are being helmed by 450 Canadians, but it’s a hodgepodge of different militaries. Spain contributed 300 troops; Italy and Poland sent 160 apiece; then there’s 50 Slovenians and 18 Albanians.

The mission has proved popular in the region, although NATO itself has, once again, become the target of the U.S. President. Shortly after a disastrous Group of seven meeting in Charlevoix, Que., — one where Donald Trump openly suggested reinviting Russia into the fold — he launched a Twitter attack on America’s allies, lamenting that it is getting “clobbered” on trade from Canada and others and complaining that “we protect Europe (which is good) at great financial loss.” His thread promised “change is coming!” And while there’s no doubting that the United States shoulders much of the cost for NATO operations, the Latvian deployment, with Canada at the helm, is being undertaken without U.S. involvement.

In a drab conference room on the Adazi base where the multinational battlegroup is stationed, Lieutenant-Colonel Sean French, the Canadian currently in charge, explained that the mission is something they’re still getting used to.

“Some of our NATO allies we don’t traditionally work with as much,” Lt.-Col. French said. “We fit much easier with the Americans, the British, or the French - some of our more traditional partners.”

That is to say, Canada doesn’t find itself training with Albania very often.

The exercises don’t look very impressive. In one, the armoured vehicles drive ahead, hold their position, and cover their allies as they catch up, inch-worming slowly ahead through pretend enemy territory.

Major Matt Rolls, the commanding officer for the Canadian light armoured vehicles, explained that when militaries integrate on a micro level, there’s plenty of kinks that need to be worked out. Communications, for example.

Maj. Rolls’s officers were training with an Italian company — they had been training with the Spanish, the day before, as they rotate in-and-out the various members of the battlegroup — and the radios hadn’t been communicating properly. Maj. Rolls got an earful of static while trying to co-ordinate with the Italians. “There’s gremlins,” he said, grinning.

Some of our NATO allies we don’t traditionally work with as much. We fit much easier with the Americans, the British, or the French - some of our more traditional partners.

Figuring out how to work with some of its allies and deal with problems as they arise is requiring a lot of “relearning,” as Lt.-Col. French put it. But this isn’t, technically, a training mission: It’s about deterrence.

“In 2014, when the intervention in Ukraine happened ... the rose glasses were taken off,” said Janis Garisons, Latvia’s State Secretary of the Ministry of Defence.

Inside the Ministry of Defence in Riga, Mr. Garisons explained that while there may have been some skepticism about NATO before the annexation of Crimea, the alliance’s decision to deploy into the Baltics did a lot to prove to the local populations that it could operate effectively.

“The battle groups are here to send a message,” Lt.-Col. French said. He added: “We’re making sure there’s no room for miscalculation.”

Russia, of course, claims it has no plans to march into the Baltics. Kirill Kalinin, the former spokesperson for the Russian embassy in Ottawa, said prior to the deployment in 2016, “Russia is in no way presenting a threat to anyone.”

On the Adazi base, Lt.-Col. French said his team has gone to great lengths to anticipate possible Russian responses and guard against them. There are new high-tech tactics to defeat Russian spies from tapping the cellphones, for example, and to prevent Canadian troops from becoming the subject of Russian propaganda.

Russian media targeted German soldiers in Lithuania in 2017, when it fabricated a story accusing the officers of sexually assaulting a teenage girl. The story was baseless, but took root in the Russian-speaking populations in the Baltics, populations that often feel alienated from their local governments.

Chief of Defence Staff General Jonathan Vance, sitting in his office in the Department of National Defence building in Ottawa, admitted the difficulty in dealing with a country that doesn’t much care for international norms.

Both Gen. Vance and Lt. Col. French said the most effective tool to push back against efforts to discredit the battle group is its PR campaign. The group has its own Facebook page, filled with pictures of the multinational soldiers training, but complemented with photos of smiling soldiers in military fatigues cleaning up litter in Riga, playing hockey with locals, and attending community events. The idea is that as long as the soldiers seem mysterious, there will be room for disinformation campaigns to take hold. The Facebook page makes the deployment look almost boring. 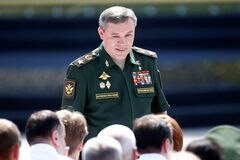