Marlene Diez Padron slipped into a drainage ditch separating Mexico from the Texas border nearly two months ago, believing she was reaching the end of a perilous journey from Cuba and the start of a new life with her daughter in Miami.

Instead, after three days in a U.S. detention centre, Ms. Diez Padron was sent back to the Mexican border community of Ciudad Juarez with a six-month work visa and a growing uncertainty about whether she will ever make it to the United States.

Ms. Diez Padron is among more than 17,000 migrants who crossed the U.S. border to claim asylum only to be told they had to return to Mexico to await their court proceedings, driven largely by an agreement signed between the two countries.

Mexican officials rushed to sign onto the arrangement after President Donald Trump threatened to slap tariffs on exports unless the country quickly stemmed the flow of migrants to the border. The influx this year has reached its highest in more than a decade.

Asylum seekers crossing the border has been a major political and humanitarian issue in the U.S. for years, with no clear resolution. The Trump administration has been particularly aggressive in implementing harsh measures, such as separating families, mass detention and now requiring migrants to wait in Mexico. But the measures have done little to deter thousands from making the long and dangerous journey north.

The surge of asylum seekers travelling through Mexico to the U.S. border has strained relations between the two countries and forced the Mexican government to send thousands of soldiers to its northern and southern borders. In addition, it has had to dramatically expand its fledgling asylum system. With Mr. Trump planning mass deportations starting as early as this weekend, that could mean the potential for thousands more people flowing back across the border into Mexico.

Returned migrants, meanwhile, say they feel stuck in limbo. Mexico has been welcoming, “but we have no business being here,” Ms. Diez Padron says. “We have family in the U.S. We have a life that we want to build. We’re stuck here and we don’t understand why.”

Mr. Trump has cheered the agreement, known as the Migrant Protection Protocol and often referred to as Remain in Mexico, as a major success. Apprehensions at the U.S. border fell almost 30 per cent last month, although they remain near historic highs.

Mexico has also sought to frame the agreement as a win for President Andres Manuel Lopez Obrador’s six-month-old government.

Officials argue that migrants represent an economic opportunity for the country. They also contend that treating asylum seekers humanely will help build international support for its proposed development plan for Central America. “This has elevated Mexico’s position on an international level,” said Juan Carlos Loera, the elected representative for Juarez who belongs to Mr. Lopez Obrador’s National Regeneration Movement. “It’s a demonstration of the diplomatic talent of the Mexican government.”

The Remain in Mexico agreement has long-term implications for the country. Many migrants can expect to stay in Mexico for months, if not years. Officials in Juarez say some migrants have returned with U.S. court dates as late as October, 2020.

In Juarez, which has received more than 8,600 returned asylum seekers – the most of any border city – government leaders announced plans this week to speed processing of work permits, social-security numbers and bank accounts for migrants.

Local businesses say they hope migrants can fill thousands of job vacancies, many of them in maquiladoras – export-oriented factories that line the border. “If they’re able to work, many of them are going to be willing to stay here and wait their turn," said Enrique Valenzuela, director of a state-run migrant-assistance centre in Juarez. He added that if many ultimately choose to settle permanently in Mexico, it could be a turning point in the migrant crisis.

Analysts and religious leaders, however, warn that the country’s immigration system remains ill-equipped to handle the influx of asylum seekers. They worry that Mr. Lopez Obrador’s government acceded too quickly to U.S. demands without negotiating any financial assistance to support migrants waiting in the country. In addition, they accuse the Trump administration of abandoning the U.S. commitment to international treaties that protect the right of those fleeing persecution to claim asylum when they reach the United States.

“It sets the precedent that Mexico will do what the U.S. will ask for without really demanding much in return,” said Jesus Pena Munoz, a researcher in Juarez with the Northern Border College, a Mexican research institute specializing in border and migration.

And criminal gangs are taking advantage of the influx. Church leaders say migrants are frequent targets of exploitation, kidnappings and rapes by gangs. Many asylum seekers released at the Mexican border turn down offers of rides to local shelters, saying they are waiting to be picked up by family members. Then they call their polleros – human smugglers – to arrange to be taken back across the U.S. border. The problem is so rampant, some shelters now require migrants to hand over their cellphones to prevent them from contacting smugglers.

“The migrants are like a river full of big juicy fish and all the fishermen are getting together to make a profit,” says Sister Maria Guadalupe Velasco, whose Catholic church is among a network of faith groups who travel twice daily to the border to greet returned migrants.

Migrants themselves say they have struggled to find work and to afford the soaring costs of hotels or makeshift accommodation in the city.

Since being returned to Juarez, Ms. Diez Padron has started passing out flyers for a restaurant in the city centre. She earns 150 pesos ($10.30) a day, barely enough to cover her rent.

So far, public sentiment in Juarez has been positive toward migrants, Dr. Pena Munoz says. Whether that remains the case will depend largely on how successful the Mexican government is at integrating migrants into society. That will require overhauling the country’s immigration system – historically designed to help Mexican nationals deported from the U.S.

“As soon as people start looking at migrants as a negative thing, all the doors will shut,” he says. “We’ve seen it in Europe what happens when people’s opinion of migrants turns negative.”

But the biggest challenge to Mexico’s plans to integrate returned asylum seekers may be that most migrants remain desperate to get to the United States.

Local officials in Juarez don’t have estimates of how many returnees may have already crossed back into the U.S. illegally, but suggest that it’s a high percentage.

Pollsters in Mexico say that nearly 90 per cent of migrants surveyed tell them they have no intention of staying in the country. The strong drive to get to the U.S. is likely to undermine Mr. Trump’s push to demand both Mexico and Guatemala become safe third countries for asylum seekers, Dr. Pena Munoz said.

Rather than deterring migrants from claiming asylum in the U.S., many say the long waits to cross and the Mexican National Guard soldiers stationed along the border, are instead pushing migrants toward more risky illegal crossings through deserts and swift-flowing rivers.

Ms. Diez Padron says the prospect of her first court appearance, set in El Paso, Tex., next month, has motivated her to keep waiting in Mexico for now. But she is less certain of how she will feel after that. Last weekend, she learned she will likely be returned to Juarez to await future hearings. “Even though I’m staying in one place now, I feel like I’m still in the middle of the journey,” she said. “This isn’t the place I want to be.” 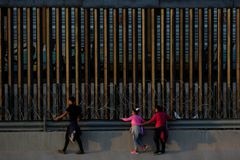 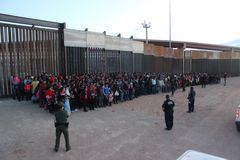