In the wake of a military coup, the Myanmar public has shown a fiercely unified front in opposing the new regime and restoring the civilian government. But protests look markedly different between areas dominated by the Bamar majority ethnic group and the seven ethnic states which line the country’s borderlands.

At protests in predominantly Bamar areas, including the urban centres of Yangon and Mandalay, elected leader Aung San Suu Kyi’s portrait adorns banners, signboards and T-shirts. Demonstrators chant her name, and many wear red, the colour of her National League for Democracy (NLD) party.

In ethnic states and other areas with large non-Bamar populations, however, many demonstrators are marching in black. “The black is to show the darkness and sorrow of the coup,” said Ko Lucas, an ethnic Kachin living in the Kachin State capital, Myitkyina. “This protest and public demonstration are not only for those supporting the NLD party, but also for anyone against the military coup and dictatorship.

“I don’t want [my children] to grow up with fear and oppression. This is the time to speak out and go against the culture of dictatorship,” he added.

Since Myanmar’s military arrested Aung San Suu Kyi and seized power on Feb. 1, tens of thousands have taken to the streets. The protests, led primarily by youth, began in urban centres and within days had spread across the country, which had only been under a civilian government since 2015, following more than five decades of military and military-backed rule.

In some ways, the protests have brought people together across ethnic and religious divides. “All people against military dictatorship are coming out to protest. It’s not only for one party,” said Po Yay, an ethnic Karenni youth demonstrating in the Kayah State capital of Loikaw. “We can only fight against [the military] when we are united.”

In the Shan State capital of Taunggyi, demonstrators wave not only NLD flags, but flags celebrating their ethnic identities. They join together to drive motorcycles around the city, chanting “No military coup,” singing revolutionary songs and waving a three-finger salute symbolizing resistance to authoritarian rule, according to Win Htal Kaung Myint, an ethnic Shan among youth leading the city’s protests.

But while protesters agree that the military dictatorship must fall, perspectives as to what should come next have significantly diverged as the protests have taken shape.

Aung San Suu Kyi’s international image as a human-rights icon was destroyed after she defended the military’s 2017 genocidal campaign against the Rohingya minority in Rahkine State, but the country’s elected leader, who spent 15 years under house arrest during the former military regime, is widely popular among much of the ethnic Bamar public. Her party resoundingly beat the military-backed opposition this past November, but the coup occurred just hours before officials were set to be sworn in.

Bamar people, thought to make up more than two-thirds of the population, have largely rallied around support for Aung San Suu Kyi and a return to the status quo. For many non-Bamar citizens, however, the demands have gone in a different direction; they are calling for a complete overhaul of a military-drafted 2008 constitution in favour of one based on federal democratic principles. “My expectation is total reform for the country – abolish the 2008 constitution and make another federal-based constitution,” said Ko Lucas in Myitkyina.

The issue traces back to 1947, at the dawn of the country’s independence from Britain, when Aung San Suu Kyi’s father, General Aung San, promised ethnic leaders a path toward federal autonomy in return for their agreement to join the Union of Burma, the country’s former name. Aung San was assassinated months later, and his promise was never fulfilled. Numerous armed groups have since waged rebellions against central rule, leading to some of the world’s longest-running civil wars.

In 2015, Aung San Suu Kyi had pledged to make peace a priority during her term. Instead she repeatedly backed the military against ethnic armed organizations despite the military’s well-documented human-rights abuses targeting civilians. Her government also restricted humanitarian access to conflict-affected civilians and imposed the world’s longest internet shutdown in parts of Rakhine and Chin States.

These actions have left many people bitterly disappointed. “They [NLD] never took an interest in ethnic affairs. Therefore, we faced renewed fighting from 2015 to 2020,” said a 23-year-old ethnic Kachin woman, whom The Globe granted anonymity because of fears for her safety. She fled military attacks on her village in 2011 and now lives in a camp for displaced persons in the town of Waingmaw, near the Kachin State capital.

Although she opposes military rule, she also does not support a return to the situation before the coup. “I worry that we can be excluded if the NLD gets back its authority like before,” she said. “We ethnic groups have to unite because we all want a federal system.”

Mi Vijaya, an ethnic Mon living near the Mon State capital, Mawlamyine, also spoke critically of the NLD government, which she considers another form of dictatorship. “We haven’t only lived under military dictatorship, but also under democratic dictatorship,” she said. “If the elected government gets their authority back, we should also worry, because they can stand on the side of dictatorship.”

Mi Vijaya has not participated in the general anti-coup protests in her city but helped organize a protest among ethnic Mon and Karen people focused on the abolishment of the 2008 constitution and the establishment of a federal democracy. “Even if the military gives back its authority, we will continue fighting to abolish the 2008 constitution,” she said. “Our country can be peaceful only when we achieve a federal system and self-determination.”

As the national protest movement has grown, similar demands have also started to take root in Yangon, Myanmar’s largest city. While the city’s protests have so far been largely focused on support for Aung San Suu Kyi, on Feb. 11, diverse ethnic youth held a protest with the same objectives as the one Mi Vijaya had organized.

The young Kachin woman interviewed by The Globe, who is among more than 300,000 people in the country who remain displaced by conflict, said the current protest movement carries added significance – she hopes it will bring attention to the concerns of displaced civilians. “It’s because of [the military] that we fled our homes ten years ago and haven’t been able to return. The military has killed and raped our people,” she said.

Analysis
‘We’re back to square one’: How Myanmar’s coup undid a decade’s worth of progress to democracy
Subscriber content
February 12, 2021 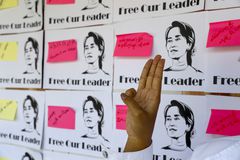 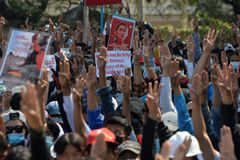 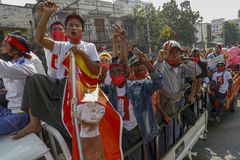