Eric Milgram doesn’t exactly have the typical résumé for a gun-control activist.

Like millions of Americans, he grew up around firearms. He received his first shotgun at the age of 13. As a young man, he owned eight guns and was a member of the National Rifle Association. After moving to Newtown, Conn., in 2010, he set up a target behind his house and tried to teach his children to shoot. He was even contemplating buying an AR-15 semi-automatic rifle.

“Here I was unwittingly indoctrinating the next generation of gun owners,” said Mr. Milgram, a chemist by training who spent the past week tirelessly working to get busloads of protesters to this weekend’s March for Our Lives in Washington. “We treat guns too casually in this country.”

Mr. Milgram’s journey gives him a unique perspective on the United States’ gun culture: As someone who was steeped in that culture for many years, he knows how difficult it will be to change. But he also remains convinced that such a change is coming.

For Mr. Milgram, 48, his attitudes began to shift as the NRA grew more extreme and mass shootings continued. In the mid-1990s, he let his membership with the gun group expire after he became fed up with publications arriving in his mailbox telling him the government was coming for his guns and he was not safe unless he carried a weapon.

But it was not until the horror struck his town and his daughter’s school in 2012 that Mr. Milgram renounced guns entirely. His daughter Lauren, now 12, was in a first-grade classroom at Sandy Hook Elementary School when a gunman killed 26 people, most of them children. Her teacher hid her students in a bathroom. After the massacre, “I made the decision that I will no longer own a gun or fire a single bullet until this immoral industry in our country changes,” he said.

Mr. Milgram got rid of his three remaining weapons, two break barrel air rifles and a pink Daisy-brand BB gun he bought hoping to spark his daughter’s interest in his hobby. Now, he serves as a spokesman for the Newtown Action Alliance, a local group pushing for stronger gun laws. He keeps meaning to dismantle the decaying target and backstop out beyond his house.

“I still get the urge to get out and shoot,” he said. “But I won’t do it until I see a culture change in this country.”

‘No more silence’: Around the world, hundreds of thousands march for gun control
March 24, 2018 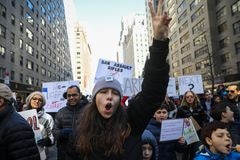