Church leaders in Tigray are pleading for help. “Monasteries and holy shrines have been destroyed,” they wrote in a desperate letter to the Patriarch of the Ethiopian Orthodox Church. “Churches everywhere are burning. … The blood of priests and deacons continues to spill.”

The letter last month, by the church group St. Yared Orthodox Tewahedo Association in the Tigrayan capital of Mekelle, described how the region’s monks and nuns are fleeing from a “rain of bullets.” The church leaders have been begging security forces to halt the “continued looting of our artifacts and our churches,” it said.

Reports such as these, filtering sporadically out of the war-ravaged region in northern Ethiopia, are among the few sources of information on the devastating conflict that has killed thousands of people. Much of Tigray is still off limits to humanitarian agencies and journalists today, more than six months after the eruption of war.

But as the reports trickle in, they hint at an enormous toll – encompassing not just human atrocities, but also the irreplaceable loss of unique cultural treasures from centuries of history.

The massacres of hundreds of civilians and the destruction of refugee camps and hospitals have already been well documented in reports by human-rights groups and humanitarian agencies. Now, the world’s scholars are trying to count the incalculable losses to Tigray’s historic culture, home to some of the world’s oldest Christian manuscripts, religious relics and historic Islamic sites.

In group e-mails, academics such as University of Toronto historian Michael Gervers have been circulating photos of heavily damaged churches and mosques. Some are trying to build a database to list the losses. The information is still fragmentary – but it is enough to deeply alarm the scholars.

“I stand in total disbelief,” said Prof. Gervers, who has spent 40 years studying Tigray’s culture and photographing 70,000 pages of its historic manuscripts. “I’m absolutely shocked. It’s distressing. They’re trying to do away with Tigray.”

He calls it a “cultural cleansing” – an attempt to obliterate the entire Tigrayan culture. Among the treasures at risk are some of the world’s oldest surviving Christian scripture, dating back to the fifth century.

Scholars have been raising concerns about the threat to Tigrayan history for months. “It is beyond any doubt that the conflict is causing heavy damage to the cultural heritage,” said one petition, signed by more than 90 scholars.

World leaders, too, are increasingly worried. In a statement at their meeting in London last week, foreign ministers from Canada and other G7 countries condemned the massacres and rapes of civilians in Tigray and the “destruction and looting of religious and cultural heritage sites.”

heritage is now at risk

heritage is now at risk 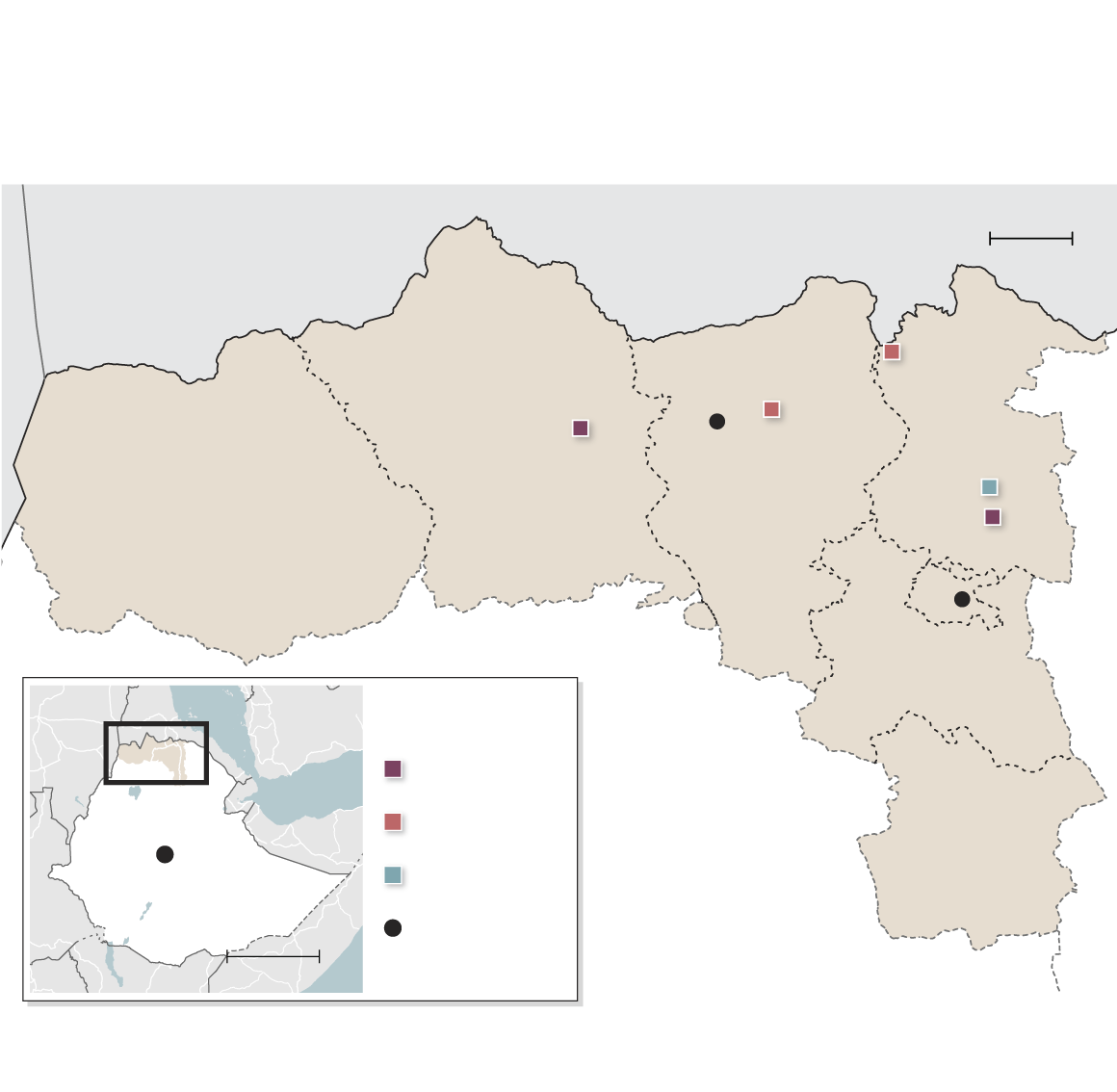 THE GLOBE AND MAIL, SOURCE: UNITED NATIONS OFFICE FOR THE CO-ORDINATION

A group of church deacons in Tigray has compiled a list of the damaged religious sites and the slain priests and monks. The list, obtained by The Globe and Mail, includes 14 churches and four monasteries damaged by shelling and looting by Ethiopian and Eritrean troops since the war began last November.

The holy sites, often many centuries old, are renowned for their impressive architecture, painted ceilings and walls, and stunning murals with depictions of Ethiopian history. They have attracted pilgrims for centuries, and in recent years have helped draw tourists from around the world, creating a nascent tourism industry in Tigray. But now, the sites are in jeopardy.

In the Tigray town of Wukro, Ethiopian troops shelled the St. George church compound on Nov. 25, inflicting severe damage to the church’s façade and several smaller buildings in the compound during a takeover of the town by Ethiopian and Eritrean forces, witnesses said.

The church is cited on the list of 14 damaged churches provided to The Globe.

The church and other buildings in the compound were hit with heavy weaponry, according to a Wukro resident who was granted anonymity by The Globe because he could face threats to his life if he is identified.

Four smaller buildings in the church compound were destroyed by the shelling, and a number of people huddled in the area died immediately, he said.

In the town of Shire, the Abuna Aregawi church was damaged by shelling on Nov. 17, according to Human Rights Watch, citing evidence from witnesses and satellite images. In the historic Christian pilgrimage town of Axum in late November, Eritrean soldiers fired gunshots repeatedly at St. Michael’s Church to destroy it, according to a report by the Ethiopian Human Rights Commission.

And one of Tigray’s most revered monasteries, Debre Damo, was reportedly shelled and looted by Eritrean soldiers earlier this year. The famed sixth-century monastery, which can only be reached by scaling a 15-metre-high cliff with the aid of ropes, was hit by Eritrean artillery in January, and then looted in February, according to several media reports.

But it is not just Christian sites that are suffering. One of Africa’s oldest and most important mosques, al-Nejashi mosque, in the village of Negash near Wukro, was hit by artillery shells that smashed through its historic dome and minaret in late November, as Ethiopian and Eritrean soldiers seized control of the village. The Eritrean soldiers also reportedly damaged historic tombs and looted the mosque compound, stealing ancient manuscripts, relics, rugs and other items.

“Nothing has been done to hold anyone accountable,” said Kedir Kiyar, spokesman for the International Association of Muslims in Tigray.

The mosque, whose history can be traced back to the seventh century, is believed to be founded by early followers of the Prophet Mohammed, who fled persecution in Mecca and found shelter in what was then the kingdom of Axum.

Mr. Kiyar said his association has since learned of an attack on another historic mosque, near the town of Nebelet, in December. “Eritrean soldiers entered the mosque, shot dead a pair of brothers who were guardians of the mosque, and then looted it of its valuables before hitting it with heavy weaponry and damaging it significantly,” he told The Globe.

Wolbert Smidt, an Ethiopian specialist at Jena University in Germany and an adjunct professor at Mekelle University, says the soldiers claimed without evidence that rebel fighters were hiding in the religious sites, despite evidence that it was civilians who were taking refuge in churches or mosques.

Because military commanders seem to be deliberately attacking holy sites, local people feel that “their culture and religion itself is targeted – and this means they feel targeted in their identity,” Prof. Smidt told The Globe.

He recalls a call from a close friend in a remote area of Tigray, telling him that their monastery was under bombardment. “Please tell the world!” he told the professor. “Why are we left alone?”

Billene Seyoum, a spokesperson for Ethiopian Prime Minister Abiy Ahmed, did not respond to messages from The Globe seeking comment on the cultural and religious destruction.

The head of Ethiopia’s Orthodox Tewahedo Church, Patriarch Abune Mathias, has seemed to be equally reticent, saying nothing in public for months. He replied to the church leaders in Mekelle last month with only a carefully worded letter.

But in a video released this weekend, shot on a mobile phone and smuggled out of Ethiopia by a friend, the Patriarch explained his silence: He said he was being “stifled and censored” by the authorities and the state media.

In his 14-minute video, the Patriarch said the war in Tigray is a “genocide” against the people. He listed the “barbarisms” and “carnage” of the war: massacres and rapes, forced starvation, and the looting and shelling of holy sites from Axum to Debre Damo.

“They shoot at churches, they shoot at monasteries,” said Abune Mathias, himself a Tigrayan.

“They have killed all those who tried to prevent the looting of Axum. The bombardment at Debre Damo is very shocking. They are working day and night to destroy Tigray.”