After spending several anxious days in prison, Natasha Narwal, a student activist accused of rioting by New Delhi police, thought her ordeal was nearing an end.

A judge ruled that Narwal had been exercising her democratic rights when she participated in protests earlier this year against a divisive citizenship law that incited unrest across India.

But shortly after the judge approved Narwal’s release in late May, police announced fresh charges: murder, terrorism and organizing protests that instigated deadly religious violence in India’s capital. Narwal, 32, who has said that she is innocent, was returned to her cell.

“I felt like crying,” said her roommate, Vikramaditya Sahai. “We are grieving the country we grew up in.”

As India struggles to quell surging coronavirus infections, lawyers accuse authorities of rounding up government critics and keeping them in detention in the middle of a pandemic. It is part of a strategy, they say, to stifle activists who are protesting what they see as iron-fisted and anti-minority policies under Prime Minister Narendra Modi.

In recent weeks, Narwal and nearly a dozen other prominent activists — along with potentially dozens of other demonstrators, though police records are unclear — have been detained. They are being held under stringent sedition and anti-terrorism laws that have been used to criminalize everything from leading rallies to posting political messages on social media.

India’s coronavirus restrictions, some of which are still in effect, have blocked pathways to justice, lawyers and rights activists said. With courts closed for weeks, lawyers have struggled to file bail applications, and meeting privately with prisoners has been nearly impossible.

Law enforcement officials in New Delhi, who are under the direct control of India’s home ministry, have denied any impropriety. But rights groups said the arrests have been arbitrary, based on scant evidence and in line with a broader deterioration of free speech in India.

In a lengthy report released this month, the Delhi Minorities Commission, a government body, accused police and politicians from Modi’s party of inciting brutal attacks on protesters and supporting a “pogrom” against minority Muslims.

Meenakshi Ganguly, the South Asia director of Human Rights Watch, said cases against activists appeared to be “politically motivated” and that police had devised a formula for keeping people like Narwal in jail: When a judge orders the release of a prisoner for lack of evidence, new charges are introduced.

“The urgency to arrest rights activists and an obvious reluctance to act against violent actions of the government’s supporters show a complete breakdown in the rule of law,” she said.

Before the pandemic hit, Modi was in the throes of the most significant challenge to his power since becoming prime minister in 2014. After Parliament passed a law last year that made it easier for non-Muslim migrants to become Indian citizens, millions protested across the country.

To critics, the citizenship law was more evidence that Modi’s Hindu nationalist government planned to strip the country’s Muslims of their rights.

Tensions peaked in February when sectarian violence and rioting broke out in New Delhi. The vast majority of people killed, hurt or displaced were Muslim, and police were involved in many of those cases.

After Modi announced a nationwide lockdown in late March to contain the coronavirus, shutting down businesses and ordering all 1.3 billion Indians inside, the protests disbanded. Lawyers said police then moved to detain demonstrators while skirting complaints against government allies.

Among those in custody are a youth activist who raised awareness about police brutality against Muslims; an academic who gave a speech opposing the citizenship law; and Narwal, a graduate student who co-founded Pinjra Tod, or Break the Cage, a women’s collective that organized some of the largest rallies.

Nitika Khaitan, a criminal lawyer, said the crackdown had also pushed beyond higher-profile critics to include ordinary residents of riot-hit neighborhoods. She recently challenged those arrests in a jointly signed letter to the Delhi High Court.

Lawyers have tracked a few dozen such arrests under the lockdown, though Khaitan said the true figure could not be verified because police reports had not been made public. Many detentions were “not in compliance with constitutional mandates,” she said.

In a recent interview, Sachidanand Shrivastava, the police chief in New Delhi, said his officers were conducting fair investigations.

In May, authorities said they had detained about 1,300 people for involvement in the protests and riots, including an equal number of Hindus and Muslims. Recently, police arrested a group of Hindus for forcing nine Muslim men to chant “Hail Lord Ram,” a reference to a Hindu god, before killing them and throwing their bodies into a drain.

“It is very important that the police force remain impartial,” Shrivastava said. “And we are following this principle from Day 1.”

But members of India’s judiciary have questioned the official numbers, accusing police of withholding information about the arrests under national security protections and singling out Muslims for many of the harsher charges.

In court proceeding notes reviewed by The New York Times, a judge hearing a case against a Muslim protester wrote that police appeared to be targeting only “one end” without probing the “rival faction.” During the riots, police were accused of abetting Hindus and, in some cases, torturing Muslims.

Khalid Saifi, a member of United Against Hate, a group that works with victims of hate crimes, was arrested after he tried to mediate between police and protesters, according to his lawyers.

Police charged him with being a “key conspirator” of the riots. His wife, Nargis Saifi, said he was tortured in custody.

“His only crime is he is a Muslim,” she said.

M.S. Randhawa, a police spokesperson, denied that Khalid Saifi had been tortured, adding that he has regular opportunities to speak to a judge if abuse occurs.

“These are just allegations,” Randhawa said. “He would have told the magistrate if he had been tortured.”

But rights advocates accuse Modi’s government of shielding party officials — and more broadly, of Hindus involved in the violence.

Narwal, who was detained in May, could face at least several years in prison for helping organize demonstrations that blocked a busy road in northeast Delhi, where February’s bloodiest battles between Hindus and Muslims broke out.

Police have accused her of playing a leading role in the riots, charging her with murder, attempt to murder and being part of a “criminal conspiracy.”

At the same time, police have been accused of ignoring complaints against Kapil Mishra, a local politician with Modi’s Bharatiya Janata Party who gave a fiery speech threatening to remove Narwal and other protesters forcibly if authorities did not take action.

Hours after the ultimatum, the streets erupted. But charges were never filed against Mishra, who has denied a role in starting the riots.

A New Delhi police superintendent, who spoke on the condition of anonymity, said some officers had wanted to act against Mishra, but they were pressured by the force’s leadership not to touch “the warriors of the government.”

“We did not even try,” the superintendent said. “The directions were clear: Don’t lay your hands on him.”

Narwal’s father, Mahavir Narwal, said the government was moving India closer to authoritarianism and demonizing anybody who questioned its policies.

For weeks, prison officials ignored his calls and emails to Tihar Jail, where Narwal is being held. With coronavirus restrictions in place, she was moved into an isolation ward at one point, where she stayed for 17 days, said her father, a retired scientist.

Lately, communication has smoothed out. But he said the subtext of his daughter’s arrest seemed clear: “If you protest, you will be called a terrorist.

“All she did was fight to keep the soul of India alive,” he said. 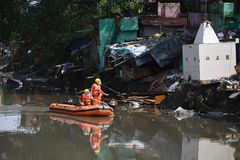 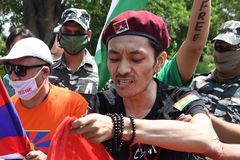 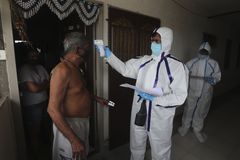