Indian Prime Minister Narendra Modi and his party this week face their first electoral test since deadly anti-government protests erupted nearly two months ago, with the divisive turmoil likely to win them votes at polls in the capital.

Modi’s Hindu-nationalist Bharatiya Janata Party (BJP) won a bigger majority in a general election in May, but it has lost a string of state elections since then.

The protests, in which at least 25 people have been killed, erupted across the country in mid-December, after the BJP passed a new citizenship law critics say violates India’s secular constitution and discriminates against minority Muslims.

New Delhi is due to hold its elections on Saturday with tension high after three incidents of gunfire at or near protest sites in four days. In two of the shootings, people shouted Hindu-nationalist slogans.

Protest organizers have stepped up security as a result, and blame the BJP for inflaming the tension. The party denies doing so.

Without a well-known leader in the capital, analysts say the BJP has intensified a policy of campaigning on Modi’s personal appeal, rather than on development issues.

At the same time, the protests have highlighted the communal fault line, which could help his party secure the Hindu vote in the capital and elsewhere, analysts say.

“Rightly or wrongly, they are largely seen as Muslim protesters. There is a polarization between Hindus and Muslims that suits the BJP,” said Harsh Pant, a fellow at New Delhi-based think-tank the Observer Research Foundation.

The BJP’s main challenger on Saturday will be the liberal Aam Aadmi Party, led by the city’s chief minister, Arvind Kejriwal.

It has focused on its work over the past five years, such as fixing state-run schools and health care in the city of more than 16 million people.

The BJP, however, has highlighted the work of Modi’s federal government since its re-election last May, in particular changes that have appealed to the party’s Hindu base such as reforms in the disputed Kashmir region and a court ruling, backed by the government, clearing the way for the construction of a Hindu temple on a long-disputed site in northern India.

“What they seem to be doing is fighting state elections on Modi’s popularity,” Pant said.

Other issues, such as Delhi’s woeful air pollution, have not figured prominently in the election although all main contenders promise to tackle it.

In Shaheen Bagh, a working-class, majority-Muslim area of southeast Delhi, protesters have blocked a major road for months, demanding the repeal of the citizenship law.

In neighbourhood meetings, election rallies and road shows snaking through narrow streets, BJP workers and leaders have focused on the site, attempting to discredit the protesters and sometimes going as far as to accuse them of being aligned with Muslim-majority archrival Pakistan.

Polling data for Delhi shows the BJP narrowing the gap with - but still trailing - the Aam Aadmi Party over the past week.

BJP leaders have called Kejriwal a “terrorist”, and accused protesters of being rapists.

“Pakistan will be pleased if you vote for Kejriwal,” a leader of the BJP’s women’s wing, Sukhpreet Kaur, told an election gathering of about 100 women in the working-class Delhi neighbourhood of Mayapuri on Tuesday.

Yogi Adityanath, a firebrand Hindu monk and BJP chief minister of India’s most populous state, Uttar Pradesh, which flanks Delhi in the east, mentioned Pakistan eight times in 48 seconds in a speech in Delhi this week.

BJP worker Indushekhar Mishra said the tide was turning in his party’s favour with the help of the protests.

“The main issue is the Shaheen Bagh problem,” he told Reuters, ahead of a road show in central Delhi by India’s Home Minister Amit Shah on Wednesday.

“People have understood that the other party supports one community.”

Shaheen Bagh has been tense since a Hindu gunman shot and wounded a protester at a nearby university on Jan 30.

Its narrow lanes have been cordoned off and anyone entering is carefully searched.

“The BJP has poisoned the atmosphere,” Afsal Ahmed Khan, one of the protest organizers, told Reuters.

“They’re trying to win the election without addressing any issues, by making it about Hindus and Muslims. But people will not go back to their homes until the government removes these discriminatory laws.” 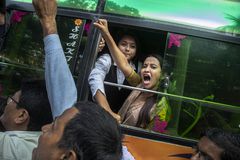