In a moment of triumph that India’s Hindu nationalists had worked toward for years, Prime Minister Narendra Modi on Wednesday set the ceremonial cornerstone for a new Hindu temple at the site of a destroyed mosque in Ayodhya.

Hindus and Muslims have clashed over the Ayodhya site for decades, setting off waves of sectarian violence that has killed thousands. As Modi sat cross-legged and chanted mantras in front of a Hindu priest Wednesday, part of the elaborate groundbreaking ceremony for the temple, it was the fulfilment of a promise to his Hindu political base and an unmistakable milestone in his efforts to shift India’s secular foundations toward a more overtly Hindu identity.

Millions of Indians watched the ceremony on television or on social media. But because of the coronavirus pandemic, the gathering in Ayodhya itself was more muted than originally planned, with the crowds kept away. Hindu priests chose Wednesday, and specifically at 12:44 p.m., as the most auspicious time to begin building the new temple.

With the cameras rolling, Modi took centre stage. He performed Hindu rituals, such as offering holy water and putting a red mark on his forehead, alongside some of India’s most avowed Hindu nationalists. They included Yogi Adityanath, the firebrand Hindu monk turned chief minister of Uttar Pradesh state, and Mohan Bhagwat, the leader of the RSS, a Hindu supremacist group, whose members helped tear down the mosque that used to stand in Ayodhya.

“The wait of centuries is coming to an end,” Modi proclaimed.

Modi’s triumphal moment collides with a tough reality. India has been walloped by the coronavirus, racking up more infections than any other nation besides the United States and Brazil. The virus is cutting through India’s political class, including some people close to Modi.

In the past few days, Dharmendra Pradhan, the oil minister, and Amit Shah, the home minister who is widely considered India’s second-most-powerful person after Modi, came down with the coronavirus and have been hospitalized. Several other top politicians have fallen sick.

And the economy has fallen into a deep well. Economists have predicted that more than 100 million Indians lost their jobs or are in serious danger of losing them. As factories shut down and people retreated to their homes under coronavirus lockdown rules, some of which still stand, tens of millions of labourers poured out of the cities, making harrowing journeys back into the countryside, where they hoped to rely on their rural families to survive.

Some economists have predicted that India’s once booming economy could contract by nearly 10 per cent, tipping millions back into poverty.

In that environment, for many Indian Hindus, Modi’s Ayodhya ceremony was a captivating distraction. It symbolized Modi’s “total domination over India,” said Arati Jerath, a political commentator.

The intent, Jerath said, is for Modi to show that he and his party are “building a Hindu nation and that India is a Hindu-majority country, not the Nehruvian secular India that we have known for the last 70 years.”

All week, government officials have been prepping the site. The fire brigade has been hosing down Ayodhya’s streets with sanitizer. Saffron flags – it is the holy colour for Hinduism – fluttered from nearby rooftops, and houses around the temple site had been hastily splashed with a coat of fresh paint. Security officers chalked out the precise spot for Modi to fly in by military helicopter.

Aug. 5 coincides with the anniversary of Modi’s move on Kashmir, another political gift to Hindu nationalists. On Aug. 5, 2019, Modi’s government suddenly announced that it was eradicating the statehood of Jammu and Kashmir, India’s only Muslim majority state, bifurcating the territory and turning it into a federal enclave.Kashmiris saw this as a betrayal of decades of policy that allowed Kashmir a certain degree of autonomy, and thousands of Kashmiris were rounded up and arrested. Some Kashmiri leaders still remain in detention.

A few months later, Modi’s government passed a citizenship law that blatantly discriminated against Muslims. That law proved incredibly divisive, setting off nationwide protests that formed the biggest challenge yet to Modi’s agenda and put him on the defensive for the first time.

Modi’s participation in Ayodhya is seen in this light, as another decisive step toward an India that officially favours its Hindu majority – about 80 per cent of the country is Hindu, 14 per cent Muslim.

“The last 15 months have seen a more systematic and ruthless action toward rewriting the constitution and ushering in a new grammar of state power,” Suhas Palshikar wrote in a column this week in The Indian Express, one of India’s leading progressive newspapers. “The new republic is founded on a militant culture of majoritarianism.”

In November, India’s Supreme Court green-lighted the construction of a Hindu temple on the site where the mosque had stood before Hindu devotees destroyed it in 1992 with sledgehammers and their bare hands. Modi’s party has cast its quest to build a temple as a key step in establishing India as overtly Hindu, wiping away centuries of oppression at the hands of the Muslim Mughal Empire and British colonialists.

Many independent analysts saw the Supreme Court’s decision as a capitulation to the majoritarian politics of Modi and his Bharatiya Janata Party.

Many Hindus believe that the disputed site was the birthplace of their revered god Ram and that an earlier temple for Ram was demolished during Mughal rule to build the mosque. The case had been tossing and turning in Indian courts since the 1950s.

After Hindu supremacists destroyed the Babri Mosque in 1992, it set off riots across the country that killed around 2,000 people. The Ayodhya shock waves continued for years; the widespread religious massacres in Gujarat in 2002 were connected to Ayodhya as well.

In place of the mosque, Hindus erected a tent resembling a temple, and before the coronavirus hit, countless tourists visited it. When the case reached the Supreme Court in 2010, the deity Ram was given legal standing, awkwardly pitting the god Hindus revere most against the Muslim parties in the suit.

The mosque that had stood on the site was built in the 1500s during Mughal rule, a period that many right-wing Hindus feel bitterly about, seeing it as subjugation under Muslim occupation. Although monuments like the Taj Mahal – also built under the Mughals – are some of India’s most celebrated sites, Hindu hard-liners see them as testaments of past oppression.

The plan is to build a expansive stone temple in Ayodhya on a raised platform with multiple turrets, pillars and domes and many intricate carvings. Although no shovels or bulldozers were visible at Wednesday’s groundbreaking ceremony, construction crews have already begun to clear the land. 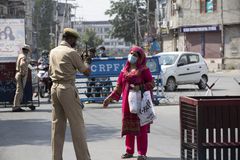 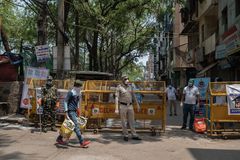 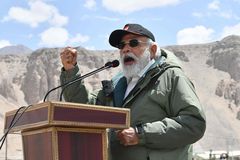