Iran and global powers resumed talks on Thursday to rescue the 2015 nuclear deal in an effort potentially complicated by Tehran’s decision to ramp up uranium enrichment and what it called Israeli sabotage at a nuclear site.

Casting a shadow over the Vienna talks, Tehran on Tuesday announced its decision to enrich uranium at 60 per cent purity, a big step closer to the 90 per cent that is weapons-grade material, in response to an explosion at its key Natanz facility on Sunday.

Calling the move “provocative,” the United States and the European parties to the deal warned that Tehran’s enrichment move was contrary to efforts to revive the accord abandoned by Washington three years ago.

The 2015 agreement sought to make it harder for Iran to develop an atomic bomb in return for lifting sanctions.

Iran nuclear deal talks: What you should know

Tehran’s refusal to hold direct talks with the United States forced European intermediaries to shuttle between separate hotels in Vienna last week when Iran and the other signatories - Britain, China, France, Germany and Russia - held what they described as a first round of “constructive” negotiations.

Senior diplomats, excluding the United States, initially met to set the tone on Thursday in what diplomats anticipated would be a tougher round of talks to salvage the pact.

Two expert-level groups, seeking to marry lists of sanctions that the United States could lift with nuclear obligations Iran should meet, have now resumed their discussions.

“So currently we should do away with all disruptive factors, moving forward as swiftly as we can on the work of negotiation, especially by zeroing in on sanctions-lifting.”

Iran’s foreign ministry said its negotiators had defended their decisions and expressed their disappointment at “the weak reaction” from European powers to the attack on Natanz.

Highlighting Western concerns, a senior diplomat said that while the desire was to make progress, Iran’s latest violation could not be ignored and made efforts to achieve a breakthrough before the June 18 Iranian presidential election harder.

“The seriousness of Iran’s latest decisions has hurt this process and raised tensions,” said the senior Western diplomat.

“We will have to see how in the coming days we address these violations with the will to press ahead in the talks.”

Tehran has repeatedly said that all sanctions must be rescinded first, warning that it may stop negotiations if the measures are not lifted. Washington wants Iran to reverse the breaches of the deal that it made in retaliation for tough sanctions imposed by former U.S. President Donald Trump.

“Iran’s “seriousness of purpose” in pursuing diplomacy was tested in the three years since Trump withdrew from the nuclear accord,” Iranian Foreign Minister Mohammad Javad Zarif said on Twitter. “Iran - by remaining in the deal - passed with flying colors. The Biden administration, however, has only shown a commitment to Trump’s maximum pressure.”

Enrique Mora, EU chief coordinator for the talks, said in a tweet it was good to see participants resume the talks “despite very challenging events and announcements over the past days.”

Israel, which Tehran refuses to recognize, opposes the deal, an accord that Iran and U.S. President Joe Biden are trying to revive after Trump quit it in 2018 and reinstated sanctions. Israel has not formally commented on Sunday’s Natanz incident.

The United Arab Emirates, which also supported the decision to quit the 2015 accord and reimpose sanctions on Tehran, urged Washington to push for a better accord and a Gulf diplomatic source said the Riyadh-based Gulf Cooperation Council had sent letters to global powers stressing the need for Gulf involvement in ongoing negotiations.

Iran nuclear deal talks: What you should know
April 15, 2021 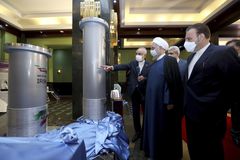 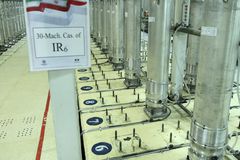