President Hassan Rouhani said on Thursday that Iran was ready for the worst in an uphill struggle to salvage its nuclear deal with world powers abandoned by the United States, but that he was sure Tehran would eventually prevail.

Fears of a Middle East war with global repercussions have risen since U.S. President Donald Trump withdrew last year from the 2015 deal and revived a panoply of sanctions meant to push Tehran into wider security concessions.

Iran has retaliated by breaching the deal, resuming uranium enrichment seen in the West as a potential conduit to developing an atom bomb, but faces severe economic damage under intensified U.S. sanctions designed to strangle its vital oil trade.

“We have a hard battle ahead, but we shall surely win,” Rouhani said on live state television.

“We are not acting on the assumption we will get results through talks and accords,” Rouhani said, alluding to European powers trying to salvage the deal that reined in Iran’s disputed nuclear advances but unable to protect from U.S. sanctions the trade benefits that Tehran was promised in return.

“Instead we are planning based on the assumption that we will not achieve results. Our budget for this year and next, our ministries are also acting on this basis ... We are acting and going step-by-step with long-term prudence.”

The downbeat remarks by Rouhani, architect of the landmark 2015 accord and a strong proponent of negotiations, hinted he was losing hope of avoiding a final collapse of the deal, though he left the door open to further contacts with Europe.

After several attacks in May and June on oil tankers - blamed by Washington on Tehran, which denied responsibility - Trump has been trying to forge a military coalition to secure Gulf waters, though European allies have been loath to join for fear of provoking open conflict.

Britain, France and Germany have instead appealed for diplomatic moves to defuse the crisis.

France voiced concern over the U.S. move and said that along with Britain and Germany it disagreed with the decision, the French Foreign Ministry said.

“We consider that all diplomatic channels should stay open, particularly in a context of high tensions,” the ministry said.

Iran’s Rouhani described the sanctions on Zarif as “childish behaviour.”

A pivotal player in the nuclear deal who was educated and lived for years in the United States, Zarif said the U.S. action would not affect him as he had no property or other interests in America.

U.S. Treasury Secretary Steven Mnuchin said Zarif “implements the reckless agenda of Iran’s Supreme Leader ... (We are) sending a clear message to the Iranian regime that its recent behaviour is completely unacceptable”.

In repudiating the nuclear deal reached by his predecessor Barack Obama, Trump said he wanted to secure a more far-reaching accord that would not only put stricter limits on Iran’s nuclear activity but also curb its ballistic missile programme and end its support for armed proxies in Syria, Iraq, Yemen and Lebanon.

Iran has long said its nuclear work is solely for civilian energy and its missiles only for defence and deterrence.

As U.S.-Iranian tensions have spiralled, the security of shipping in the Gulf, through which about a fifth of the world’s oil passes, has shot up the international agenda.

Washington has accused Iran of being behind explosions that holed six oil tankers in May and June.

In July, Iran seized a British-flagged tanker in the Strait of Hormuz, the Gulf’s outlet to the open seas, in apparent retaliation for Britain’s seizure of an Iranian ship accused of violating European sanctions by taking oil to Syria.

Britain on Thursday ruled out a swap of the two tankers. “We are not going to barter: if people or nations have detained UK-flagged illegally then the rule of law and rule of international law must be upheld,” Foreign Secretary Dominic Raab said.

In a sign of increasing jitters over security in the Gulf, Royal Dutch Shell said on Thursday it was not taking any British-flagged tankers through the Strait of Hormuz for the time being.

The U.S. Embassy in Berlin said on Tuesday the United States had asked Germany to join France and Britain in a mission to protect shipping through the strait and “combat Iranian aggression”. Germany rejected the request. 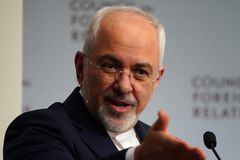 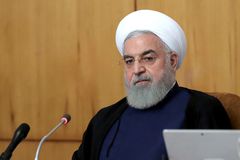 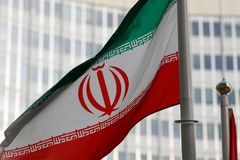