Iran has agreed to allow inspectors in to two sites where the country is suspected of having stored or used undeclared nuclear material, the UN atomic watchdog agency said Wednesday.

The International Atomic Energy Agency said Iran was “voluntarily providing the IAEA with access to the two locations specified by the IAEA and facilitating the IAEA verification activities to resolve the issues.”

It said in a joint statement with Iran that the dates for the inspections had been agreed, but did not say when they would take place.

The inspections would resolve a months-long impasse between Iran and the IAEA, and the announcement came as the agency’s Director General Rafael Grossi was on his way home to Vienna after his first visit to Tehran since taking over the post in December.

Iran had been resisting providing access to the sites, which are thought to be from the early 2000s, before it signed the 2015 nuclear deal with world powers, maintaining the IAEA had no legal basis to visit them.

The head of Iran’s nuclear agency, Ali Akbar Salehi, confirmed that Iran had agreed to the inspections, saying “this will bring the case to an end.”

“We are loyal to conventions and our commitments,” he said, adding that he hoped the agreement would open a new chapter between Iran and the IAEA based upon “good intentions and mutual acceptance.”

Iranian President Hassan Rouhani, who on Wednesday met with the IAEA chief, said Grossi’s visit had produced a “good agreement that can help for moving on a correct and proper path and achieve the final resolution of problems.”

As the U.S. and others continue to put more pressure on Iran, Rouhani urged the IAEA to continue its “independence, impartiality and professionalism.”

Grossi told IAEA board members in March that it had “identified a number of questions related to possible undeclared nuclear material and nuclear-related activities at three locations that have not been declared by Iran” and had been pressing for access.

In its report in June, the agency said it had determined that one site had undergone “extensive sanitization and levelling” in 2003 and 2004 and there would be no verification value in inspecting it. It said Iran has blocked access to the other two locations, one of which was partially demolished in 2004 and the other at which the agency observed activities “consistent with efforts to sanitize” the facility from July 2019 onward.

At the same time, it emphasized that Iran had been fully providing access to sites agreed upon in the 2015 nuclear deal, known as the Joint Comprehensive Plan of Action, with the U.S., Russia, China, Germany, France and Britain.

The nuclear deal promised Iran economic incentives in return for the curbs on its nuclear program. President Donald Trump pulled the U.S. out of the deal unilaterally in 2018, saying it needed to be renegotiated.

Since then, Iran has since slowly violated the restrictions to try and pressure the remaining nations to increase the incentives to offset new, economy-crippling U.S. sanctions.

The ultimate goal of the deal is to prevent Iran from developing a nuclear bomb. Since the U.S. withdrawal, Iran has stockpiled enough uranium to produce a weapon, although the government in Tehran insists it has no such goal and that its atomic program is only for producing energy.

The other members of the accord have been struggling to keep the deal alive saying, among other things, that even though Iran has violated many parts of the deal, the ability for inspectors to continue to visit its nuclear sites is critical. 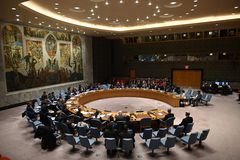 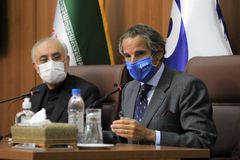