The captain of an Iranian supertanker at the centre of a diplomatic standoff no longer wants to keep command of the ship, which is in need of repairs that could impede its immediate departure from Gibraltar, the sailor’s lawyer said Friday.

The tanker – and its 2.1 million tons of Iranian light crude oil – seemed to perform mild manoeuvres on Friday but largely remained still, shrouded in heavy fog in waters off the British overseas territory a day after authorities ended its detention for allegedly breaching European Union sanctions on Syria.

The release Thursday, as the United States reportedly manoeuvred to re-seize the tanker, came as the head of the Gibraltar government said that Iran had promised him not to deliver the fuel to a sanctioned refinery in Syrian territory, although an Iranian official later disputed that those assurances had been delivered.

Any delay of the vessel’s departure could provide a window of opportunity for the U.S. to mount further legal action and try to again stop the tanker amid growing confrontation with Tehran.

Tensions have escalated since President Donald Trump last year unilaterally pulled the U.S. out of the 2015 nuclear deal signed by Iran and other world powers.

But that prospect remained up in the air on Friday with a lawyer representing three Grace 1 crew members who were released from detention on Thursday casting doubts on the vessel’s immediate departure.

Richard Wilkinson told The Associated Press that the Indian national who commanded the oil tanker until it was detained in early July had asked his Iranian employers to replace him.

“He doesn’t want to stay in command of the ship, he wants to go home, because he wasn’t happy to go back and pick up the broken pieces,” said Wilkinson. “But he’s a professional skipper and needs to wait for a new crew to do a proper handover.”

The lawyer said the tanker had been due for repairs in Gibraltar even before it was seized, which impeded the replacement of certain parts, making the tanker unfit for an immediate long voyage.

Adding to the uncertainty, the next possible destination of the cargo became a point of contention as Iranian and Gibraltar authorities showed disagreement over the terms that led to the ship’s release.

Iranian Foreign Ministry Spokesman Abbas Mousavi on Friday said the country had made no commitments to gain the release of its tanker, while the chief minister of Gibraltar insisted on the written assurances it had received.

The captors of the vessel “raised the issue of commitment in a bid to make up for their humiliation caused by this illegal act and piracy,” Abbas Mousavi said, according to the semi-official Tasnim news agency.

“We announced that Syria was not its destination and we have upheld the same … and reiterated that it was nobody’s business even if it was Syria,” he added.

In response, the Gibraltar government issued a statement saying that “the evidence is clear and the facts speak louder than the self-serving political statements we are hearing today.”

Authorities in the territory at the mouth of the Mediterranean Sea didn’t reveal if the vessel was expected to leave any time soon. Chief Minister Fabian Picardo said it was now strictly a matter of the ship’s agents and owners.

“She is able to leave as soon as she organizes the logistics necessary in order to sail a ship of that size wherever it is going next,” Fabian Picardo told the BBC. “It could be today. It could be tomorrow. This is a matter now exclusively for the ship agents and ship owners.”

Authorities in Gibraltar had said Thursday that the U.S. Department of Justice had requested to seize the ship and its cargo, but Picardo said that such a request should be made directly to the territory’s judiciary and not the government.

No U.S. claim had been lodged by the end of business day on Friday, a spokesman from the Gibraltar Supreme Court told The Associated Press. The official was not authorized to be identified by name in media reports.

Wilkinson, the Grace 1 captain’s lawyer, said it would be challenging for the U.S. to secure the detention under the argument of applying U.S. sanctions on Iranian oil exports.

“They seem to want to enforce American sanctions in British territorial waters. Good luck with that,” Wilkinson said, adding that “the U.S. is pretty late in the day.”

“You need to get a formal application to the court, just writing a letter to the government is not enough,” he said.

Earlier, authorities in the U.S. had announced plans to revoke visas for the country of any crew member on the Iranian oil tanker. Wilkinson said that the measure wouldn’t be problematic for most of the crew, who come from Southeast Asian countries, including India.

In a statement, the State Department accused the Grace 1 of assisting Iran’s Revolutionary Guard Corps in evading U.S. sanctions on oil exports from the country. The Corps is designated a foreign terrorist organization by the U.S. and subject to separate penalties. 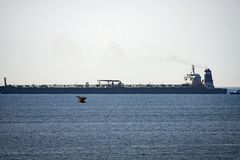