Iran’s foreign minister lashed out at U.S. President Donald Trump on Friday during a critically timed visit to Pakistan amid a simmering crisis between Tehran and Washington and ahead of next week’s emergency Arab League meeting called by Saudi Arabia over the region’s tensions.

The remarks by Mohammad Javad Zarif were the latest in a war of words between him and Mr. Trump. The Iranian diplomat on Friday assailed the President for his tweet earlier this week warning Iran not to threaten the United States again or it would face its “official end.”

“Iran will see the end of Trump, but he will never see the end of Iran,” Mr. Zarif was quoted by Iran’s semi-official Fars new agency as saying during a visit to Islamabad.

Tensions have ratcheted up recently in the Mideast as the White House earlier this month sent an aircraft carrier and B-52 bombers to the region over a still-unexplained threat it perceived from Iran. And on Thursday, the Pentagon outlined proposals to the White House to send military reinforcements to the Middle East to beef up defences against Iran.

Mr. Trump said on Friday the United States will bolster its military presence in the Middle East with an additional 1,500 troops. He said the troops would have a “mostly protective” role.

The administration had notified Congress earlier in the day about the troop plans.

The forces would number “roughly” 1,500 and would deploy in the coming weeks, “with their primary responsibilities and activities being defensive in nature,” according to a copy of the notification obtained by the Associated Press.

Their mission would include protecting U.S. forces already in the region and ensuring freedom of navigation, the notification said.

The purpose of Mr. Zarif’s visit to Pakistan, where he held talks with his Pakistani counterpart Shah Mehmood Qureshi and Prime Minister Imran Khan, was not made public.

But there has been speculation that Iran is looking to Islamabad and its close relationship with the Saudis to help de-escalate the situation. In a statement following meetings with Mr. Zarif, Mr. Khan said “Pakistan was prepared to use its friendly relations in the region to help lower tensions among brotherly countries and promote peace and stability in the region. … War is not a solution to any problem.”

Mr. Zarif has been criticized this week by Iranian Supreme Leader Ayatollah Ali Khamenei, who named him and President Hassan Rouhani as failing to implement the leader’s orders over Iran’s 2015 nuclear deal with world powers. Mr. Khamenei had claimed the deal had “numerous ambiguities and structural weaknesses” that could damage Iran.

The crisis takes root in the steady unravelling of the nuclear deal, intended to keep Iran from obtaining a nuclear weapon. The accord promised economic incentives in exchange for restrictions on Tehran’s nuclear activities.

The Trump administration pulled the United States out of the deal last year, and subsequently reimposed and escalated U.S. sanctions on Tehran – sending Iran’s economy into freefall.

Mr. Khamenei’s criticism of Mr. Zarif signalled a hard-line tilt in how the Islamic Republic could react amid Mr. Trump’s maximalist pressure campaign.

Iran declared earlier this month that the remaining signatories to the deal – Germany, France, Britain, China and Russia – have two months to develop a plan to shield Iran from U.S. sanctions.

On Monday, Iran announced it had quadrupled its production capacity of low-enriched uranium, making it likely that Tehran will soon exceed the stockpile limitations set by the nuclear accord, which would escalate the situation further.

Several incidents have added to the crisis.

On Thursday, Saudi Arabia said Yemen’s Iran-aligned rebels again targeted an airport near its southern border with a bomb-carrying drone. The Saudi military said it intercepted the drone, while the rebel Houthis said it struck a Patriot missile battery at the airport. The Houthis have claimed three times in recent days to have targeted the airport, which is also home to a military base. It comes after the Houthis last week targeted a Saudi oil pipeline in a co-ordinated drone attack.

Pakistan was quick to condemn the attacks and promised Saudi Arabia, a staunch ally, its full support. The kingdom this week announced a US$3.2-billion deferred oil and gas payment package for energy-strapped Islamabad.

With neighbouring Iran, Pakistan walks a fine line and their relationship is sometimes prickly. Islamabad has little leverage with Washington, although relations between the two have improved since Pakistan expressed readiness to help move talks between the Afghan Taliban and Washington forward.

IRNA also reported that Mr. Zarif came to Pakistan with a proposal to link Iran’s port of Chabahar on the Arabian Sea with Pakistan’s Gwadar port, mostly being developed by China as part of the multibillion-dollar One Road project that will connect the Arabian Sea with China.

The proposal is unexpected because Pakistan’s rival India has been Iran’s partner in developing Chabahar while Iran’s key regional rival, Saudi Arabia, has been in talks to develop an oil refinery facility at Pakistan’s Gwadar, though no agreements have been signed.

Meanwhile, Oman’s Foreign Ministry said it was working to “ease the tensions” between Iran and the United States.

The ministry in a series of tweets on Friday morning attributed the comments to Yusuf bin Alawi, the sultanate’s minister of state for foreign affairs, and cited an interview in Asharq al-Wasat, the London-based newspaper owned by a Saudi media group long associated with the al-Saud royal family.

In the interview, bin Alawi warns war “could harm the entire world if it breaks out.” He doesn’t confirm any current Omani mediation but says both Washington and Tehran realize the gravity of the situation.

Oman, a country on the eastern edge of the Arabian Peninsula, has long been an interlocutor of the West with Iran. The U.S. held secret talks in Oman with the Iranians that gave birth to the 2015 nuclear deal with world powers. 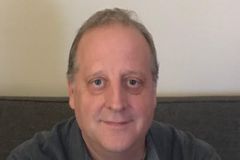 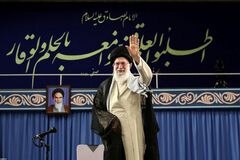 Senior German diplomat in Iran for nuclear deal talks
May 23, 2019 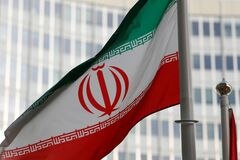