President Michel Aoun said on Monday that Lebanon had a right to defend itself, likening Israeli drone strikes to a “declaration of war” amid rising tensions between Hezbollah and Israel.

Israel’s military said its northern command was on high alert at the borders with Syria and Lebanon and Lebanese Prime Minister Saad Hariri urged diplomats to help prevent a “dangerous escalation.”

After two drones crashed on Sunday in Beirut’s southern suburbs, which are dominated by Hezbollah, the Iran-backed movement warned Israel to await a response.

In a speech on Sunday, the leader of the heavily armed Hezbollah, Sayyed Hassan Nasrallah, issued the toughest threats to his enemy in years and said the drones had launched a “new phase.”

While Israel has not claimed responsibility for the Beirut drone attack, Mr. Nasrallah deemed it the first Israeli attack inside Lebanon since the two sides fought a month-long war in 2006.

Only hours later, a Palestinian faction said Israeli drones had struck a military position it holds in Lebanon’s Bekaa valley before dawn on Monday.

“What happened was similar to a declaration of war which allows us to resort to our right to defending our sovereignty,” the Lebanese president’s office quoted Mr. Aoun, a political ally of Hezbollah, as saying on Twitter on Monday.

“We are a people seeking peace, not war, and we don’t accept anyone threatening us in any war.”

Mr. Aoun discussed the “Israeli assault” with the United Nations Special Coordinator for Lebanon, Jan Kubis, on Monday, the presidency said. He told Mr. Kubis the attacks in the Dahyeh suburbs and in the Bekaa violated UN Security Council Resolution 1701 that ended the July 2006 war.

The Western-backed Mr. Hariri, whose coalition cabinet includes Hezbollah, told the diplomats their countries must help to preserve stability in Lebanon. “Any escalation could develop into a regional cycle of violence that nobody can predict the extent of,” he said.

Hezbollah said on Monday the two “rigged drones” were sent to cause blasts in Beirut’s suburbs, with the first failing and the other exploding. Its statement said experts had taken apart the first drone and found it was carrying a bomb that weighed 5.5 kg (12 lb).

Israeli Energy Minister Yuval Steinitz said his country remained vigilant about the possibility of a Hezbollah attack under orders from its regional arch-foe Iran.

“Undoubtedly, the situation is tense. One does not know what a new day will bring,” Mr. Steinitz, a member of Prime Minister Benjamin Netanyahu’s security cabinet, said in a video interview with Israel’s YNet news website.

“Had a great conversation with Prime Minister @netanyahu this morning. The United States fully supports Israel’s right to defend itself from imminent threats. Under President @realDonaldTrump, America will always stand with Israel!” Mr. Pence wrote on Twitter, without specifying the imminent threats.

Israel, alarmed by Tehran’s rising influence in Syria, says its air force has struck what it deems Iranian targets or Hezbollah arms transfers hundreds of times.

Mr. Netanyahu has hinted at possible Israeli involvement in attacks against Iran-linked targets in Iraq, too.

Mr. Nasrallah pledged on Sunday that his fighters would prevent such attacks from happening in Lebanon at any cost.

UN Resolution 1701, which halted the war, banned all unauthorized weapons between the Litani River in south Lebanon and the UN-monitored border between Israel and Lebanon. 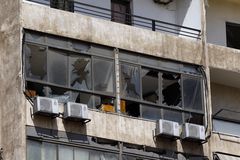 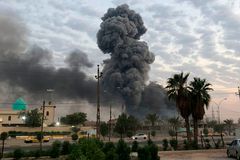