What was supposed to mark the start of a new era for Iraq has turned into a political crisis as the charges of vote tampering grew too loud for Prime Minister Haidar al-Abadi’s government to ignore.

The May 12 election was the first since Iraq declared victory over the Islamic State group, which was in control of one-third of Iraqi territory just three years ago. But the euphoria over that milestone was quickly overshadowed by the charges of voter irregularities that surfaced on the day of the election and grew louder in the weeks that followed.

Adding to the outcry was a suspicious fire days after Parliament ordered the recount that burned down a warehouse believed to contain some of the ballots cast by Baghdad voters.

The Interior Ministry said the June 10 blaze was confined to a storage unit holding the electronic machinery introduced in the election to speed up the vote count and protect against ballot stuffing, and insisted the ballots were secure. But eyewitness reports said some ballots were charred and others soaked as firefighters battled the blaze.

A hand recount of all 11 million ballots could take weeks, if not longer, and promises to delay the already sluggish process of forming a new government.

Still, the populist preacher Muqtada al-Sadr, who came in a surprise first place in the vote, called on his supporters to respect the recount ruling.

“I call on everyone to show restraint and deference to the law, even if they are not convinced by it,” al-Sadr said in a statement.

Thursday’s Supreme Court decision upheld a law ordering a recount passed by Parliament after the initial results showed that two-thirds of current lawmakers would lose their seats. The timing of the law’s passage led President Fuad Masum and the national elections commission to charge lawmakers with political interference.

But the Supreme Court ruled that the legislation was broadly constitutional and endorsed an order to replace the Independent Elections Commission with a panel of nine judges to supervise a recount. The commission, disputing the fraud allegations, had refused to conduct one of its own.

However, the court rejected a measure invalidating all ballots cast abroad and by Iraqis displaced by recent conflict. Chief Justice Medhat al-Mahmoud said that sweeping measure was unjust to voters who cast legitimate ballots.

An estimated 3 million Iraqis live in displaced persons camps, and international groups urged authorities to take measures to ensure they could vote. Many were driven from their homes during battles against the Islamic State group, and are presumed to be overwhelmingly Sunni, reinforcing the perception that they are being marginalized by the Shiite-dominated government in Baghdad.

Still, a hand recount is unlikely to dispel the fraud allegations.

Ahmad al-Abadi, a lawyer representing Parliament’s case to the Supreme Court, said the recount would get the country “70, 80, 90 per cent” of the way to having an untainted result, but that because of the Baghdad warehouse fire there would never be 100 per cent certainty.

Outgoing Parliament Speaker Salim al-Jabouri called the fire arson, but authorities have not named any suspects in their investigation.

A recount is not likely to change the balance of power between the country’s Shiite, Sunni, and Kurdish blocks, according to Bilal Wahab, a fellow at the Washington Institute for Near East Policy.

“The majority of accusations of fraud were from within the communities, and not between them,” Wahab said.

Shiite groups have dominated government since the U.S. invaded Iraq in 2003, deposing Saddam Hussein and ushering in an era of sectarian civil war.

While the charges of voting irregularities in the May election have centred on alleged tampering with the electronic voter machines and falsified results, scores of voters were turned away from voting stations because the election authority failed to issue proper identity documents in time. Those irregularities, as well as reports of voter intimidation and vote buying, will be impossible to detect in a recount said Vian al-Sheikh Ali, director of the election monitoring group Tammuz.

Voter turnout in the election was 44 per cent, the lowest in the post-Saddam era.

The most serious allegations of foul play came from Iraq’s Kurdish provinces, as well as the predominantly Sunni province of Anbar and Kirkuk, a province that Iraq’s regional Kurdish administration claims for its own, al-Sheikh Ali said.

After the results were released, Arab and Turkmen voters in Kirkuk demonstrated in front of the election commission headquarters, saying the margin of victory for a mainstream Kurdish party was not believable.

As the allegations reached a crescendo, Prime Minister Abadi’s government said it had found “unprecedented” violations in the vote, faulting the politically appointed elections commission.

Wahab said the broad nature of the allegations and network of institutions linked to the charges meant it was unlikely voters would ever get to the bottom of the fraud.

“It’s an art that’s been almost perfected in Iraq,” he said. 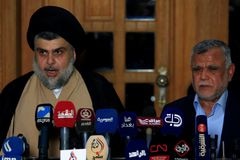 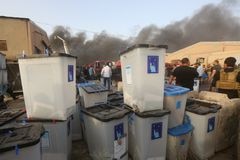