The Israeli military has deployed more than 100 sharpshooters on the Gaza border ahead of a planned mass Palestinian demonstration, Israel’s top general said in an interview published on Wednesday.

Organizers said they expect thousands in Gaza, including entire families, to answer their call to gather in tent cities in five locations along the sensitive border from Friday in a six-week protest for a right of return of Palestinian refugees to what is now Israel.

Citing security concerns, the Israeli military enforces a “no go” zone for Palestinians on land in Gaza adjacent to Israel’s border fence.

Lieutenant-General Gadi Eizenkot, the military’s chief of staff, told the Yedioth Ahronoth daily that the military would not allow “mass infiltration” or tolerate damage to the barrier during the protests.

“We have deployed more than 100 sharpshooters who were called up from all of the military’s units, primarily from the special forces,” Eizenkot said in the interview. “If lives are in jeopardy, there is permission to open fire.”

Israeli soldiers are confronted by frequent violent Palestinian protests along the Gaza border and have used tear gas, rubber bullets and live ammunition against demonstrators who the military said hurled rocks or petrol bombs at them.

Organizers said the protest is supported by several Palestinian factions, including Gaza’s dominant Islamist Hamas movement, which is dedicated to the destruction of Israel.

Nickolay Mladenov, the U.N. special coordinator for the Middle East peace process, called on all sides “to exercise restraint and take the necessary steps to avoid a violent escalation.”

In a statement emailed to Reuters, he said: “Children in particular should not be put at risk at any time by anyone.”

But he said that pressure Hamas was now feeling from Israel’s destruction of some of its network of attack tunnels near the border, coupled with harsh economic conditions in Gaza, were “a formula for rising tension.”

The start of the demonstration was symbolically linked to what Palestinians call “Land Day,” which commemorates the six Arab citizens of Israel killed by Israeli security forces in demonstrations in 1976 over land confiscations. The week-long Jewish holiday of Passover, when Israel heightens security, also begins on Friday.

The protest is due to end on May 15, the day Palestinians call the “Nakba” or “Catastrophe”, marking the displacement of hundreds of thousands of Palestinians in the conflict surrounding the creation of Israel in 1948.

Palestinians have long demanded that as many as 5 million of their compatriots be granted the right to return. Israel rules this out, fearing an influx of Arabs that would eliminate its Jewish majority. Israel argues the refugees should resettle in a future state that the Palestinians seek in the Israeli-occupied West Bank and the Gaza Strip. 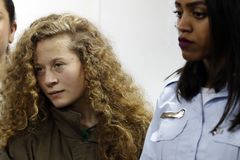 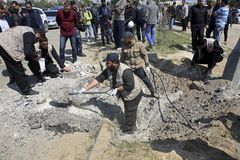