The Israeli parliament will hold a vote of confidence on a new government Sunday, giving Prime Minister Benjamin Netanyahu just four more days to find a way to torpedo the coalition that wants to sink the country’s longest-serving leader.

The Change coalition wanted to hold the vote Wednesday, but Knesset Speaker Yariv Levin, a member of Mr. Netanyahu’s right-wing Likud party, delayed the vote, giving the four-term Prime Minister a long-shot chance of holding onto office until another election is called.

But Mr. Netanyahu’s chances of breaking up the coalition appeared to diminish considerably Tuesday when Nir Orbach, a member of the Yamina opposition party, confirmed his support for the proposed new government.

He had been one of Mr. Netanyahu’s prime targets for defection and had been wavering. The coalition needs 61 seats in the 120-seat Knesset to form a government, and Mr. Orbach’s defection would have probably left it a mere one seat short of victory.

“This is not an easy decision but it is necessary given the reality that we live in … over 700 days of unstable government, a civilian crisis, violent conversation and a sense of chaos,” Mr. Orbach said. “We are on the brink of a civil war.”

He was referring to the four inconclusive elections in the past two years, the widespread unrest within Israel as Jews and Arabs clash with one another and last month’s 11-day war with Hamas, which resulted in more than 250 Palestinian deaths, most of them in Gaza, and 12 deaths in Israel.

While Israelis often refer to Mr. Netanyahu as a political “magician,” many political observers think his time has come, all the more so since he is on trial in Jerusalem on corruption charges.

“He will try to find a defector until the last minute,” said Dimitri Diliani, spokesman for the Democratic Reformists faction of Fatah, the Palestinian party and nationalist movement. “But everyone is waiting for him to go. His first blow came when Donald Trump lost the election. He was banking on Trump’s support for another four years.”

After days of negotiations among eight opposition parties, including the United Arab List, an Islamist party with four seats in the Knesset, the coalition took shape last week.

Its driving forces were Yair Lapid, leader of the centrist Yesh Atid (There is a Future) party, which is the main opposition party, and Naftali Bennett, leader of the far-right Yamina party, which opposes Palestinian statehood. Mr. Bennett, a former Netanyahu loyalist and defence minister, would become prime minister after the new government is sworn in and would be replaced by Mr. Lapid after two years.

The eight left-wing, right-wing and centrist parties are ideologically opposed, raising the prospect that internal divisions over a new budget, how to prop up the postpandemic economy and possibly reviving the long-stalled peace negotiations with the Palestinians would lead to its early demise.

The United Arab List, led by Mansour Abbas, would have the power to deprive the coalition of its majority at any time if the promises made for its support do not come through. They include integration of the Bedouin communities in southern Israel and more than US$16-billion in government development spending for Arab society within the country.

Mr. Netanyahu’s far-right supporters have been putting enormous pressure on some members of Mr. Bennett’s party to vote against the coalition. Some of them have received death threats. Israeli media reported that at least four of the seven Yamina members, including Mr. Orbach, were given additional security as the threats intensified.

A march in Jerusalem that was planned for Thursday by far-right nationalists and supporters of Mr. Netanyahu has been cancelled by police for fear it could turn violent. Mr. Netanyahu was not officially backing the march but did not try to distance himself from it. 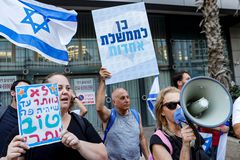 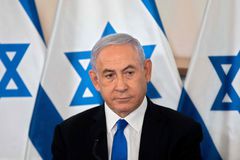 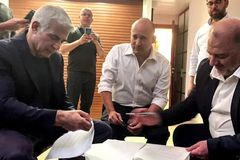