Fighting for his future, Prime Minister Benjamin Netanyahu of Israel on Wednesday said he was asking parliament to grant him immunity from prosecution in three graft cases, a rare and contentious step that critics said violated the principle of equality before the law.

The immunity request is the latest twist in the political and legal drama that has paralyzed the Israeli government for nearly a year. It could delay for months the cases against Mr. Netanyahu, who faces a general election in two months. And if it is approved, immunity could keep him out of court for as long as he remains a member of parliament.

Mr. Netanyahu was indicted in November on charges of bribery, fraud and breach of trust. He has denied any wrongdoing.

He had kept the country guessing about his next move, apparently wary that an immunity request could endanger his re-election prospects and that of his conservative Likud party by fuelling accusations of putting himself above the law.

In an effort to limit the political damage, Mr. Netanyahu played down the effect of his immunity request. Delivering a statement that was broadcast live on television during prime time, he insisted it was a “temporary” measure that would be valid for only one term of parliament.

He said immunity was meant to prevent “political indictments whose purpose is to impair the will of the people,” adding, “Unfortunately, that’s what happened in my case.”

Listing his achievements and promising more, he said, “I intend to continue to lead Israel for many years to come.” He also said he would ultimately disprove the allegations against him in court.

Mr. Netanyahu, Israel’s longest-serving Prime Minister, is running for a fourth consecutive term in an election set for March 2. The country has no limits on the number of terms a prime minister or lawmaker can serve.

The election will be Israel’s third in a year. The campaign, largely focused on Mr. Netanyahu’s fate, was already expected to be divisive, and the immunity request may deepen national fissures over values and the nature of Israeli democracy.

Two earlier elections, in April and September, ended inconclusively, with neither Mr. Netanyahu nor his chief opponent, Benny Gantz of the centrist Blue and White party, able to muster the majority needed to form a viable government.

“I never imagined we would see the day when a prime minister of Israel would avoid standing before the law and the courts,” Mr. Gantz said in a televised statement immediately after Mr. Netanyahu’s announcement.

“Today it is clear what we are fighting for. Netanyahu knows he’s guilty,” Mr. Gantz said, adding that the choice was between “immunity before all else or the citizens of Israel before all else; between the kingdom of Netanyahu or the state of Israel.”

Mr. Netanyahu is accused of trading official favours worth hundreds of millions of dollars to Israeli media moguls for illicit gifts of cigars, Champagne and jewellery, as well as positive news coverage.

Clinging to the premiership – from which analysts say he is better positioned to fight his legal battle – Mr. Netanyahu has long argued that the criminal investigations against him are the result of a witch hunt led by leftist, elitist forces trying to oust him through “fake news” in the liberal media and through the courts.

Immunity that defends a lawmaker’s freedom of speech is indeed “a constitutional institution that is very important,” said Suzie Navot, a professor of constitutional law at the Striks School of Law near Tel Aviv. “But that is not the kind of immunity that Netanyahu is talking about.”

Under Israel’s immunity law, which was amended in 2005, lawmakers no longer have automatic immunity, but must seek it from a parliamentary body known as a House Committee, whose decision must then be ratified by a simple majority in parliament.

The current, caretaker government has not formed a House Committee, and there may not be one to discuss a request by Mr. Netanyahu for weeks or months after the March election, until a new government can be formed. Court proceedings against Mr. Netanyahu would be frozen until any immunity request could be heard.

It is not clear if Mr. Netanyahu would have a parliamentary majority to grant him immunity. Avigdor Lieberman, leader of the right-wing Yisrael Beiteinu party that used to be allied with Mr. Netanyahu’s Likud, and whose votes Mr. Netanyahu would need, said Wednesday night that he would not support the Prime Minister’s bid for immunity.

Prof. Navot, the constitutional law expert, said the parliamentary process of granting immunity is quasi-judicial, requiring evidence to back up the arguments of the person requesting it, and takes place under judicial review.

It would be very hard to prove that law-enforcement authorities acted in bad faith in the Netanyahu cases, she said, especially given the caution Attorney-General Avichai Mandelblit, who indicted the Prime Minister, showed in handling them. Mr. Mandelblit was appointed by Mr. Netanyahu.

Granting Mr. Netanyahu immunity, Prof. Navot said, would be “a fatal blow to the rule of law and equality before the law.”

No lawmaker or minister has been granted immunity since the law was amended in 2005. After Mr. Lieberman was charged in 2012, as foreign minister, with fraud and breach of trust in an episode involving the promotion of an ambassador, he resigned. He was later acquitted in court and returned to his post.

A former prime minister, Ehud Olmert, resigned in 2008 under pressure from rivals within his own government, even before he was indicted on corruption charges. He was ultimately convicted and went to prison.

On Tuesday, Israel’s Supreme Court held a preliminary hearing on whether a prime ministerial candidate charged with serious crimes can even be tapped to form a new government. The hearing was in response to a petition filed by dozens of members of Israel’s high-tech industry and academia.

The court delayed issuing any ruling, even on whether it would take the case, suggesting that judges might weigh in only if the question becomes less hypothetical after the election. The timing is delicate: Any ruling could potentially be seen as interfering in an election campaign, and the judges are already under pressure from conservative forces that are fighting to curb the court’s influence.

In a video released Monday night, Mr. Netanyahu warned the court not to fall into what he called a political trap laid by people trying to foil his candidacy. “In a democracy,” he said, “the people are the only ones who decide who leads the people, and nobody else.” 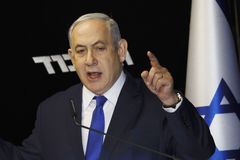 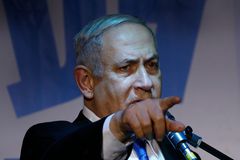