A fierce Israeli campaign against the International Criminal Court, including a demand for punishment of the court’s officials, has left Canada caught in a dilemma on the issue.

Israeli Prime Minister Benjamin Netanyahu, intensifying a campaign that has been under way for weeks, went on a Christian television network on Tuesday to urge its viewers to “rise up” against the ICC and demand sanctions against “everyone” at the court in The Hague.

The Israeli government, outraged at a possible ICC investigation of alleged war crimes against Palestinians, has been asking countries around the world to fight the proposal.

Mr. Netanyahu is also reported to be planning to lobby for support on the ICC issue from dozens of world leaders visiting Jerusalem this week for a Holocaust memorial to mark the 75th anniversary of the liberation of Auschwitz.

The ICC’s chief prosecutor, Fatou Bensouda, announced on Dec. 20 that there was a “reasonable basis” to conclude that Israeli authorities have committed war crimes in the Palestinian territories. She also cited evidence of war crimes by Palestinian armed groups. She asked the ICC to rule on whether the court has jurisdiction in the matter.

According to Israeli media, the Netanyahu government is listing Canada as one of Israel’s supporters on the issue.

The government of Prime Minister Justin Trudeau, not wanting to appear either anti-Israel or anti-ICC, is trying to maintain a low profile on the proposed investigation. Canada played a key role in creating the ICC in the late 1990s, and still helps finance it with millions of dollars annually, including $10.6-million this year.

In response to questions from The Globe and Mail, the Global Affairs department declined to say whether Canada has responded to a letter from Mr. Netanyahu last month, in which he asked Mr. Trudeau to condemn the ICC prosecutor’s decision and to “acknowledge there is not a Palestinian state.”

Despite the Trudeau government’s refusal to make any public criticism of the ICC over the proposed investigation, Israeli newspapers – citing sources in the Netanyahu government – have described Canada as an ally of the campaign. They have reported that Canada responded to the Netanyahu letter by indicating support for Israel’s opposition to an investigation.

Global Affairs Canada spokesman Guillaume Bérubé told The Globe that Ottawa does not recognize a Palestinian state and therefore does not consider it a member of the international ICC treaty. This would mean that the ICC does not have jurisdiction to do investigations in the Palestinian territories.

Israel’s attempt to mobilize global opposition to the ICC, including Mr. Netanyahu’s allegation that the ICC prosecutor is motivated by “pure anti-Semitism,” is the third major international campaign against the court in recent years.

Several African governments, facing the threat of ICC probes of their politicians, have threatened to withdraw from the court and accused it of racism for issuing indictments against only Africans so far. The United States launched its own battle against the court in 2018, threatening to impose sanctions or even criminal prosecutions of any ICC officials who investigate the U.S. military or its allies.

Mr. Netanyahu’s latest attack on the ICC came during an interview on Tuesday with Trinity Broadcasting Network, often described as the world’s biggest religious TV network. Calling for sanctions against all ICC officials, Mr. Netanyahu called the proposed investigation a “travesty” and “a full frontal attack” on “the Jewish people’s right to live in their ancestral homeland.”

Amnesty International, in a statement to The Globe, said Mr. Netanyahu’s call for sanctions on ICC officials is “a flagrant assault on international justice.”

Amnesty’s deputy director for the Middle East and North Africa, Saleh Higazi, said the comment by Mr. Netanyahu “shows callous disregard for the millions of victims and survivors of crimes under international law in situations around the world and undermines their ability to gain access to truth, justice and reparation.”

In his meetings with world leaders at the Holocaust memorial this week, including Russian President Vladimir Putin and U.S. Vice-President Mike Pence, the Israeli Prime Minister will urge them to support his fight against an ICC investigation, according to a report on Tuesday in the Israeli newspaper Haaretz.

Mark Kersten, a Canadian scholar on international justice issues and author of a book on the ICC, said the use of the Holocaust memorial to seek support for an attack on the international court is “cynical and immoral.”

But the Israeli leader’s campaign against the ICC has been “a flop so far,” he said, noting that the public expressions of support have largely been from a few right-wing politicians in the United States, Hungary and the Netherlands. “He’s had years to organize anti-ICC sentiment and failed,” Mr. Kersten said.

Nick Kaufman, an Israeli lawyer who has represented clients and victim groups in ICC cases, said Mr. Netanyahu’s willingness to raise the issue with leaders at the Holocaust memorial “reveals the extent to which he has become obsessed with the threat posed to him by an ICC investigation.”

While no ICC members such as Canada would support sanctions against the ICC prosecutor, Mr. Netanyahu might be able to persuade them to raise a formal dispute under the court’s statute, which would allow the jurisdiction issue “to be determined by the court’s Assembly of State Parties or external arbitration,” he said.

On Tuesday, the ICC announced it is delaying its decision on the proposed Palestinian investigation for procedural reasons. It said the prosecutor’s request for a ruling on the court’s jurisdiction had exceeded the page limit for the filing, but it said she could file a new request at a shorter length. 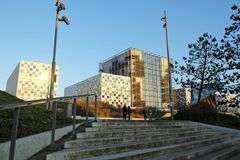