Israel said it successfully launched a new spy satellite into space on Monday as its leaders hinted it was behind a massive fire at an Iranian nuclear site last week – potentially ratcheting up a long-running covert war.

If Israel was responsible for the fire at the heavily fortified Natanz facility, it would mark another in a series of daring strikes against Iran’s nuclear program attributed to Israel, while also risking Iranian retaliation on either Israeli or Western targets.

Prime Minister Benjamin Netanyahu hailed the launch of the new Ofek 16 satellite, the latest addition to a fleet deployed over the past two decades.

Mr. Netanyahu did not mention Iran or last week’s fire.

But the Islamic Republic is Israel’s top security concern and a target of its satellite intelligence-gathering efforts.

After initially playing down last Thursday’s fire, Iranian officials over the weekend confirmed the blaze was much more powerful than initially indicated and that advanced centrifuges at the top-secret facility had been damaged. Iran’s nuclear agency said the damage to the centrifuges, which are used to enrich uranium for both civilian and military purposes, could delay research and development for the “medium term.”

A new satellite photo released Monday by Planet Labs Inc. showed extensive damage to the centrifuge facility. The image, taken Sunday, shows the roof apparently torn away by the blast and debris scattered across the ground.

Iran has not directly blamed the fire on Israel or anyone else.

Israel, which accuses Iran of trying to develop nuclear weapons, has neither confirmed nor denied involvement in the fire. But a growing pile of evidence is pointing toward Israel – one of the few countries with the motivation and capability to pull it off.

In a speech on Sunday, Israeli Foreign Minister Gabi Ashkenazi noted that it was Israel’s long-term strategy to prevent Iran from gaining the ability to build a nuclear weapon. He made no mention of the Natanz incident but noted that Israel takes “actions that are better left unsaid.”

A group calling itself the “Cheetahs of the Homeland” has claimed responsibility for the fire. The fact that Iran experts have never heard of the group, and that Iranian opposition groups denied involvement, has raised questions about possible foreign involvement. The group, claiming its members were dissidents from Iranian security services, referred to the site as “Kashan,” the home of a one-time Jewish community, instead of the modern name of Natanz.

Israel and the U.S. are believed to have created the “Stuxnet” computer virus, which attacked Iran’s nuclear program a decade ago. At the time, Ashkenazi was Israel’s military chief of staff.

More recently, Israel uncovered what it called Iran’s “nuclear archive,” a collection of thousands of documents seized by Mossad agents from a Tehran warehouse in 2018. Israel says the documents prove that Iran intended to develop nuclear weapons and hid its efforts from the international community. Earlier this year, Israel was suspected of crippling an Iranian port in a hacking attack in response to an alleged Iranian cyber attack that targeted Israel’s water supply.

The Natanz fire came less than a week after an explosion in an area east of Tehran that analysts believe hides an underground tunnel system and missile production sites.

Iran has long claimed its nuclear program is for peaceful purposes only. The International Atomic Energy Agency, the U.N.‘s nuclear watchdog, says Iran has been enriching uranium to about 4.5 per cent purity – below weapons grade but higher than the terms of the 2015 U.S.-led international nuclear deal. Workers have also conducted tests on advanced centrifuges, according to the IAEA. Iran says its breaches are a response to President Donald Trump’s decision to withdraw the U.S. from the deal and to impose painful economic sanctions.

Yoel Guzansky, a senior fellow at the Institute for National Security Studies and former Iran specialist on Israel’s National Security Council, said it was difficult to say for sure whether Israel was involved in the fire, either directly or with Western or Arab partners. He also said that not everything that happens in Iran is necessarily the result of cyberwarfare or sabotage.

“Having said that, some of the things that happened in Iran in the last week are not coincidence,” he said.

He said the perpetrators of the fire might have had several goals, most critically to slow Iran’s nuclear program. They might also have wanted to send a message to Iran that there is a cost for continued nuclear research. There might be pressure to draw Iran back to negotiations. Some international players might even dream of fomenting regime change.

“Not everything is related to Israel. But I think Israel should be the most concerned about Iran advancing,” Guzansky said.

Monday’s satellite launch did not appear to be directly connected to the developments in Natanz, given the lengthy preparations involved.

Beyond the nuclear program, Israel is alarmed by Iran’s development of long-range missiles, its support for hostile militant groups and Iran’s ongoing military presence in Syria. Israel believes Iran is trying to help the Lebanese militant group Hezbollah to develop a guided-missile program.

Israel does not confirm the number of its operational satellites but Amnon Harari, the head of the Defence Ministry’s Space and Satellite Administration, mentioned at least two others: the Ofek 5, launched in 2002, and the Ofek 11, launched in 2016.

Foreign threats require “constant monitoring,” he told reporters. “You can assume that once you have more than one satellite in parallel in the sky, you achieve better visit times over the targets of interest.”

Alex Fishman, the defence analyst of the Yediot Ahronot daily, said the suspicion that Israel was involved in last week’s fire made sense, given Iran’s economic troubles and coronavirus crisis.

“Someone decided that a window of opportunity had opened, that Iran was in distress, and that now was the time to strike wherever possible,” he wrote. 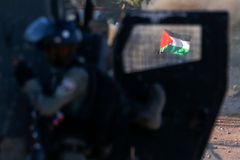 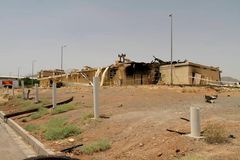 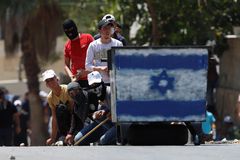