Italy’s new government won a confidence vote in the upper house Senate on Tuesday allowing it to take office following a stormy debate, with Prime Minister Giuseppe Conte and his former deputy Matteo Salvini accusing each other of betrayal.

Conte, backed by the anti-establishment 5-Star Movement and centre-left Democratic Party (PD), won an initial confidence motion in the lower house on Monday, meaning his coalition can now forge ahead with its pro-European agenda.

It clinched the Senate vote by 169 to 133. The result effectively gives Conte an eight seat majority in the 321-seat chamber, meaning it might struggle to push forward legislation on particularly divisive issues like immigration.

Once bitter enemies, the 5-Star and PD unexpectedly agreed to join forces last month after the far-right League walked out of the previous coalition with 5-Star in a failed attempt to trigger snap elections.

League leader Salvini, who served as deputy prime minister and interior minister in the last administration, had hoped to cash in on his surging popularity in the opinion polls, but now faces the prospect of 3-1/2 years in opposition.

Relations between Salvini and Conte, a law professor with no party affiliation, have grown fraught and the two men exchanged insults in a rowdy session of the usually sedate Senate.

“Prime Minister Conte, I do not envy you,” Salvini said. “You got your position through betrayal. I couldn’t sit there even for 15 minutes. I don’t have power, but I have my dignity and the affection of the Italian people.”

Conte said that by attempting to “unilaterally and arbitrarily” bring about early elections Salvini had acted with “arrogance and little knowledge of constitutional law.”

He added that the League leader was trying to find a scapegoat for his failed effort to rush to the polls.

“To try to blame others for the ones’ own errors might be a way to try to safeguard the leadership of one’s party,” he said, his comments repeatedly interrupted by yelling and chanting from the League benches.

While the League was fuming, credit rating agency Moody’s on Tuesday welcomed the arrival of the new coalition, saying it should provide some political stability and allow Rome to submit its 2020 budget on schedule.

Conte has used the back-to-back debates in the two houses of parliament to lay out a wide-ranging policy program, promising expansionary measures to boost the stagnant economy and pledging to bring in tax cuts for households, rather than companies.

He also said his government, Italy’s 67th since World War Two, would forge ahead with legislation to cut the number of parliamentarians and introduce a new electoral law – a fourth stab at rewriting voting rules since 2005.

Conte has stressed that he wants to reset Rome’s often fraught relations with the European Union, saying his government would work with Brussels to revise the bloc’s budget rules, banking norms and immigration laws.

Freed from the constraints of his previous ties to the eurosceptic League, Conte will fly to Brussels on Wednesday for the first foreign visit of his new premiership.

In a stamp of approval for the new Rome government, former PD prime minister Paolo Gentiloni was named on Tuesday as the EU’s next economy commissioner with responsibility for overseeing the EU’s all-important Stability and Growth Pact.

It would have been unthinkable for Italy to have received such a sensitive role had the League still been in office and his appointment guarantees that Conte will have a sympathetic ear if the government needs budget concessions from Brussels. 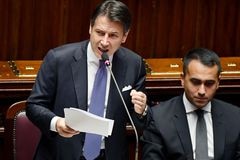 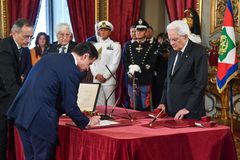 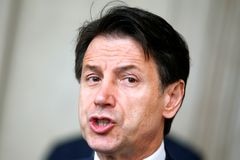