Claudio Olivetti was all smiles Monday morning as he and his employees prepared to reopen La Villetta dal 1940, one of historic Rome’s better-known restaurants and the go-to spot for local celebrities, AS Roma soccer players and the occasional Hollywood star.

As the name implies, the restaurant, located near the city’s ancient Pyramid of Cestius, opened 80 years ago and has operated pretty much non-stop since then – or did until Italy went into lockdown in early March. It was founded by Mr. Olivetti’s grandparents, Silvio and Ada, always catered to locals and felt an obligation to stay open, even on Sundays, to keep them topped up on traditional Roman fare served in unpretentious surroundings.

“We were never closed so long as now, not even during the war,” said Mr. Olivetti, who is 55 and acts as the restaurant’s host and greeter as well as its owner. “When Rome was being bombed, my grandparents would go into the cantina [storage cellar] with their clients and come up and make a spaghetti alla carbonara when the planes left.”

Italy’s restaurants and bars and almost all other shops, including hairdressers, opened for business Monday, two weeks after factories and parks reopened. Churches also came out of lockdown. For the first time since the coronavirus crisis kept them at home, Italians no longer have to carry certificates to justify their fleeting presence outdoors to buy groceries and medicines and can travel within their own regions.

On May 25, sports centres and swimming pools will reopen. A week later, travel among regions will be allowed and Italy will open its doors to European visitors in a bid to jump-start its tourism industry, which accounts for a hefty 13 per cent of gross domestic product.

Other European countries were taking their first steps to reopening their economies, too. On Saturday, the Bundesliga, the German soccer league, played its first postquarantine games, although the stadiums were empty.

Italian Prime Minister Giuseppe Conte was reluctant to open the shops this week but came under enormous political pressure from both allies and rivals, who predicted catastrophe if the economy remained largely shut for much longer. Already, Italy and most of the rest of Europe are in deep recession, and Italian sovereign borrowing costs have climbed as investors take the view that the economy will not bounce back quickly.

Mr. Conte said physical-distancing rules and other precautions would stay in place, as the pandemic is far from over in Italy, even though the infection and fatality rates have fallen sharply since their peaks in late March. “We’re facing a calculated risk, knowing that the epidemiological curve could rise again,” he said over the weekend.

In an interview published May 16 in Italy’s La Repubblica newspaper, Giuseppe Ippolito, the scientific director of Rome’s Spallanzani infectious disease hospital, warned that reopening almost all of Italy’s shops at once risks a second COVID-19 outbreak. “Any lowering of the [quarantine] measures must go hand in hand with an increase in responsibility and awareness of the risks from citizens,” he said. “A rebound in infections would be dangerous, because it would generate among Italians a sense of despair, of helplessness and even mistrust in the system.”

By Monday, Italy had confirmed almost 32,000 coronavirus-related deaths, the third-highest in the world, after the United States and Britain. The number of confirmed infections, at more than 225,000, was the fifth-highest. Italy was the first country to go into lockdown in its entirety after an explosion of cases in the north, which became the original European COVID-19 hot spot.

Half the country’s deaths have been recorded in one region, Lombardy, whose main city is Milan. Southern Italy, including the Rome area, has seen relatively few cases. The Spallanzani hospital, which went through the Ebola and HIV crises, has had remarkably good success in containing, then reducing, the outbreak in and around the city.

While Italian restaurants have reopened, physical-distancing requirements mean they can only operate at about one-half to one-third capacity, if they can operate at all.

Mr. Olivetti said he thought many small restaurants – those of about 400 square feet or so – would not be able to stay open because of the enforced reduction in paying customers.

On Monday morning, La Villetta’s dozen remaining employees – eight were let go – were busy scrubbing floors, installing disinfectant stations and removing tables to ensure the remaining ones were at least two metres apart. The effort reduced the seating in half, to 73.

Mr. Olivetti is not sure yet whether the restaurant will be able to make money at half-capacity.

“Right now, we’re just surviving,” he said. “It’s not about making profits. We used to get 150 to 200 reservations a night. Now we’ll have to make do with maybe 50. But at least we have the advantage of having a lot of space. The small restaurants are dead.”

Some spots are experimenting with Plexiglas dividers to separate customers. But it does not appear they will become popular, if only because they will be difficult to keep clean. Hairdressers will struggle, too, because only one customer will be allowed into the shops at a time.

While cafés and churches open in Greece and Italy, Spain eyes summer reboot
May 18, 2020 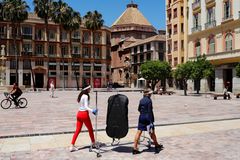 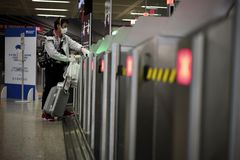 A team of coronavirus medics from Canada leave Italy as saviours and honorary citizens
May 13, 2020 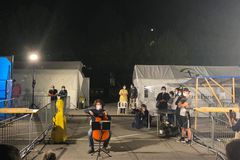