The Democratic primary has narrowed to a two-way race heading into a crucial Super Tuesday vote that pits front-runner Bernie Sanders against a resurgent Joe Biden, and with billionaire Michael Bloomberg facing the first test of whether voters have warmed to his self-financed campaign.

Mr. Sanders, 78, amassed an early lead in national polls after victories in Iowa, New Hampshire and Nevada. But in recent days, the party’s moderate wing lined up behind Mr. Biden. Pete Buttigieg, former mayor of South Bend, Ind., and Minnesota Senator Amy Klobuchar suspended their presidential bids and were set to endorse the former vice-president at a rally in Dallas on Monday night, just hours before voters in 14 states cast ballots.

As recently as last week, Mr. Biden, 77, was struggling to hit 15 per cent in polls in several Super Tuesday states, a crucial threshold needed to win delegates to support him at the nominating convention this summer. But he has surged after a resounding victory in South Carolina on Saturday, earning him last-minute endorsements from several Democratic Party establishment figures, including former Senate majority leader Harry Reid. “Joe Biden’s strength of character and deep experience stand in the starkest contrast to Trump’s amorality, corruption and utter incompetence,” Mr. Reid said in a statement on Monday.

14 states vote in Super Tuesday contests with 1,357 delegates up for grabs. Here’s who is currently leading the race

With more than a third of the available delegates up for grabs, Super Tuesday is the most important day in the Democratic primary, influencing later votes in battleground states such as Michigan, Florida and Ohio.

The shifting currents are playing out most intensely in California and Texas, which together choose nearly half the 1,357 pledged delegates to be awarded on Tuesday. Mr. Sanders held a double-digit lead in California heading into the vote, although Mr. Biden has jumped from a distant fifth into second place.

The narrowing of the field may also help Massachusetts Senator Elizabeth Warren, who was polling in third place in California.

Mr. Biden and Mr. Sanders are running neck-and-neck in Texas.

Still unknown is whether former New York mayor Michael Bloomberg can turn a multimillion-dollar ad campaign in Super Tuesday states into a big win among moderate Democrats not yet sold on Mr. Biden’s political comeback.

“If his strategy of overwhelming all of the other candidates financially is going to play well, it’s going to play well in a state like Texas, where you really do need a lot of money to compete effectively and where our Democratic primary voters are significantly more conservative,” said political scientist Mark Jones of Rice University in Houston.

In the days before the vote, candidates and their surrogates campaigned across California, whose 415 pledged delegates are the key prize on Super Tuesday.

“The candidate who wins here in California will likely be the Democratic nominee,” Mr. Sanders told 9,500 supporters in downtown San Jose on Sunday.

In a nod to Mr. Biden’s resurgent campaign, Mr. Sanders took rare shots at his long-time Senate colleague. “Joe Biden is a friend of mine,” he said, before attacking Mr. Biden for supporting the war in Iraq, “terrible trade agreements like [the North American free-trade agreement],” and cuts to social services. “We’ve got to be honest and we have to say: Which campaign can beat Trump?”

Standing in the crowd in a homemade shirt that read “Bernie Bro,” tech worker Max Caldwell said he was attracted to Mr. Sanders’s extremely left-wing views. After supporting Hillary Clinton in 2016, Mr. Caldwell decided moderate Democrats had no path to victory in the Trump era. "We just keep losing to more abrasive leaders, people who are willing to advocate in a way that is a little bit more anti-establishment,” he said. “So the fact that he’s trying to make the party more extreme, that’s what I find appealing.”

But Mr. Sanders will have to contend with a rapidly consolidating moderate wing that appears to be reviving Mr. Biden’s campaign. Speaking to Biden supporters at a women’s co-working space in San Francisco’s tony Marina district on Friday, Jill Biden said her husband stands the best chance of uniting Democrats and appealing to swing voters.

“Joe can beat Trump. If you look at the polls, he’s beating him in Pennsylvania, Ohio, Wisconsin and Michigan,” she said. “Joe can win those states. Joe can lead the ticket of moderate Democrats.”

She found a receptive audience among the crowd of professionals, many of whom said they had turned to Mr. Biden after California Senator Kamala Harris dropped out of the race.

Several were drawn to Mr. Biden because they feared that in other states, Mr. Sanders would alienate moderate voters, who might vote Republican in key Congressional races. “Even if we win the presidency, if we lose the House and we cannot improve the Senate, we’re hosed for another four years,” said Angela Solleder, a nurse practitioner in San Francisco. “That’s it. I’m going for Biden.”

Mr. Biden’s rise has complicated the path forward for Mr. Bloomberg. The founder of financial data and communications firm Bloomberg LP has positioned himself as the more electable of the two moderates, hoping massive advertising spending can offset rocky debate performances.

“With every plan that he has, he has a way to pay for it,” Mr. Bloomberg’s long-time girlfriend, Diana Taylor, told a recent gathering of the country’s largest Democratic Club in Rossmoor, a sprawling retirement community east of San Francisco. “He is practical. He is all about getting things done that are doable and having plans for where you want to get.”

Mr. Bloomberg’s track record as New York mayor appealed to Rossmoor resident Wendy Prufer, who cast an early ballot for him. “He's the only one who can beat Trump,” she said. “They're both very wealthy men. They know each other.”

Sitting beside her, neighbour Lorraine Gousman wasn’t convinced. “I’m so confused,” she said. “I’ve never been confused like this. For me, I just want a candidate that can beat Trump." 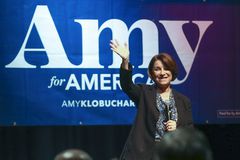 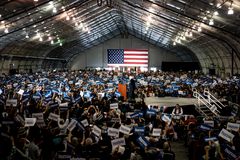 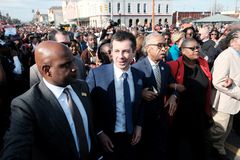