The personal doctors of Alexei Navalny, the imprisoned Russian opposition leader, sharply escalated their warnings over the weekend about his health failing from a hunger strike, the lingering effects of an attempted poisoning with a chemical weapon and what they said was ill treatment in prison.

Isolated behind prison walls and treated only by government doctors, Navalny is now at risk of dying “at any moment” from kidney and heart ailments, said a personal physician, Dr. Yaroslav Ashikhmin.

With the reports of Navalny’s deteriorating health, his supporters announced a street protest in what they called a final effort to persuade authorities to allow access for independent doctors and to draw attention to the grim standoff over health care in detention for Navalny. The activist is nearly three weeks into a hunger strike over his medical treatment in prison.

The health alarms also prompted an international reaction. The U.S. national security adviser, Jake Sullivan, said in an appearance on CNN that the Russian government would face “consequences if Mr. Navalny dies.”

“We have communicated to the Russian government that what happens to Mr. Navalny in their custody is their responsibility, and they will be held accountable by the international community,” Sullivan said.

After spending months in a Berlin hospital recuperating from being poisoned, Navalny returned to Russia in January despite the government’s threats of arrest. He was arrested at the airport and subsequently convicted in a show trial of violating parole and sentenced to more than two years in prison.

Navalny, who is 44, had been in good health before narrowly surviving an attack with a rare nerve agent last summer. He and Western governments blamed the Kremlin. Putin has denied any role in the poisoning, and prison officials say they are providing adequate care.

But Navalny’s lawyers have not ruled out lingering effects of the chemical weapon on his health. Navalny, the main political opponent of Putin for a decade now, has reported severe back pain and the loss of sensation in his legs and arms. Prison doctors found slipped disks in his back.

He was later moved to a prison infirmary with a high temperature and coughing. The prison told Navalny and his lawyers that tests for COVID-19 and tuberculosis, a common contagion in Russian prisons, had been negative.

Blood tests, though, showed signs of possible kidney failure that could cause a lethal irregularity in Navalny’s heartbeat, Ashikhmin said in a post on social media. He noted abnormally high levels of potassium in Navalny’s blood.

“Our patient could die at any moment,” Ashikhmin wrote. “A patient with this level of potassium should be in intensive care as at any moment a fatal arrhythmia could develop.”

Members of Navalny’s political organization have called the withholding of care a slow-motion assassination attempt by the Russian government. Over the weekend, their warnings became more dire. After doctors raised alarms, Navalny’s political allies said Sunday that if treatment was withheld, he would die within days, and called for the street protest in Moscow on Wednesday.

Navalny’s political and anti-corruption organizations also faced a new legal threat after prosecutors filed a request Friday with a Moscow court to include them on a list of “extremist” groups. Under Russian law, the move is akin to a terrorist designation.

If the court accepts the filing, Navalny’s non-governmental groups and nationwide network of political offices will be disbanded. And under the law, anybody speaking publicly or posting online about the groups after a ban could be sentenced to a lengthy prison term.

It was the latest signal of an ever-hardening line within Putin’s government against opponents at home and abroad – and an effort to convey the domestic opposition as associated with a foreign threat. The Russian military has been massing troops this spring near the Ukrainian border.

Prosecutors in a statement said of Navalny’s supporters that, “under the cover of liberal slogans, these organizations engaged in creating conditions for destabilizing the social and sociopolitical situation.” It said the groups wanted to stage a “colour revolution,” implying, in Russian political parlance, that they were aided from abroad.

The legal filing came a day after the Biden administration announced the expulsion of Russian diplomats from Washington and new sanctions to squeeze Russian government finances. Those moves were in response to accusations of hacking and meddling in U.S. elections. 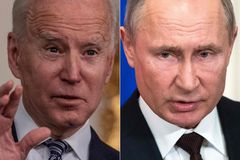 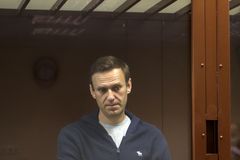 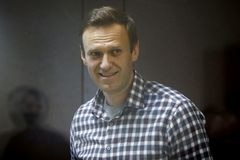