Hong Kong democracy activist Joshua Wong, a central figure in the territory’s continuing mass anti-Beijing protests, urged Taiwanese people on Tuesday to hold their own demonstrations as they face growing pressure from China.

“We hope that before Communist China’s National Day on Oct. 1, our friends in Taiwan can express their support for Hong Kong through street protests,” Mr. Wong, 22, said at a news conference in Taipei.

Some activists in Hong Kong fear Chinese authorities will crack down on the protests ahead of National Day, which this year marks the 70th anniversary of Communist rule in China.

Beijing has claimed sovereignty over self-ruled Taiwan since the two separated during a civil war in the 1940s and has threatened the use of force, if needed, to unify the two sides.

“A lot of people in the past have said, ‘today, Hong Kong, and tomorrow, Taiwan,'" Mr. Wong said. The phrase implies that China intends to rule Taiwan eventually as it does Hong Kong now.

“But I think the most ideal thing we’d say is, ‘Taiwan today; tomorrow, Hong Kong,'" Mr. Wong said. “Hong Kong can be like Taiwan, a place for freedom and democracy.”

China took control of Hong Kong from Britain in 1997, but pledged to give the financial centre a measure of autonomy for 50 years. Protesters believe a proposed extradition law that would let Hong Kong suspects be sent to the mainland for trial goes against that autonomy. More than a million people have joined the demonstrations since they began in June.

Chinese officials have stepped up military, diplomatic and economic pressure against Taiwan since 2016, when Taiwanese President Tsai Ing-wen took office. Tsai rejects Beijing’s call for negotiations on the precondition that both sides belong to a single China. About 80 per cent of Taiwanese oppose unification with China, according to a government survey in January.

Ms. Tsai’s government frequently speaks out in favour of the Hong Kong protests, infuriating Beijing. Protests in Hong Kong make Taiwanese “increasingly treasure” their democracy and “deeply feel” what it would be like if China treated Taiwan the way it’s handling Hong Kong, Ms. Tsai said in June.

“I think Taiwan is always speaking out for Hong Kong, and Joshua Wong coming will make more Taiwanese care more about speaking out,” said Ku Chung-hwa, a board member with the Taiwan advocacy group Citizens’ Congress Watch.

Mr. Wong began his activism as a university student during Hong Kong’s Umbrella Movement protests of 2014 and was later jailed for his role. He and another core member of Demosisto were detained again last week and granted bail after being charged with inciting people to join a protest in June.

The Light Foundation, an advocacy group affiliated with Taiwan’s ruling Democratic Progressive Party, invited Mr. Wong to Taiwan this week because it was “quite concerned” about the protests in Hong Kong, a foundation publicist said.

Mr. Wong also appealed on Tuesday for help from Germany.

In a letter to German Chancellor Angela Merkel carried by the Bild newspaper, Mr. Wong referred to the civil-rights movement that almost three decades ago successfully toppled the Communist regime in East Germany, where Ms. Merkel grew up.

“The Germans bravely were in the first line in their fight against authoritarianism in the ‘80s,” he wrote, according to Bild. “You grew up in East Germany, you made first-hand experiences regarding the terror of a dictatorial regime.”

“We wish that you will show the courage and the decisiveness against authoritarian regimes that inspired Germany and Europe before the end of the Cold War,” Mr. Wong wrote. 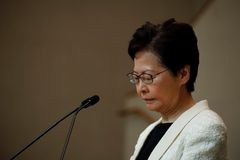 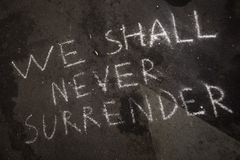 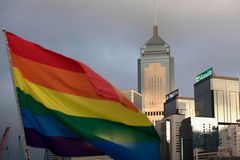