Hashim Thaci, the man who delivered independent Kosovo on to the international stage, was en route to Washington on Wednesday, hoping to again make history at a peacemaking summit hosted by U.S. President Donald Trump, when an allegedly darker part of his own past caught up with him.

Mr. Thaci, who was a commander in the Kosovo Liberation Army in the 1998-99 war that led to his country’s independence from Serbia, was publicly accused on Wednesday of “a range of crimes against humanity and war crimes, including murder, enforced disappearance of persons, persecution, and torture” in an indictment unsealed by the Kosovo Specialist Chambers, a court based in The Hague.

The court said that Mr. Thaci, 52, and nine co-defendants – including Kadri Veseli, the leader of Mr. Thaci’s Democratic Party of Kosovo – were “criminally responsible for nearly 100 murders.”

“The crimes alleged in the indictment involve hundreds of known victims of Kosovo Albanian, Serb, Roma and other ethnicities and include political opponents,” the court said.

The timing of Wednesday’s announcement was nearly as dramatic as the accusations against Mr. Thaci. The indictments were made public after Mr. Thaci had left Kosovo for a weekend meeting with Serbian President Aleksandar Vucic in Washington that the Trump administration had hoped would turn into a treaty of some sort – and a diplomatic achievement to boast about ahead of the U.S. presidential election in November.

The Trump administration’s efforts to forge a peace deal between Serbia and Kosovo, while leaving the European Union out of the process, had deeply irritated many in Europe. The German government, in particular, openly worried that the peace effort lacked popular support and could lead to more instability in the region.

While the Kosovo Specialist Chambers has long been expected to try and target Mr. Thaci, whom Balkan political expert Jasmin Mujanovic called “the godfather of Kosovo politics,” the timing of the indictments was the subject of immediate speculation.

“Some are suggesting that this may or may not be an attempt by certain European actors to undermine the White House peace effort,” said Mr. Mujanovic, a political scientist and author of a book on democracy in the Balkans.

Shortly after the indictment was made public, it was announced that Mr. Thaci would not take part in the Washington meeting, and that Prime Minister Avdullah Hoti – Mr. Thaci’s political rival – would take his place.

“I respect his decision not to attend the discussions until the legal issues of those allegations are settled,” tweeted Richard Grenell, the U.S. ambassador to Berlin who doubles as the controversial White House envoy to Serbia and Kosovo.

Mr. Grenell suggested that the peace push would carry on without Mr. Thaci’s involvement.

The peace push worried many in Brussels and Berlin because it was premised on a land swap – the sort of deal not seen in Europe since the end of the Second World War. A map of the proposed pact that was leaked last year showed Serbia reclaiming the northern Mitrovica region of Kosovo, where ethnic Serbs form a majority of the population, while Kosovo took the Presevo Valley, an Albanian-populated area in southern Serbia, in exchange.

There were fears that such a deal might raise other questions about where the borders should be in the Balkans, particularly in fragile Bosnia-Herzegovina, where an awkward truce – but no formal peace agreement – persists between Serbs, Croats and Bosnian Muslims who fought each other in a separate 1992-to-1995 war.

Mr. Mujanovic said the absence of Mr. Thaci “makes it more likely that the meeting will be a complete dud – I’m not sure that Vucic will even want to meet with Hoti because he knows he’s not actually a credible, relevant actor in his own right.”

The Kosovo Specialist Chambers said Mr. Thaci and his co-defendants had actually been charged on April 24, though the news wasn’t made public at the time. The court said it decided to go public on Wednesday because of a campaign Mr. Thaci and his allies had launched to undermine the court.

“Mr. Thaci and Mr. Veseli are believed to have carried out a secret campaign to overturn the law creating the court and otherwise obstruct the work of the court in an attempt to ensure that they do not face justice,” the court said in a statement on its website.

The alleged crimes were committed by Kosovar fighters seeking independence for their state, a campaign that brought massive retribution from the Serbian regime of Slobodan Milosevic, who unleashed paramilitary forces that committed mass atrocities. NATO eventually intervened on the side of the KLA, launching a campaign of air strikes that included the bombing of the Serbian capital Belgrade. Canadian warplanes played a key role. After 78 days of NATO attacks, Mr. Milosevic ordered the withdrawal of Serb forces from Kosovo.

But while Mr. Milosevic and other top Serbian commanders have already faced justice at The Hague – Mr. Milosevic died in captivity in 2006 while awaiting a verdict on charges including genocide, relating to the forced deportation of 800,000 Kosovar Albanians – there have been few successful prosecutions of top KLA figures. The Kosovo Specialist Chambers, which operates under Kosovar law, was established in 2017 to try and deal with that imbalance.

Mr. Thaci rose through the ranks of the KLA while living in Switzerland, which has a large Kosovar diaspora, and where Mr. Thaci’s role was to raise money and buy weapons for the movement. By the time of the war, Mr. Thaci led its most powerful faction of the KLA. In the aftermath, he was named prime minister of the breakaway statelet, and he led the country through its declaration of independence in 2008 – a status still not recognized by Serbia, as well as its allies including Russia and China.

Mr. Thaci was elected President, a post with less control over domestic affairs, but chief responsibility for foreign relations, in 2016.

Editor’s note: Due to an editing error, an earlier version of this article attributed a partial quote to Mr. Vucic when it was Mr. Mujanovic speaking. 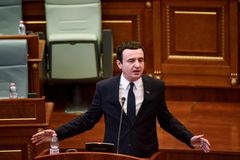 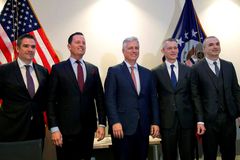 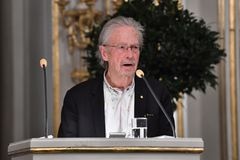