When the nine African women lost their jobs as domestic workers in Saudi Arabia because of the coronavirus lockdown, the agency that had recruited them stuffed them in a bare room with a few thin mattresses and locked the door.

Some have been there since March. One is now six months pregnant but receiving no maternity care. Another tore her clothes off in a fit of distress, so the agency chained her to a wall.

The women receive food once a day, they said, but don’t know when they will get out, much less be able to return to their countries.

“Everybody is fearing,” one of the women, Apisaki, from Kenya, said via WhatsApp. “The environment here is not good. No one will listen to our voice.”

Families in many Arab countries rely on millions of low-paid workers from Asia and Africa to drive their cars, clean their homes and care for their children and elderly relatives under conditions that rights groups have long said allow exploitation and abuse.

Now, the pandemic and associated economic downturns have exacerbated these dangers. Many families will not let their housekeepers leave the house, fearing they will bring back the virus, while requiring them to work more since entire families are staying home, workers’ advocates say.

Other workers have been laid off, deprived of wages and left stranded far from home with nowhere to turn for help.

In Lebanon, employers have deposited scores of Ethiopian women in front of their country’s consulate in Beirut because they could no longer pay them as the economy imploded.

Persian Gulf countries alone had nearly 4 million domestic labourers in 2016, more than half of them women, according to a study for the Abu Dhabi Dialogue, which focuses on migrant labour in the region. Experts say the real number has risen since and is probably much higher.

Hundreds of thousands of foreign housekeepers and nannies work in other Arab countries, including Lebanon and Jordan, giving the Arab world the most female domestic migrant workers of any region, according to the International Labor Organization.

Most come to the Middle East through recruitment agencies and are employed under a sponsorship system that links their residency status to their jobs, giving their employers tremendous power. In many cases, they cannot quit without losing their residency, or move to new jobs or leave the country without an employer’s permission.

And in practice, many employers confiscate workers’ passports and deprive them of time off, rights groups say. Some prevent them from using cellphones or the internet. Physical and sexual abuse are common.

“You have this person who controls your every movement, and you are in their house 24/7,” she said, “so imagine the kind of power that gives them.”

Alarm among such workers rose as COVID-19, the disease caused by the coronavirus, spread across the Middle East and shook the economies many migrants depend on.

“Even in cases of extreme abuse, workers are hesitant to leave their employers, as they fear being made completely homeless,” Saraswathi said.

Dozens of Kenyan women in Saudi Arabia have complained of “not enough food, no rest, violence, even being threatened, trapped and monitored,” said Ruth Khakame, chairwoman of the National Domestic Workers Council of Kudheiha, a Kenyan union. “You’re being denied from using your phone. So you’re struggling, you’re alone and you’ve nowhere to turn.”

Fear of contagion has upset relations between many domestic workers and their employers. Some who used to get breaks when their employers left for the office now have to serve and clean up after entire families stuck at home all day. Other families distrust their workers as potential vectors for the virus.

“From the beginning, my employers were not friendly,” said Justine Mukisa, 33, a Ugandan working in Oman. But during the pandemic, her salary of about $180 per month has been cut in half, her workload has increased and her employers have grown hostile.

“Before coronavirus, we sometimes played with the children,” she said. “Now this is not allowed. My employers do not want me to touch their food or sit near them.”

In recent years, a number of countries have passed regulations regarding domestic workers, granting them one day off each week, annual or biannual leave and an end-of-service benefit based on length of employment.

Qatar has capped the workday at 10 hours, the United Arab Emirates and Kuwait at 12 hours and Saudi Arabia at 15 hours. Kuwait has a monthly minimum wage of about $195 for domestic workers. Kenyans in Saudi Arabia are supposed to earn at least $375 per month plus benefits, and the Philippines has set a $400 minimum wage for its citizens across countries.

As the coronavirus has spread, Bahrain, Kuwait and the Emirates have facilitated visa renewals to stranded migrants to help them avoid fines and detention if their residency status lapses. Qatar and Saudi Arabia have announced free treatment for migrant workers who get COVID-19.

But workers’ advocates say that enforcement of regulations is often spotty and that those who face abuse have little recourse.

“The way these countries have perfected this system of disposable labour lends itself to a high level of exploitation,” said Mustafa Qadri, the executive director of Equidem, a labour rights organization based in Britain.

Those who get the virus can be easily discarded by their employers.

Two months ago, Hanico Quinlat, a Filipino domestic worker in Saudi Arabia, came down with a severe headache and moved into her agency’s hostel to recover. When she tested positive for COVID-19, the agency supervisor locked her in a room alone, giving her only painkillers and vitamin C to treat her illness.

“When they give us food, they throw it into the room,” Quinlat said by telephone from the room where she was being held. “We are people, not animals.”

Among the most vulnerable workers are women who have fled their employers or entered countries on tourist visas, hoping to freelance.

Kelleh Njoki, 25, arrived in Dubai from Kenya as a tourist in February seeking work, but soon discovered she was pregnant. She is now sleeping in a crowded private dorm and cannot afford maternity care or a $400 repatriation flight.

“I’m seven months pregnant; how am I going to have my baby here?” she said in a phone interview. “I’m stuck. I’m confused. I really need help.”

For Apisaki, the Kenyan locked up with eight other women in the Saudi capital, Riyadh, the trouble started when she left her job last month after not being paid for months and returned to her recruiting agency, she said.

She was soon held with others from Kenya and Uganda who also had no work and no way to get home because of the lockdown – and because the agency had taken their passports.

The New York Times verified the details of the women’s confinement through interviews with two women in the room, including Apisaki, who is being identified only by her middle name for her safety, and videos she shared showing their conditions.

The women are in a single room whose only sunlight comes from a small window that was recently taped shut. They share a toilet, wash clothes in the sink and cook one meal per day when the agency drops off food. The pregnant woman hasn’t seen a doctor in months, Apisaki said, and the woman who tore off her clothes spent weeks lying naked on the tile, her arm chained to the wall.

New arrivals are not tested for the coronavirus, potentially endangering the others in a country recording thousands of new cases daily.

Last week, the Kenyan Embassy in Riyadh announced a possible repatriation flight to Nairobi but said travellers had to prove they did not have COVID-19, buy a $525 ticket and quarantine once home.

But Apisaki can’t get tested or fly if she can’t leave the room, and her efforts to reach the embassy have failed, she said.

The women said they had been locked up by their Saudi agency, Almuhait Recruitment. It did not respond to requests for comment on Sunday.

In an e-mailed response to questions, Peter Ogego, the Kenyan ambassador to Saudi Arabia, said that he was alarmed by the “serious allegations” of the women’s detention and that he would work with the Saudi government “to bring justice to the victims and address the loopholes in the law and any underlying causes.”

But he said it was Saudi Arabia’s job to ensure the safety of foreigners working there and questioned Apisaki’s inability to reach embassy officials.

“Much of our work is daily spent largely addressing such allegations,” he wrote.

After The New York Times contacted Almuhait Recruitment about the women’s situation on Sunday, Apisaki told an associate outside of Saudi Arabia that several of the women, including the pregnant woman, had been taken to a hospital for medical checkups and COVID-19 tests.

“They can’t hold women without any right,” Apisaki said. “I don’t get sun to my body, no space to stretch my legs, to walk or exercise. These are the things that make my brain crazy.” 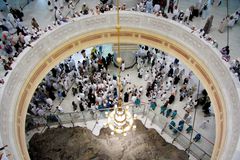 Mosques reopen in Saudi Arabia and Jerusalem after more than two months
May 31, 2020 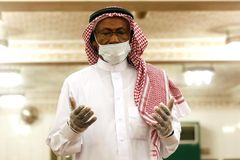