Dozens of jade miners killed in a landslide in northern Myanmar were buried on Saturday, a local official said, after 77 were interred in a mass grave on Friday in one of the worst mining accidents in the country’s history.

More than 170 people, many of them migrants seeking their fortune in the jade-rich Hpakant area of Kachin state, died after mining waste collapsed into a lake on Thursday, triggering a surge of mud and water.

The miners were collecting stones in Hpakant, the centre of Myanmar’s secretive billion-dollar jade industry, when the wave crashed onto them, entombing them under a layer of mud.

Thar Lin Maung, a local official from the information ministry, told Reuters by phone 171 bodies had been pulled out but more were floating to the surface.

He said the 77 people buried on Friday had been identified. Another 41 were interred on Saturday, another local official said. Volunteers carried plywood coffins and placed them into a mass grave carved out by diggers close to the mine site.

Dozens more were cremated in line with Buddhist traditions at a cemetery on a hillside. Among them was 21-year-old Saw Myint Tun, a university student who had travelled hundreds of miles from his home in Rakhine state, his family told Reuters.

His brother-in-law, Hla Shwe Win, said one of his brothers had also died in the disaster, while another was wounded.

They had followed him to Hpakant to work in the mines, Hla Shwe Win said, as women wept over the coffin before it was burned in line with Buddhist traditions.

“They came here, counting on me,” he told Reuters, saying there were no words to describe how he felt.

Many other bodies, battered and stripped of their clothing by the force of the wave that hit them, have not been identified.

Myanmar supplies 90% of the world’s jade, the vast majority exported to neighbouring China, which borders Kachin state. Deadly landslides and other accidents are common in the mines, which draw impoverished workers from across Myanmar.

Myanmar’s leader, Aung San Suu Kyi, on Friday blamed the disaster on joblessness in the country, lamenting in a Facebook Live broadcast that informal workers had to go to the mines for lack of other employment.

The government announced the formation of a committee to investigate the disaster.

Activists say little has changed in the industry, despite a pledge from Suu Kyi’s government to clean it up when she took power in 2016.

The London-based environmental watchdog Global Witness said the accident “is a damning indictment of the government’s failure to curb reckless and irresponsible mining practices in Kachin state’s jade mines. The government should immediately suspend large-scale, illegal and dangerous mining in Hpakant and ensure companies that engage in these practices are no longer able to operate,” it said in a statement.

It says the trade is worth billions of dollars a year, funds it says fuel armed conflict between government troops and ethnic Kachin rebels fighting for greater autonomy for the region.

Social activists have complained that the profitability of jade mining has led businesses and the government to neglect enforcement of already very weak regulations in the jade mining industry.

“The multi-billion dollar sector is dominated by powerful military-linked companies, armed groups and cronies that have been allowed to operate without effective social and environmental controls for years,” Global Witness said.

Although the military is no longer directly in power in Myanmar, it is still a major force in government and exercises authority in remote regions.

Global Witness documented the $31-billion estimate for Myanmar’s jade industry in a 2015 report that said most of the wealth went to individuals and companies tied to the country’s former military rulers. More recent reliable figures are not readily available.

It said at the time the report was released that the legacy to local people of such business arrangements “is a dystopian wasteland in which scores of people at a time are buried alive in landslides.”

Thursday’s death toll surpasses that of a November 2015 accident that left 113 dead and was previously considered the country’s worst. In that case, the victims died when a 60-meter–high mountain of earth and waste discarded by several mines tumbled in the middle of the night, covering more than 70 huts where miners slept.

Those killed in such accidents are usually freelance miners who settle near giant mounds of discarded earth that has been excavated by heavy machinery. The freelancers who scavenge for bits of jade usually work and live in abandoned mining pits at the base of the mounds of earth, which become particularly unstable during the rainy season.

Most scavengers are unregistered migrants from other areas, making it hard to determine exactly how many people are actually missing after such accidents and in many cases leaving the relatives of the dead in their home villages unaware of their fate.

Jade mining also plays a role in the decades-old struggle of ethnic minority groups in Myanmar’s borderlands to take more control of their own destiny.

The area where members of the Kachin minority are dominant is poverty stricken despite hosting lucrative deposits of rubies as well as jade.

The Kachin believe they are not getting a fair share of the profits from deals that the central government makes with mining companies.

Kachin guerrillas have engaged in intermittent but occasionally heavy combat with government troops. 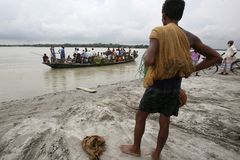 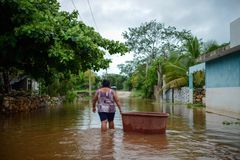