Ethiopia’s much-praised transition to democracy is under increasing jeopardy after a tumultuous month of postponed elections, political arrests, media shutdowns and a wave of violent unrest that has killed at least 166 people.

Access to the internet was blocked in Ethiopia again on Monday for a seventh consecutive day, while an opposition party reported that five of its top leaders had been detained by security forces.

Just eight months ago, Ethiopian Prime Minister Abiy Ahmed was awarded the Nobel Peace Prize for his efforts to bring democracy and peace to his country and its Horn of Africa neighbours. But now his achievements are threatened by deadly clashes in the streets and a heavy-handed response from the military and police.

Analysts are warning that Ethiopia could be destabilized by recurring cycles of violence unless there are urgent steps to defuse the crisis. The protests and the reaction from the authorities “have further inflamed an explosive situation,” according to a report by the International Crisis Group, an independent organization.

Elections had been scheduled for August, but Ethiopia’s Parliament decided last month to postpone the voting and extend its own term. Officially the move was a response to the COVID-19 pandemic, but it “stoked anger” among opposition parties, which felt excluded from the decision, the International Crisis Group said.

The latest clashes began with the assassination of popular musician Haacaaluu Hundeessaa by unknown gunmen in Addis Ababa last week. He was a former political prisoner who gained huge fame in Oromia, the country’s biggest region, for his songs that encouraged protesters to fight for greater rights for the Oromo people, who have long felt oppressed and marginalized from power.

His music helped fuel the anti-government protests that eventually propelled Mr. Abiy to office in 2018 in what was long an authoritarian country. Since then, Mr. Abiy has released political prisoners, negotiated a peace deal with former wartime enemy Eritrea and announced plans to liberalize the economy and the political system.

Mr. Abiy, Ethiopia’s first Oromo Prime Minister, has lifted the ban on opposition parties and restored other democratic freedoms over the past two years, but some Oromo nationalists have accused him of betraying their cause.

The assassination of Mr. Haacaaluu on June 29 sparked immediate protests and rioting in the capital, Addis Ababa, and quickly spread to towns in Oromia. Gangs of young men roamed the streets, armed with sticks, while many shops, homes and cars were attacked and burned or looted.

The government deployed police and military forces in the towns and cities, triggering deadly street battles and the arrest of more than 1,000 people over a period of several days.

After initially saying that about 80 people had been killed during the protests, the government on the weekend said the death toll had doubled to at least 166, including 145 civilians and 11 members of the security forces, while a further 167 people had suffered serious injuries.

It was the latest in a series of security crackdowns and inter-ethnic clashes that have killed hundreds and forced three million people from their homes over the past two years.

The government has shut down several television stations, arrested journalists and opposition members, and blocked access to the internet for the vast majority of Ethiopians – although some government offices were allowed to have access.

Amnesty International has called for an independent and impartial investigation into Mr. Haacaaluu’s slaying. Since 2019, there has been an increase in killings of people who have criticized the government, Amnesty said.

Military patrols have restored calm in the Ethiopian capital. But a leading opposition party, the Oromo Liberation Front, said on Monday that five of its senior members had been seized by security forces and taken into custody in unknown locations. This came after the arrest of several other prominent opposition figures last week.

The internet shutdown has made it difficult for human-rights groups to monitor the extent of the killings and arrests across Ethiopia.

“Rather than restoring calm, the authorities’ internet shutdown, apparent excessive use of force and arrest of political opposition figures could make a volatile situation even worse,” a report by Human Rights Watch said.

NetBlocks, a digital-rights group, said the use of internet shutdowns for political purposes has “intensified in severity and duration” during Mr. Abiy’s term in office, “despite the country’s rapid digitalization and growing reliance on cellular internet connectivity.” 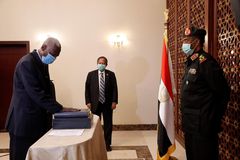 Thousands of migrants head back to Ethiopia after deportations as pandemic sparks fears
May 7, 2020 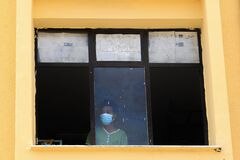