Russian lawmakers on Tuesday authorized President Vladimir Putin to use military force outside the country – a move that could presage a broader attack on Ukraine after the U.S. said an invasion was already underway there.

Several European leaders said Russian troops rolled into rebel-held areas in eastern Ukraine after Putin recognized their independence. But it was unclear how large the deployment was, and Ukraine and its Western allies have long said Russian troops were fighting in the region, allegations that Moscow always denied.

Members of Russia’s upper house, the Federation Council, voted unanimously to allow Putin to use military force outside the country – effectively formalizing a Russian military deployment to the rebel regions, where an eight-year conflict has killed nearly 14,000 people.

Shortly after, Putin laid out three conditions to end the crisis that has threatened to plunge Europe back into war, raising the specter of massive casualties, energy shortages across the continent and economic chaos around the globe.

Putin said the crisis could be resolved if Kyiv recognizes Russia’s sovereignty over Crimea, the Black Sea peninsula that Moscow annexed from Ukraine in 2014, renounces its bid to join NATO and partially demilitarizes. The West has decried the annexation of Crimea as a violation of international law and has previously flatly rejected permanently barring Ukraine from NATO.

Asked whether he has sent any Russian troops into Ukraine and how far they could go, Putin responded: “I haven’t said that the troops will go there right now.” He added coyly that “it’s impossible to forecast a specific pattern of action – it will depend on a concrete situation as it takes shape on the ground.”

With tensions rising and a broader conflict looking ever more likely, the White House began referring to the Russian deployments as an “invasion” after initially hesitating to use the term – a red line that President Joe Biden has said would result in the U.S. levying severe sanctions against Moscow. He scheduled an address for later Tuesday.

“We think this is, yes, the beginning of an invasion, Russia’s latest invasion into Ukraine,” said Jon Finer, principal deputy national security adviser, said on CNN. “An invasion is an invasion, and that is what is underway.”

The Biden administration’s rhetoric hardened considerably in less than 24 hours. The White House announced limited sanctions targeting the rebel-region Monday evening soon after Putin said he was sending troops to eastern Ukraine. A senior Biden administration official, who briefed reporters about the sanctions targeting the breakaway region, noted “that Russia has occupied these regions since 2014″ and that “Russian troops moving into Donbas would not itself be a new step.”

The administration initially resisted calling the deployment an invasion because the White House wanted to see what Russia was actually going to do. After assessing Russian troop movements, it became clear it was a new invasion, according to a U.S. official who spoke on the condition of anonymity to discuss internal deliberations.

For weeks, Western powers have been bracing for this as Russia massed an estimated 150,000 troops on three sides of neighbouring Ukraine – and promised swift and severe sanctions if it materialized. The European Union and Britain announced Tuesday that some of those measures were coming – and more were expected from the U.S., too.

Western leaders have long warned Moscow would look for cover to invade – and just such a pretext appeared to come Monday, when Putin recognized as independent two separatist regions in eastern Ukraine, where government troops have fought Russia-backed rebels. The Kremlin then raised the stakes further Tuesday, by saying that recognition extends even to the large parts now held by Ukrainian forces.

Putin said Russia has recognized the rebel regions’ independence in the borders that existed when they declared their independence in 2014 – broad territories that extend far beyond the areas now under separatist control and that include the major Azov Sea port of Mariupol. He added, however, that the rebels should eventually negotiate with Ukraine.

Condemnation from around the world was quick. Ukrainian President Volodymyr Zelenskyy said he would consider breaking diplomatic ties with Russia and Kyiv recalled its ambassador in Moscow.

But confusion over what exactly was happening in eastern Ukraine threatened to hobble a Western response. While Washington clearly called it an invasion, some other allies hedged. 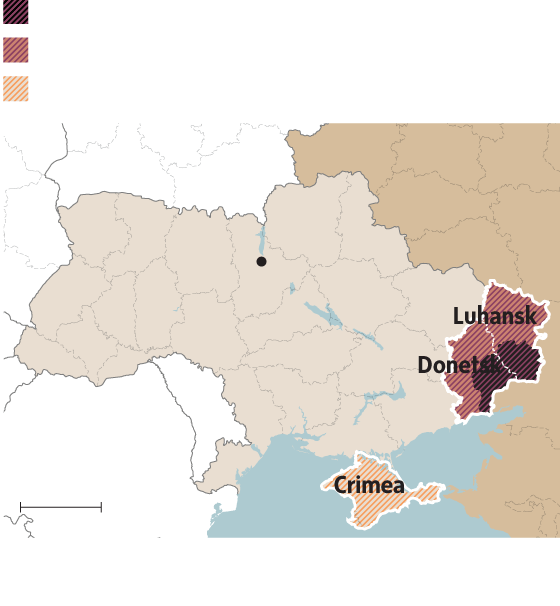 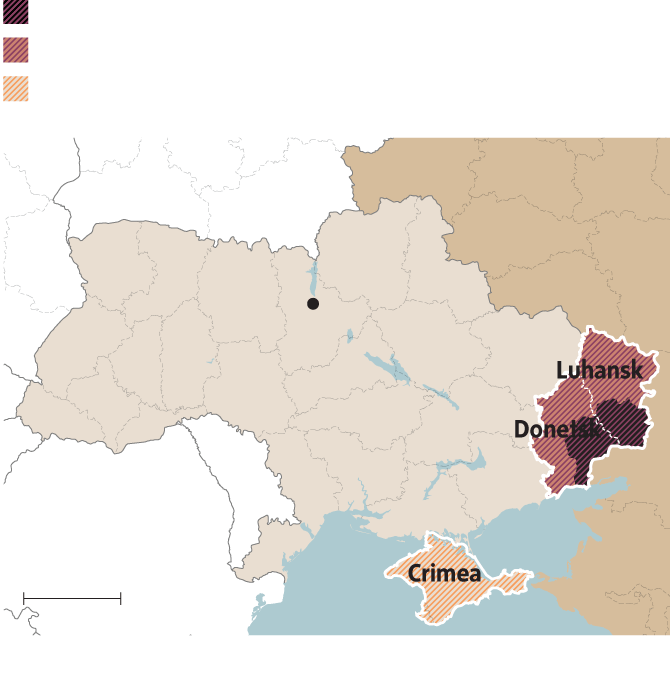 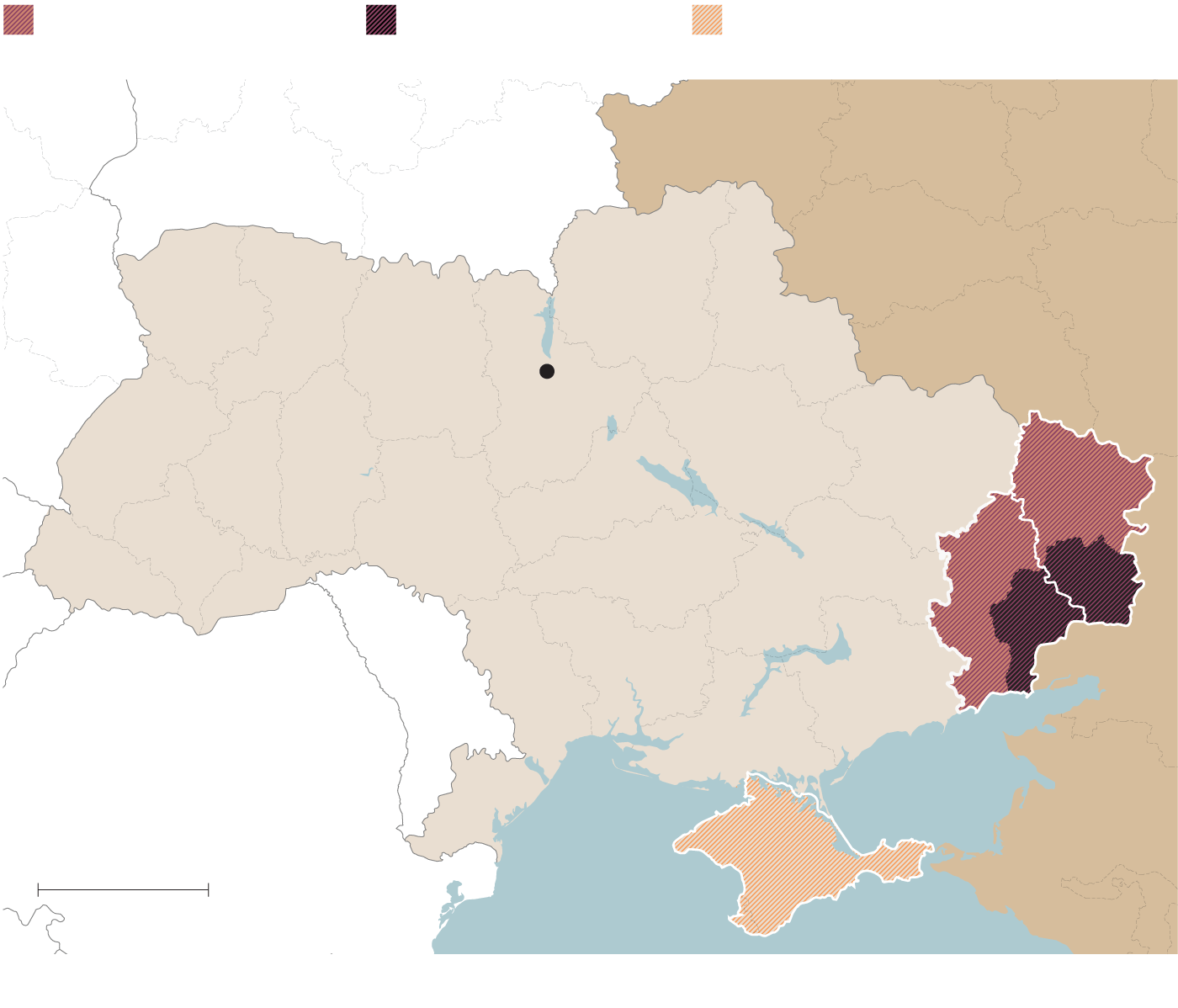 But he added: “I wouldn’t say that (it is) a fully fledged invasion, but Russian troops are on Ukrainian soil.”

Not all in Europe saw it that way. Spanish Foreign Minister Jose Manuel Albares noted “if Russia uses force against Ukraine, sanctions will be massive.”

The Kremlin hasn’t confirmed any troop deployments to the rebel east, saying it will depend on the security situation. Vladislav Brig, a member of the separatist local council in Donetsk, told reporters that the Russian troops already had moved in, but more senior rebel leaders didn’t confirm that. Late Monday, convoys of armoured vehicles were seen rolling across the separatist-controlled territories. It wasn’t immediately clear if they were Russian.

In response to the moves thus far, top EU officials said the bloc was prepared to impose sanctions on several Russian officials and banks financing the Russian armed forces and move to limit Moscow’s access to EU capital and financial markets. They gave few details.

EU foreign ministers met Tuesday to discuss the measures – but they did not appear to include the massive punishment repeatedly promised in case of a full-fledged invasion.

While he said that Russian tanks have already rolled into eastern Ukraine, he warned a full-scale offensive would bring “further powerful sanctions.”

The White House has also moved to respond, issuing an executive order to prohibit U.S. investment and trade in the separatist regions, and additional measures – likely sanctions – were to be announced Tuesday. Those sanctions are independent of what Washington has prepared in the event of a Russian invasion, according to a senior administration official who briefed reporters on the condition of anonymity.

The Russian moves also pushed Germany to suspend the certification process for Nord Stream 2 pipeline that was to bring natural gas from Russia. The pipeline was built to help Germany meet its energy needs, particularly as it switches off its last three nuclear power plants and phases out the use of coal, and it has resisted calls by the U.S. and others to halt the project.

Even as alarm spread across the globe, Zelenskyy sought to project calm, saying in an address overnight: “We are not afraid of anyone or anything. We don’t owe anyone anything. And we won’t give anything to anyone.”

His foreign minister, Dmytro Kuleba, is in Washington to meet with Secretary of State Antony Blinken, the State Department said.

Russia has long denied it has any plans to invade Ukraine, instead blaming the U.S. and its allies for the crisis and describing Ukraine’s bid to join NATO as an existential challenge to Russia. Putin reiterated those accusations in an hourlong televised speech on Monday, when he announced that Russia would recognize the rebels.

“Ukraine’s membership in NATO poses a direct threat to Russia’s security,” he said.

The Western rejection of Moscow’s demands gives Russia the right to take other steps to protect its security, Putin said.

The Russian Foreign Ministry said Tuesday it will evacuate its diplomatic personnel from Ukraine “in the nearest time,” pointing to attacks on diplomatic buildings, cars and physical threats against diplomats in the Ukrainian cities of Kyiv, Odesa, Lviv and Kharkiv.