Myanmar’s military-appointed foreign minister flew into Thailand on Wednesday, a Thai government source said, as Myanmar’s neighbours intensified efforts to resolve a crisis that began when its army seized power in a Feb. 1 coup.

The minister, Wunna Maung Lwin, arrived for talks on diplomatic efforts by the Association of South East Asian Nations (ASEAN), the Thai source said, as opponents of the coup again took to the streets in Myanmar.

Indonesia has taken the lead in efforts steer a path out of the crisis with the help of fellow ASEAN members but its plans appeared to falter earlier on Wednesday with the scrapping of a proposed trip to Myanmar by its foreign minister.

This week has seen huge rallies and a general strike to denounce the coup and demand the release of elected leader Aung San Suu Kyi, despite a warning from authorities that confrontation could get people killed.

Protesters from ethnic minorities rallied on Wednesday, together with staff from the energy ministry, as concern mounted about the economic impact of the protests and an associated civil disobedience campaign of strikes.

“It will only get back to normal when the military returns power to the winning party that we sincerely voted for.”

The crisis has restored Myanmar’s reputation as the problem member of the 10-country ASEAN.

Indonesia had this week proposed a plan centred on ASEAN members sending monitors to ensure the generals stick to their promise to hold fair elections, sources said.

The military has not given a time frame for a new election but it imposed a one-year state of emergency when it seized power so it would likely be after that.

But Suu Kyi’s party, which swept a Nov. 8 election that the military says was marred by fraud, and its supporters want its victory recognized.

Indonesia’s foreign minister, Retno Marsudi, who is in Thailand, had been expected to fly to Myanmar but the trip was off, her ministry said.

“After taking into account current developments and the input of other ASEAN countries, this is not the ideal time to conduct a visit,” Indonesian foreign ministry spokesman, Teuku Faizasyah, told a briefing in Jakarta.

On Tuesday, hundreds of protesters gathered outside Indonesia’s embassy in Yangon to oppose a new election, demanding that the votes they cast in November be recognized.

The army seized power after alleging fraud in the November elections, detaining Suu Kyi and much of the party leadership. The electoral commission dismissed the fraud complaints.

The Future Nation Alliance, a Myanmar-based activist group, said earlier in a statement a visit by Retno would be “tantamount to recognizing the military junta”.

The group demanded foreign officials meet Htin Lin Aung, a member of a committee representing ousted members of parliament - known by the initials CRPH - who has been appointed the “sole responsible official for foreign relations”.

Protesters in the second city of Mandalay marched on Wednesday holding up signs of support for the Committee Representing Pyidaungsu Hluttaw, or parliament.

A procession of elephants also marched in Mandalay, media reported.

Efforts by Myanmar’s neighbours to help it resolve the crisis comes as international concern is growing.

The Group of Seven (G7) rich nations on Tuesday condemned intimidation and oppression of those opposing the coup. “Anyone responding to peaceful protests with violence must be held to account,” group foreign ministers said in a statement.

Western nations sought to increase pressure on the junta this week with the European Union warning it was considering sanctions that would target businesses owned by the army.

The United States imposed sanctions on two more members of the junta and warned it could take more action.

Military chief General Min Aung Hlaing has called for state spending and imports to be cut and exports increased to revive what he called an ailing economy.

He did not link the protests to economic problems but said the authorities were following a democratic path in dealing with them and police were using minimal force, such as rubber bullets, state media reported.

Security forces have shown more restraint compared with earlier crackdowns against people who had pushed for democracy during almost half a century of direct military rule.

Even so, three protesters have been shot and killed. The army has said one policeman died of injuries sustained during the protests.

Myanmar military threatens to use force as protesters demonstrate against coup
February 22, 2021 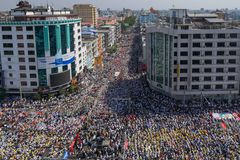 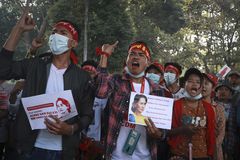 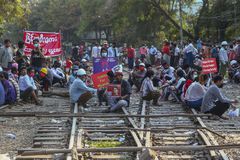