Of the millions of meetings that have taken place online this year because of the pandemic, this weekend’s virtual G20 summit has the potential to be one of the most awkward yet.

Any gathering hosted by Saudi Arabia – a country involved in a bloody war in neighbouring Yemen and in the midst of a harsh crackdown on women’s rights activists at home – is bound to be controversial.

The guest list is equally complicated. Turkish President Recep Tayyip Erdogan is still at odds with Riyadh over Mr. Khashoggi’s murder, which took place inside the Saudi consulate in Istanbul, while also trading insults with French President Emmanuel Macron over disagreements ranging from the war in Libya to the treatment of France’s Muslims.

Chinese President Xi Jinping stands accused of presiding over a system of forced indoctrination camps where hundreds of thousands of members his country’s Uyghur minority are being detained.

And then there’s U.S. President Donald Trump, who, as of Thursday, had yet to confirm his participation in the summit and still refuses to admit publicly that he lost the Nov. 3 election to president-elect Joe Biden.

The pandemic has killed more than 1.3 million people, and the world is sliding into the deepest recession since the Second World War. The virtual gathering of the leaders of the world’s most powerful economies is supposed to focus on both challenges at once, hoping an agreement can be reached on how to ensure the fast and fair distribution of vaccines, once they’re proven and available, as well as some framework for easing the economic pain.

In an open letter this week, United Nations Secretary-General Antonio Guterres called on G20 leaders to put their differences aside and focus on the massive challenges before them.

“As we tackle this unprecedented pandemic, the world needs unprecedented leadership that is united in its quest to respond to the crisis and recover better. The pandemic must be a wake-up call to all leaders that division is a danger to everyone.”

It was the G20 that led the way out of the last major financial crisis, as leaders gathered at the 2009 summit in London pledged a US$1.1-trillion cash injection that kick-started the global economy. Few expect such a rescue from the 2020 Riyadh summit – in large part because of who’s hosting and who’s attending.

The 2009 gathering was led by British Prime Minister Gordon Brown, who won acclaim for brokering the financial aid agreement. Newly elected U.S. President Barack Obama helped seal the deal with an impassioned speech calling for the world to come together.

It’s hard to imagine the same from the Saudi royals or Mr. Trump. If Mr. Trump does take part, there are concerns he will use his time at the digital podium to repeat his claim to have won the election rather than promote a coronavirus rescue package.

“Personalities matter a lot, and the particular configuration of them matters a lot,” said John Kirton, co-director of the G20 research group at the Munk School of Global Affairs and Public Policy.

Holding a summit online has benefits and disadvantages, Prof. Kirton said. The virtual nature of pandemic meetings allowed for an emergency leaders’ summit in March, during the first wave of the pandemic, and for more regular interaction between ministers and other officials than would have been possible with normal travel schedules. But it also means there won’t be the kind of face-to-face interaction that has led to breakthroughs at past meetings.

“The corridor conversations and coffee breaks – all of that is gone. It will turn the summit into a more scripted event, with no chance for spontaneous combustions,” Prof. Kirton said.

The virtual nature of the summit will also allow Prime Minister Justin Trudeau and other leaders to sidestep calls to either boycott the summit or find a more suitable host.

“This is a very shameful situation,” Mr. Khashoggi’s widow, Hatice Cengiz, told The Globe and Mail in a telephone interview from Berlin, where she made her boycott plea to the German parliament Thursday. “All the leaders around the world are behaving like nothing happened.”

In response to an e-mailed question about Mr. Trudeau’s participation in the summit, Grantly Franklin, a spokesperson for Global Affairs Canada, said “Canadian participation for the Leaders’ Summit … will be confirmed in the days leading up to the event.”

Mr. Franklin said the protection and promotion of human rights are “core to Canada’s foreign policy,” including in its dealings with Saudi Arabia, and that Canada condemned the killing of Mr. Khashoggi. “Those responsible for the killing must be held to account.”

Zeinab Abo al-Kheir, a Gatineau resident whose 55-year-old brother, Hussein, faces imminent execution in Saudi Arabia on drug charges, said she hoped Mr. Trudeau would use whatever remarks he delivers to the summit to call for an immediate amnesty for those on death row.

Ms. Abo al-Kheir said her brother, a Jordanian citizen who worked as a driver for a rich Saudi family, had no idea there were amphetamines hidden in the car when he was arrested in 2014. He confessed to possession charges after two weeks of torture. “People get their heads chopped off for nothing. [Saudi Arabia has] unfair trials, unfair courts. It’s a horrible system, especially if you’re not guilty and very poor. My brother has no lawyer, so he faced the court alone.”

When Joseph Stiglitz, a Nobel Prize-winning economist, spoke about the Khashoggi murder and the jailing of Saudi women’s rights activists during his remarks this week to Think20, a group that provides policy advice to the leaders’ summit, the broadcast was immediately censored.

Toronto police service says it regrets that mistakes were made during G20 summit in 2010
Subscriber content
October 19, 2020 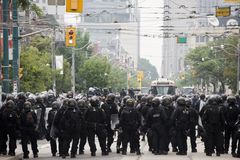