Lebanon’s prime minister-designate said Wednesday he wants to swiftly form a government of specialists committed to enacting urgent reforms in the crisis-stricken country that can regain the trust of the Lebanese and the international community.

Mustapha Adib, a 48-year-old diplomat, spoke to reporters after holding consultations with members of parliament over the formation of a new crisis Cabinet. He was hastily approved for the job of prime minister earlier this week, ahead of a two-day marathon visit by French President Emmanuel Macron that ended Tuesday night.

It was Macron’s second visit in less than a month as Lebanon faces multiple crises and challenges – including an unprecedented financial and economic meltdown and the aftermath of last month’s massive explosion in Beirut’s port that ripped through the capital.

The giant Aug. 4 explosion, caused by the ignition of nearly 3,000 tons of improperly stored ammonium nitrate, has resulted in intense pressure on Lebanon’s ruling elite, already blamed for driving the small country to the brink of total collapse. At least 190 people were killed and thousands were injured in the blast.

Speaking at the end of two days of meetings in Beirut, Macron said Lebanese politicians had committed to a road map that begins with the formation of a government within two weeks to enact reforms.

Failing to do that within a three-month period would result in punitive actions, including withholding vital international assistance and possibly even sanctions against politicians, he said.

On Wednesday, U.S. Secretary of State Mike Pompeo said the U.S. and France share the same objective and were in close communication.

“Business as usual in Lebanon just is unacceptable,” he told reporters at a State Department news conference in Washington.

“This has to be a government that conducts significant reforms, real change. … I think the French share that. I think the whole world, frankly, sees the risk,” he said.

Adib was Lebanon’s ambassador to Germany before he was called back abruptly for the prime minister job after Lebanese political parties reached a surprise agreement. He said Wednesday the government he seeks to form is one made up of experts.

“The government should be a government of specialists that deals quickly and professionally with the challenges ahead and works on regaining the trust of Lebanese people residing here as well as in the diaspora, and the trust of the Arab and international community,” he told reporters.

He refused to take any questions, saying “now is the time for working not for talking.”

Activists have rejected Adib, labelling him a consensus candidate by a corrupt class desperate to hang on to power. They say he cannot possibly form a government of independent experts. Unlike his predecessor, Hassan Diab, however, Adib got the backing of all major political factions on both sides of the Lebanese divide. He was nominated both by former Prime Minister Saad Hariri and other Sunni leaders, as well as by the Shiite Muslim Hezbollah party and its allies.

Diab’s government, which had the support of Hezbollah but lacked the crucial backing of the Sunni community, resigned under pressure in the wake of the Aug. 4 explosion. His government was seen as one-sided and was unable to make difficult decisions or implement any significant reforms. It was further set back by years of accumulated problems that came to a head late last year, and the coronavirus pandemic, which worsened the economic situation.

France and the international community have said they will not provide financial assistance to Lebanon unless it implements radical changes aimed at fighting the widespread corruption and mismanagement that has characterized governance here for decades.

Adib, a dual Lebanese-French citizen, promised to carry out the mission as he prepared to form a new Cabinet, saying he will work on reaching a bailout deal with the International Monetary Fund.

Humanitarian assistance has poured into Lebanon in the wake of the Beirut explosion, with most of it going directly to non-governmental organizations and other agencies, and bypassing authorities – a reflection of the lack of trust.

In an apparent snub to the ruling class, U.S. Assistant Secretary of State for Near Eastern Affairs David Schenker said Wednesday he will not meet with Lebanese politicians during a visit to Beirut on Wednesday, but would hold talks with civil society activists.

In an interview with the pan-Arab Saudi newspaper Asharq al-Awsat, Schenker said the new Lebanese government must believe in reforms and implement them.

“It will no longer be business as usual.” 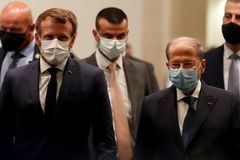 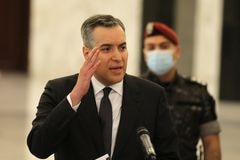 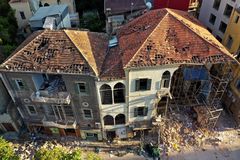