Lenora Lapidus, a lawyer with the American Civil Liberties Union, who expanded the organization’s fight for gender equality beyond the concerns of middle-class white women to include domestic workers, women in combat and others, died May 5 at her home in New York. She was 55.

Anthony D. Romero, executive director of the ACLU, said the cause was breast cancer.

For nearly two decades, Lapidus (pronounced LAP-uh-dus) led the ACLU’s Women’s Rights Project. The project, co-founded in 1972 by Ruth Bader Ginsburg, now an associate justice of the Supreme Court, became the major legal arm of the growing movement for gender equality and a powerful force in urging the courts to see women’s rights as civil rights, with the same constitutional protections.

Lapidus started as a summer intern for the Women’s Rights Project in 1988. After law school, she served as legal director of the ACLU of New Jersey. She had been director of the rights project since 2001.

At that time, the project was not engaged in active litigation, but that quickly changed under her leadership as she pursued a broad range of cases.

She fought sex trafficking of domestic workers and gender-based violence, which were not traditionally viewed as civil rights issues. This included challenging local ordinances that require a landlord to evict all members of a household – perpetrators as well as victims – if the police have been called repeatedly to settle domestic disputes.

“This puts victims in a terrible situation,” Lapidus said in January in an ACLU podcast about her work. “If they call the police, they risk being evicted.”

She created campaigns to inform farmworkers, food processing plant workers and nail salon workers about their rights under anti-discrimination laws, as well as occupational health and safety laws. She led litigation against Facebook for its algorithms that enabled employers to discriminate by gender in help-wanted ads; Facebook settled the case this year, agreeing to stop such sex-based ad targeting.

She also helped challenge the U.S. military’s ban on women serving in combat. After an ACLU lawsuit was filed in 2012 saying the ban violated women’s right to equal protection, the ban was lifted.

“She had an expansive vision of what the struggle for women’s rights should be,” Romero said in a telephone interview. “From custodians to nail salon workers to women in combat roles, she understood that the women’s movement needed to be broader than the focus on white-collar professional women.”

For this reason, he said, he liked to say that Lapidus “renovated the house that Ruth built.”

When Lapidus became director of the Women’s Rights Project, she met with Ginsburg. She said Ginsburg told her that while the ACLU had made a lot of progress for women in the workplace, it had been less successful in getting men to play an equal role at home.

In that spirit, the ACLU filed a complaint against J.P. Morgan Chase in 2017 saying it discriminated against new fathers by providing 16 weeks of paid parental leave for new mothers but only two weeks for new fathers. (The case has yet to be resolved.)

Just as Ginsburg had shown in her own legal career, Lapidus saw that using men as plaintiffs in such cases benefited both men and women. If parental leave is unequal, she said, employers will think that caring for a newborn is women’s work, “which hurts women because employers feel it’s a burden to have women – they won’t hire or promote them.”

“Women’s rights have always been a driving force for me,” Lapidus said in the January podcast. She said she saw her mother as “a successful career-oriented woman” and yet she could not get a credit card in her own name.

Lapidus went to Cornell, majoring in anthropology and minoring in women’s studies. She graduated in 1985. She went on to Harvard Law School, graduating in 1990.

In 1993 she married Matthew Bialer. He survives her, as does their daughter, Isabel Bialer Lapidus; a brother, Kyle Lapidus; and a sister, Jesse Wind.

At the Women’s Rights Project, Lapidus helped break new ground with what she called “21st-century cases,” those that resulted from advances in technology that would have been unimaginable in earlier days.

One of her most significant cases involved a challenge to a bio-tech company, Myriad Genetics, which had developed a test for mutations in two genes that could indicate a heightened risk of breast and ovarian cancer. The company had been granted patents on those genes, enabling it to monopolize the testing.

The ACLU was divided about whether to join the case. Some feared that challenging the patents would impede other scientific research on other issues important to women. But Lapidus argued that the ACLU had an obligation to fight any practice that inhibited treatment for these diseases, and her view prevailed.

The ACLU then joined coalition of medical groups challenging the patents in court. They argued, in Association for Molecular Pathology v. Myriad Genetics, that a part of the human body could not be patented and that Myriad’s monopoly was stifling research, inflating the cost of the test and preventing many women from being tested.

The U.S. Supreme Court agreed, ruling unanimously in a landmark decision in 2013 that human genes, as opposed to those created synthetically, could not be patented. It was a resounding victory for the medical groups that brought the case and for the Women’s Rights Project, which helped litigate it.

Becoming director of the project, Lapidus had often said, had always been her goal.

“And,” she added, “I’m just thrilled that I’ve been able to actually live the life I was dreaming of living.”

Charges laid against man, woman in Edmonton after investigation into human trafficking
May 10, 2019 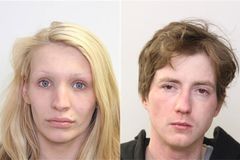