Libyan fighters allied with the country’s UN-supported government in Tripoli pressed their advance on Monday, boosted by recent battlefield gains and their rivals’ withdrawal from around the capital, the warring sides reported.

The push came despite a unilateral ceasefire proposal on the weekend by Egypt, a backer of the rival Libyan forces commanded by General Khalifa Haftar, who has waged a year-long campaign trying to capture the capital.

The Tripoli forces, backed by Turkey, gained the upper hand last week, after retaking the capital’s airport, all main entrance and exit points to the city and a string of key towns near Tripoli, forcing Gen. Haftar’s fighters to withdraw – defeats their command painted as a tactical measure to give the UN-backed peace process a chance.

But the militias fighting to defend Tripoli rejected the proposal, instead pushing eastward toward the coastal city of Sirte, a former stronghold of the Islamic State group that Gen. Haftar’s forces captured in January.

In a press conference Monday, Gen. Haftar’s spokesman, Ahmed al-Mismari, said that his forces have stepped up air strikes against the Tripoli militias in response, “and we will not stop until they commit fully to the [ceasefire] initiative or are completely removed.”

Tripoli-based Interior Minister Fathi Bashagha said the government side would engage in political talks only after taking Sirte and also the inland al-Jufra Airbase, to the south. The United States last month accused Russia of deploying at least 14 aircraft at the base to support Russian mercenaries backing Gen. Haftar, a claim dismissed by Moscow.

Taking Sirte would open the gate for the Tripoli-allied militias to press even farther eastward, to potentially seize control of vital oil installations, terminals and oil fields that tribes allied with Gen. Haftar shut down earlier this year, cutting off Libya’s major source of income.

Jalel Harchaoui, a research fellow specializing in Libyan affairs at the Clingendael Netherlands Institute of International Relations, said the Tripoli forces were unlikely to stop at Sirte.

“Now what do you have right to the east of Sirte, you have the most strategic area of Libya,” Dr. Harchaoui said, “you have effectively a series of oil terminals capable of exporting everyday more than 6,000 barrels a day.”

Libya’s national oil company meanwhile said Sunday it has resumed production at the country’s largest oil field, after negotiations with the tribes. The National Oil Corp. (NOC) said the first production phase at the el-Sharara oil field, about 900 kilometres south of Tripoli, would start at a capacity of 30,000 barrels a day, and the field is expected to return to full capacity, around 290,000 barrels a day, within three months.

The NOC said production also resumed at the el-Feel oil field in the country’s southwest. It said the force majeure that was in place in the two fields for months was lifted. A force majeure, meaning superior force, is a contract clause that frees a party from liability whenever an extraordinary event or circumstance beyond the party’s control takes place.

Allowing the Tripoli-based company to resume oil production could be seen an olive branch to the government in the Libyan capital, which suffered heavy financial losses, estimated at about US$5.2-billion, since closing.

Libya’s Prime Minister Fayez al-Sarraj urged the Tripoli fighters to “continue their path” toward Sirte, according to a statement posted by Mohamed Gnono, a spokesman for the Tripoli-allied forces. Mr. Gnono posted footage of allegedly captured tanks and vehicles in the outskirts of Sirte.

Gen. Haftar’s military media unit, however, said his forces destroyed a military company that included Turkish-made Hausers and tanks, along with a bus allegedly carrying Turkish troops and Syrian mercenaries who have been aiding the Tripoli militias.

Two Sirte residents said shelling by Tripoli militias earlier Monday killed at least eight civilians and wounded six others in the town of Thalatheen, around 30 kilometres west of Sirte. The residents spoke condition of anonymity because of fear of reprisals. There was no immediate comment from the Tripoli militias.

The push on Sirte shows the Tripoli-based government and its main backer, Turkey, are eager to build on their recent victories.

Libya’s eastern-based forces are backed by the United Arab Emirates and Egypt, as well as France and Russia. The Tripoli-based government receives aid from Qatar, Italy and Turkey, which stepped up its military support in recent months, helping shift the tide of the conflict.

The Kremlin said President Vladimir Putin hailed the Egyptian peace initiative in a phone call Monday with Mr. el-Sisi. The two leaders reaffirmed their “shared intention to co-ordinate their efforts in order to end hostilities as quickly as possible and launch the Libyan talks under the UN aegis.”

“We hope that the authorities in Tripoli will promptly and with due attention take note of the peaceful call from Cairo and will respond to it in a constructive way,” the Russian statement added.

Sirte was the hometown of Libya’s former dictator Moammar Gadhafi, killed in the 2011 uprising. The city was later controlled by Islamic militants who pledged allegiance to IS, until they were defeated in 2016.

But Libya’s turmoil continued, and the oil-rich country has since been divided between rival administrations in the east and west, each is backed by foreign countries. 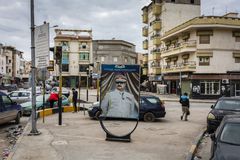 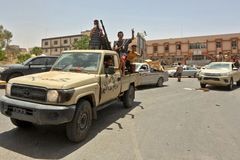 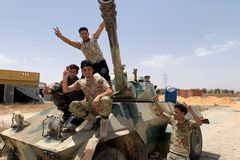