Desperate farmers in Kenya are beating drums and burning pepper in frantic attempts to protect their crops and pastures from enormous swarms of ravenous desert locusts, some blanketing as much as 2,400 square kilometres of land, in the country’s worst locust invasion in 70 years.

The infestation, believed to be linked to climate change, has already devastated regions of three African countries and three Middle Eastern countries. In coming months it could spread to several more countries, expanding as much as 500 times by June if left unchecked, United Nations experts say.

Many African countries are already suffering from droughts and floods – sometimes simultaneously in the same country. Locusts of almost biblical proportions are the latest threat to impoverished farmers who have been pushed to the brink by recent climate-related disasters.

“Our staff in Kenya are battling swarms so thick they can barely see through them,” said Bill Chambers, president and CEO of humanitarian organization Save the Children Canada.

“We are very concerned that this will place vulnerable girls and boys even closer to starvation,” he said in a statement. “The erratic weather of 2019 and the decade prior has already severely eroded the capacity of families to bounce back from unexpected crises.” 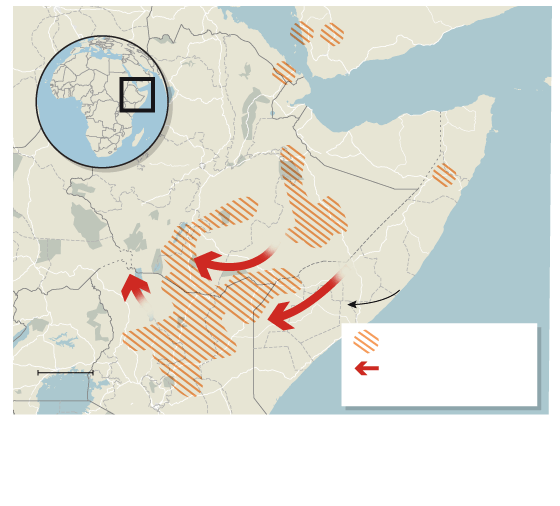 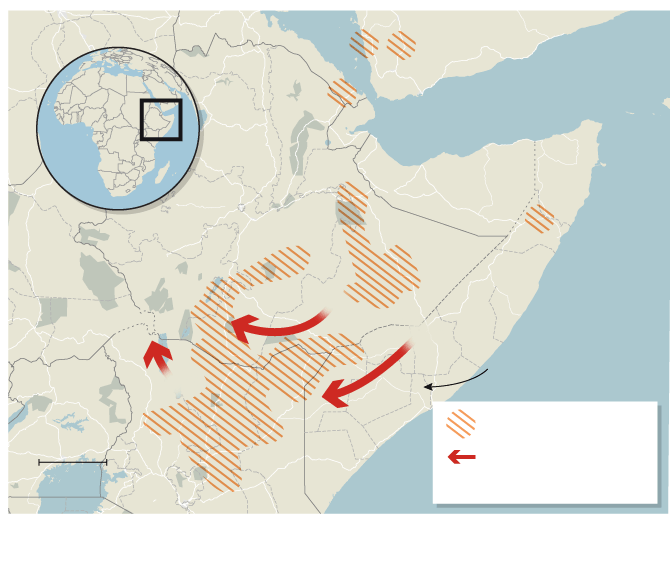 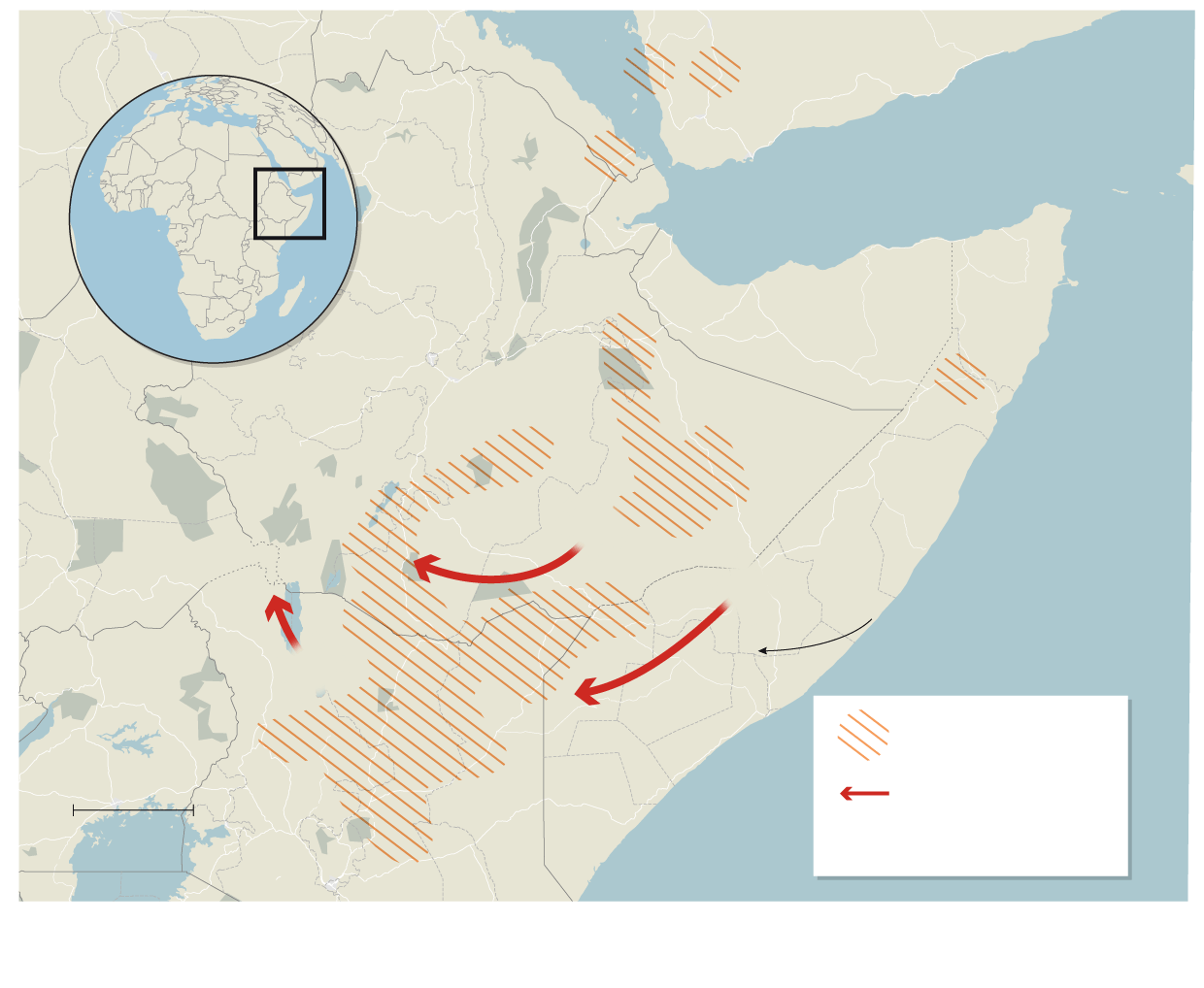 Kenya is battling the locusts with six airplanes conducting aerial spraying, but its officials say the planes are losing the fight against the growing swarms. The UN food and agriculture agency is holding a donor conference on Thursday in Rome, aiming to raise about US$70-million to combat the crisis.

The locusts have swept through regions of Ethiopia, Somalia and Kenya in recent weeks, after earlier affecting parts of Yemen, Iran and Saudi Arabia. Some swarms are heading towards Uganda and South Sudan, which are seen as the most likely to suffer the next invasions. Another generation of breeding has begun, and new swarms could emerge by April.

A single locust can travel 150 kilometres and eat its own weight in food each day, about two grams. A small swarm of 40 to 80 million locusts, covering a square kilometre, can consume as much food as 35,000 people in a day.

The biggest swarm in northeastern Kenya covers an area of 60 kilometres by 40 kilometres – three times as big as Toronto – and could hold as many as 190 billion locusts, consuming as much food daily as 90 million people.

Although locust plagues have occurred throughout history, scientists say the latest swarms in the Horn of Africa have been heightened by the effects of climate change, which produced rapidly warming waters in the Indian Ocean near the African coast. This has led to some of the heaviest rains in decades.

The warmer temperatures and heavy rainfall have created ideal conditions for locusts to breed, according to Shoki Al-Dobai, team leader for locusts and trans-boundary pests at the UN’s Food and Agriculture Organization (FAO).

Female locusts lay their eggs in soil; soil made soft by moisture is ideal for the hatching of nymphs, also known as hoppers. Moisture from rain also increases vegetation, their food source after they become winged adults. Locusts live for three to five months.

“The current desert locust situation remains extremely alarming and represents an unprecedented threat to food security and livelihoods in the Horn of Africa,” the FAO said in its latest bulletin on Tuesday.

The FAO considers the locust infestation a serious threat to food security, one that could lead to hunger if the massive swarms of desert locusts multiply.

“They are eating all the plants,” Mr. Al-Dobai said in an interview in Rome on Tuesday. “If we don’t intervene quickly, the locusts could impact food security.”

Mr. Shoki said that FAO expects the locust plague to last until June, depending on the amounts of rainfall. The goal is to control the swarms through the spraying of pesticides from airplanes, trucks and by hand. The pesticides are mainly organophosphate chemicals applied in ultra-low volumes.

The problem is that East Africa lacks enough aerial spraying equipment, and the pesticides themselves, to make a dent in the locust populations. Kenyan officials have reported that they are already facing shortages of the pesticides needed to combat the locust swarms.

The UN humanitarian chief, Mark Lowcock, has warned of “horrendous consequences” in East Africa if the locusts continue to spread. The locusts are “starting to destroy vegetation across East Africa with alarming speed and ferocity,” he said in a statement.

“Vulnerable families that were already dealing with food shortages now face the prospect of watching as their crops are destroyed before their eyes. A swift and determined response to contain it is essential.”

He said the locust outbreak is the worst of its kind in 25 years for Ethiopia and Somalia, and the worst in 70 years in Kenya.