The main insurgent group in the Syrian province of Idlib pulled out of a key rebel town as government forces advanced in the area on Tuesday amid intense bombardment and air strikes, a militant group and opposition activists said.

As the militants withdrew, government troops moved into northern and western neighbourhoods of Khan Sheikhoun, marking a significant gain for President Bashar Assad’s forces as they try to chip away at territory controlled by the opposition in Idlib. The northwestern province, dominated by an al-Qaeda-linked faction, is the last major rebel-held bastion in Syria.

Hayat Tahrir al-Sham, Syria’s main al-Qaeda-linked faction, said in a statement that its fighters carried out “a redeployment,” withdrawing to areas south of the town of Khan Sheikhoun. From there, they would continue to defend the territory, it said.

There was no immediate word from the Syrian government. But state TV said Syrian troops have expanded their presence in the Khan Sheikhoun area, without giving further details.

The withdrawal is a blow to the opposition. Syrian government forces have been on the offensive in Idlib and northern parts of Hama province since April 30, forcing nearly half a million people to flee to safer areas further north. The fighting also killed more than 2,000 people, including hundreds of civilians.

After months of intense bombardment, the insurgents’ defences appear to be crumbling as they are now losing ground at a much faster pace compared with the first three months of the government push.

In the long-running Syrian civil war, now in its ninth year, the northwestern region – where Turkish, Russian, U.S. and Iranian interests are at stake – has taken centre stage in the conflict.

The latest government gains come as NATO allies Turkey and the U.S. are discussing setting up a buffer inside Syria – one that Ankara wants to push Syrian Kurdish fighters it considers terrorists further to the east.

There has been speculation, meanwhile, that Russia and Turkey, which back rival sides in Syria’s conflict, have reached an agreement that would allow the Syrian army to retake parts of Idlib and reopen a highway that links the capital, Damascus, with the northern city of Aleppo, Syria’s largest.

Khan Sheikhoun, which had been held by militants since 2014, sits on that highway.

After the capture of Khan Sheikhoun, Syrian troops are likely now to move north toward Maaret al-Numan, another town on the highway that has been subjected to intense air strikes over the past days. Opposition activists also reported intense bombardment on the rebel-held town of Jisr al-Shughour on the southwestern edge of Idlib on Tuesday.

Backed by Russian air power, Syrian were able to enter parts of Khan Sheikhoun overnight, according to opposition activists, and are now clearing the area abandoned by militants of explosives and booby traps.

“After fierce bombardment by the criminal enemy that avoids direct confrontation with holy warriors by implementing a scorched earth policy, our fighters have redeployed south of Khan Sheihoun,” the statement said.

The Britain-based Syrian Observatory for Human Rights, an opposition war monitor, said the al-Qaeda-linked Hayat Tahrir al-Sham and other insurgent groups withdrew from Khan Sheikhoun as well as the towns and villages south of the town.

According to the Observatory, Khan Sheikhoun was home to about 1 million people, nearly 700,000 of them displaced by fighting in other parts of the country, before the government offensive began in April. In recent days hundreds of civilians remained in the town according to the group that tracks Syria’s war, now in its ninth year.

The Syrian Response Coordination Group, a relief group active in northwestern Syria, called on Tuesday for a “humanitarian truce” to allow civilians who are stuck in the areas of fighting to leave. The group said in a statement the Russia and Syrian governments “are practising terrorism against civilians” in violation of international laws.

Khan Sheikhoun was a stronghold of the al-Qaeda-linked militant faction, the most powerful group in rebel-held areas in Syria. The town was also the scene of a chemical attack on April 4, 2017 that killed 89 people.

At the time, the United States, Britain and France pointed a finger at the Syrian government, saying their experts had found that nerve agents were used in the attack. Days later, the U.S. fired 59 U.S. Tomahawk missiles at the Shayrat Air Base in central Syria, saying the attack on Khan Sheikhoun was launched from the base.

The Syrian government and its Russian allies denied there was a chemical attack. 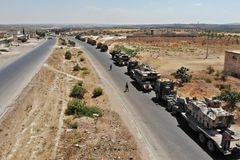