It was after midnight and the slow train from Chengdu was nearing the end of its 30-hour journey when Ms. Yang decided to make a run for it. She was headed to Beijing to join a protest, but it was becoming clear that the authorities were closing in. Early in the trip, relatives called to say police had come looking for her. Then, a railway worker arrived at her sleeper car bunk, saying he had been instructed to locate her.

Worried, Ms. Yang, who asked that only her surname be used for fear of retribution, took to WeChat, the Chinese messaging app, to ask other protesters what to do. They suggested she find another way to Beijing, where organizers expected 10,000 people to gather in the financial district on Monday to demonstrate over lost investments with peer-to-peer lending firms. Many of these firms have failed in recent months – some after a government crackdown on financial risk. Ms. Yang is unemployed and has lost $21,000, her family’s entire savings. She does not know how she will make her next mortgage payment.

At 1:59 a.m. on Monday, the train pulled into a station at Shijiazhuang, roughly 250 kilometres from Beijing. Ms. Yang prepared to step off. But by the time the train stopped, a police officer from Beijing was already there, waiting. Ms. Yang said that she suspected police were monitoring her WeChat so they knew what she was planning to do. She was taken away, screaming and crying.

The demonstration was set to begin at 8:30 a.m. in Beijing at the headquarters of the China Banking Regulatory Commission. But virtually no protesters had materialized. It was a mess, one organizer said.

For Chinese authorities, however, it was a stunning success, a breathtaking demonstration of the power Beijing wields to disrupt protest.

“It is crystal clear that the Chinese government is cautious about any attempt taken by citizens to express their own minds,” said Hu Jia, one of China’s best-known activists. “Once Beijing sees the possibility of an on-street protest or crowd gathering, which are generally called ‘instability factors,’ it will immediately resort to force to stop it.”

The first goal, typically, is “to contain the protesters, which means not allowing them to arrive at scene.”

This week, that meant dispatching police across the country to follow and detain people who planned to protest, many of whom had joined social-media groups with others angry over their lost investments. But the ability of Chinese authorities to peer into those same digital networks has also enabled a “remarkable” effectiveness by the state to control behaviour it considers threatening, said Chen Xi, a scholar at the Chinese University of Hong Kong who is the author of Social Protest and Contentious Authoritarianism in China.

“People are so dependent on WeChat for their co-ordination – so the government has actually benefited from this because the surveillance is so complete,” he said.

Nine-hundred kilometres from Beijing in the central Chinese city of Xi’an, the police response began five days before the scheduled protest, when an officer phoned Ms. Zhao, who spoke on condition only her surname be used. The officer invited her to make a criminal report of her financial grievance. The next morning, a more senior officer called to suggest the same. That afternoon, a person introduced as a police chief rang. Ms. Zhao said all of them claimed to be concerned about her peer-to-peer case.

But when she eventually went to the police station, she found no interest in hearing about peer-to-peer lending. She was told, instead, that police had evidence against her that could land her in prison. She was ordered to write a letter, dictated by station staff, in which she pledged not to travel to Beijing, promised to never report her situation to her local government and vowed to use only what they called legal and reasonable ways to defend her rights.

Police told her it is illegal to take part in an assembly or protest without official approval.

But protests are nonetheless commonplace in modern China. Authorities tacitly allow many smaller-scale protests as they work to resolve problems; one Chinese scholar calculated the number of demonstrations and riots at 500 a day in 2010, and “we still see protests by workers on a daily basis on a wide range of issues. In the vast majority of cases they just go ahead without any interruption,” said Geoffrey Crothall, spokesman for China Labour Bulletin, a Hong Kong-based group that tracks worker actions in China.

In recent years, however, labour protests have tended "to be much more small scale, usually only involving a few dozen workers,” Mr. Crothall said. “We could perhaps argue that that is a reflection of the government’s ability to snuff out major protests.”

Indeed, anger over failed peer-to-peer investments risks embroiling large numbers of people. Roughly 50 million Chinese investors have put money into the local industry, which is worth $250-billion. But more than 100 peer-to-peer firms collapsed in July alone. Chinese authorities are “extremely nervous and scared about protests in which many ordinary people’s interests are involved,” Mr. Hu said.

Whatever the case, authorities on Monday took no chances. In Beijing, police in blue uniforms and black-clad special service officers stood in large clusters at every intersection on roads stretching more than a kilometre to the south and hundreds of metres to the north of the China Banking Regulatory Commission headquarters. To the west, officers stood at each entry point to the city’s financial district. They searched bags and swiped national identification cards of everyone attempting to pass through.

Nearby streets were jammed with parked city buses. Some were filled with resting police. Others waited to ferry away protesters, a small number of whom were taken to local schools and stadiums.

But the great majority of the buses sat empty, as people such as Ms. Yang remained far from the capital. In Shijiazhuang, police handed her to three men from a local transport company, who placed her in the back of a van and drove her back home.

She is almost certainly on a blacklist that will bar her from future travel to Beijing. And being chased down by the police has made her lose the appetite for high-profile demonstration. She plans instead to use what she describes as more reasonable waysto seek redress in the future.

With a file from Alexandra Li 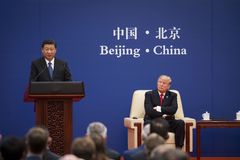 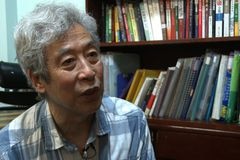