Maria Ressa slowly rhymes off the number of times she has been arrested, detained, charged and investigated by government officials in the Philippines because of her work as a journalist.

“I was arrested twice in a five-week period and I posted bail eight times in a three-month period,” Ms. Ressa said, adding that she has spent around US$100,000 on bail. She’s currently facing more than a dozen lawsuits and investigations by various government agencies and every time she leaves the country she has to check in with authorities. “I know first hand the abuse of power,” she added with a wry smile.

Ms. Ressa, 55, runs a news website in the Philippines called Rappler, which she launched in 2012 after years of working at various media outlets across Asia including U.S. broadcaster CNN. She’s in London this week to speak at a Global Conference on Media Freedom, which begins on Wednesday and is co-hosted by Canada and Britain. Just to get here, Ms. Ressa had to post a US$12,400 bond with Philippine government officials and provide details of her travel itinerary.

For someone facing 12 years or more in jail and possible financial ruin, Ms. Ressa is surprisingly upbeat. She has an easy smile and provides thoughtful answers, frequently sharing information on her laptop to back up a point. She has no husband or children, which she said makes the battle with the government somewhat easier although she frets about the future of Rappler’s 100-strong newsroom.

The diminutive journalist has become a leading figure in the fight for a free press and her cause has been taken up by international human-rights lawyer Amal Clooney, who has joined Ms. Ressa’s legal team. “Journalism is under attack," Ms. Ressa said bluntly. "This a transformative time. It’s an existential moment. Not just for journalism but for democracy.”

Ms. Ressa said Rappler is a prime example of what can happen when authoritarian leaders use disinformation and legal tactics to stifle a free press. The news site had little trouble with the government until shortly after Rodrigo Duterte was elected president in 2016. He promised a crackdown on crime and launched a brutal drug war that has killed more than 5,000 people. Rappler quickly became a thorn in the President’s side thanks to its unflinching coverage of death squads, corruption and how pro-government disinformation was being spread through social media.

The stories won Rappler a host of international media awards and Ms. Ressa was among a small group of journalists named “Person of the Year” by Time magazine in 2018. But in the Philippines, Mr. Duterte began denouncing the website in speeches as “fake news” and last year he banned Rappler journalists from his events. Government agencies went further and soon investigations were launched into Rappler’s media licence, ownership structure and taxes. A “cyberlibel” case was filed against Ms. Ressa for an article about a businessman with ties to the President, even though the story ran in 2012, months before the law had been adopted.

The government and Mr. Duterte have insisted that there has been no political interference in the investigations and that the country enjoys a free press. But Ms. Ressa said the tactics are all about intimidation and an attempt to put the website out of business. Other news organizations have faced similar challenges, she added. Government officials have targeted the owners of one major newspaper, which is now up for sale, and Mr. Duterte has threatened to revoke the broadcast licence of the country largest TV channel. “We weren’t the first news group that was targeted but we were the first to truly fight back,” she said.

The crackdown has taken a toll. Rappler’s advertising revenue plunged about 49 per cent at one point last year. But Ms. Ressa has managed to find alternative sources of revenue and secure grants from international groups such as Luminate, a charitable foundation created by eBay founder Pierre Omidyar. She also avoided job cuts by slashing the salaries of senior managers, including herself.

Ms. Ressa cites social-media giants such as Google and Facebook as the real threats to media freedom because they’ve provided an accelerant for populism to take hold across Europe and Asia. “Part of the reason so many democracies around the world are sick; why we’ve seen an erosion of freedom; why more populist leaders are being elected, is because of the disinformation that has seeped into the system,” she said. “Lies laced with anger and hate are spreading faster than fact. In the short term, the only people who can fix the immediate problem are the social media platforms.”

She’s joined a call by Luminate for technology companies to contribute to a US$1-billion global fund that would support investigation journalism and media development around the world.

The British government has invited officials from the Philippines to attend this week’s conference where participants will be asked to announce how they will promote media freedom. It’s not clear if anyone from the government will attend, but representatives from more than 100 other countries are expected.

Ms. Ressa said the fact that the conference is even being held is progress. The global attention Rappler has received has also helped highlight the problems of media freedom across the global south, a part of the world often ignored by Western governments and corporations. “We don’t usually have a seat at the table but in a strange way now, because we’ve come under attack, we now have a seat at the table,” she said, observing that she’s now working with Facebook in the Philippines. “I’m optimistic that we’ll create something at a time when it matters." 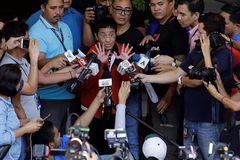 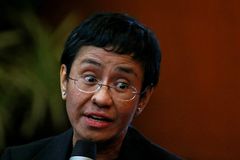 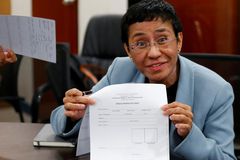