Italy will push ahead with plans to make vaccines mandatory unless millions more Italians, some of them vaccine skeptics, receive their shots in the next few weeks.

If the coalition government makes good on its strategy, Italy would become the first European Union country to make COVID-19 vaccines mandatory for eligible citizens – those over the age of 12.

The strategy is part of Prime Minister Mario Draghi’s plans to protect the vulnerable and allow the EU’s third-largest economy, which was the original epicentre of the European pandemic, to reopen fully and avoid distance learning for students. Many of the country’s largest employers are demanding compulsory jabs.

Alberta’s use of British COVID-19 data was a miscalculation

But the strategy presents legal complications and has triggered protests and death threats against government and health officials from Italy’s small but determined contingent of vaccine hesitant citizens. “Mandatory vaccines are a highly divisive issue,” said Francesco Galietti, chief executive of Policy Sonar, a Rome political consultancy. “I don’t think we are there yet on compulsory shots.”

Mr. Draghi, the former European Central Bank president, was recruited by Italian President Sergio Mattarella in February to lead a national unity government that would focus on ending the pandemic and the deep recession that it triggered. A comprehensive vaccine strategy was the centrepiece of his plan and, after a slow start, Italy now has one of the world’s highest vaccination rates.

Last week, Mr. Draghi said all eligible Italians could soon be required to receive one of the four vaccines in use in the EU. On Sunday, Renato Brunetta, Minister of Public Administration, said the government will try to pass a mandatory-vaccine law unless the vaccination level reaches 80 per cent to 90 per cent.

On the same day, Mr. Mattarella made fresh calls for the holdouts to get vaccinated. “Don’t invoke ‘liberty’ in order to avoid getting vaccinated because this call is the equivalent of a request to put others’ health at risk and, in some cases, to put others’ lives at risk,” he said during an appearance at the University of Pavia.

Making vaccines obligatory would require European and Italian medical regulators to give full approval for the vaccines in use. Currently, they are classified as emergency medicines with conditional approval.

About 70.5 per cent of eligible Italians had been fully vaccinated by the start of September. At the moment, vaccines are mandatory only for medical workers, as they are in France, although some other professions are almost fully vaccinated. At last count, more than 91 per cent of Italian teachers had received at least one jab of a two-shot vaccine, or the Johnson & Johnson shot, which does not require two jabs. Teachers must prove they are vaccinated, have tested negative or have recovered from COVID-19, meaning they carry antibodies.

But roughly 3.7 million Italians over the age of 50 have yet to be vaccinated, according to a report released Friday by Emergency Commissioner Francesco Figliuolo. In response, the government has been broadening the list of activities for which vaccinations or recent negative COVID-19 tests are required. The “green passes” are now needed for indoor dining at restaurants, to visit museums and cinemas, and to board long-distance trains and domestic flights.

The right-wing, populist parties in parliament, notably the League, led by Matteo Salvini, and the Brothers of Italy, led by the increasingly popular Giorgia Meloni, oppose mandatory vaccines on liberty and sovereignty grounds. “It’s not about their medical or scientific beliefs,” Policy Sonar’s Mr. Galietti said. “They need an enemy.”

The campaign to make vaccines mandatory has enraged some vaccine-hesitant citizens. Last week, prosecutors in the northern city of Turin launched an investigation into a vaccine-hesitant group on the Telegram chat network, where some members had posted death threats against Foreign Minister Luigi Di Maio, a key supporter of the government’s vaccine push.

“Another rat to be executed,” one of the messages said.

The Italian news agency ANSA reported that Matteo Bassetti, a high-profile infectious diseases doctor at Genoa’s San Martino Hospital, was accosted by a man who shouted at him, “You’re going to kill all of us with these vaccines and we’re going to make you pay.”

Police said the man was one of eight people who had made threats against Mr. Bassetti in recent months. In Rome, a video journalist for La Repubblica, one of Italy’s biggest daily newspapers, was punched by an anti-green pass protestor outside the Ministry of Education. 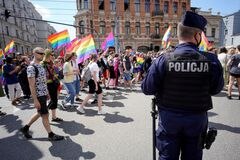 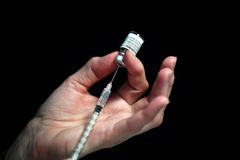 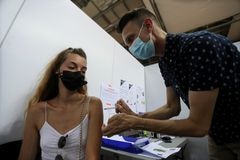