After months of doggedly pursuing a deeply unpopular Brexit strategy, British Prime Minister Theresa May has reached out to the opposition and opened the door to a much softer break with the European Union.

“This debate, this division, cannot drag on much longer,” Ms. May said in a televised address from her Downing Street office on Tuesday after an eight-hour cabinet meeting. “It is putting Members of Parliament and everyone else under immense pressure – and it is doing damage to our politics.”

Ms. May offered to work with Labour Party leader Jeremy Corbyn to find a way out of the Brexit impasse, which has seen MPs reject her withdrawal agreement three times but also fail to settle on an alternative. The two will “try to agree a plan – that we would both stick to – to ensure that we leave the European Union and that we do so with a deal,” she said. If they can’t reach an agreement, Ms. May said she would let MPs vote on a range of options and abide by their choice.

It’s not clear when Ms. May and Mr. Corbyn will meet, but to accommodate the new round of discussions Ms. May said she would seek an extension to the current April 12 deadline for Britain to leave the EU. She didn’t specific the length of the delay, but said she did not want the United Kingdom participating in elections to the European Parliament on May 23. “This is a decisive moment in the story of these islands,” she said. “And it requires national unity to deliver the national interest too.”

Mr. Corbyn welcomed the olive branch and said he would be “very happy” to meet the Prime Minister. “So far, the Prime Minister hasn’t shown much sign of compromise, but I’m pleased that today she’s indicated she’ll accept the view of Parliament and is prepared to reach out and have that discussion,” he said in a statement.

Ms. May’s new approach carries plenty of risk. There’s no guarantee the gambit will work and the EU has been leery about extending the deadline. Her cabinet and Conservative party caucus are also deeply divided over the plan and Mr. Corbyn could make demands that Ms. May will find hard to accept, such as holding a referendum on any agreement they reach.

The Prime Minister has also infuriated a key group of Tory backbenchers, known as the European Research Group, who have fiercely opposed her Brexit deal and urged her to accept Britain leaving without a deal on April 12. The Tory rebels have led the charge in Parliament against her Brexit deal, which they believe would keep the country too closely bound to the EU. On Tuesday many reacted angrily at Ms. May’s offer to work with Mr. Corbyn. “This approach to government is an unsuccessful one and it also lacks democratic legitimacy,” Tory MP Jacob Rees-Mogg said Tuesday. “People did not vote for a Corbyn-May coalition government – they voted for a Conservative government.” Added Tory MP Iain Duncan Smith: "This is an utter disaster. We are just about to legitimize Corbyn.”

Ms. May is calculating that she can offset the loss of the Tory rebels by bringing Labour MPs onside. She has insisted that any deal with Mr. Corbyn include a key part of her Brexit deal, the 600-page legally binding withdrawal agreement that outlines the terms of Britain’s departure. Tory rebels don’t like the withdrawal agreement because it includes a backstop that ensures there will be no hard Irish border after Brexit by keeping Northern Ireland tied to EU regulations. The rebels and Northern Ireland’s Democratic Unionists, whose 10 MPs prop up Ms. May’s minority government, argue the backstop ties the country to the EU indefinitely and they want it scrapped.

However, Labour has largely welcomed the withdrawal agreement and is more concerned about the other part of Ms. May’s Brexit deal – the 27-page non-binding “political declaration” that outlines the framework for negotiations on the future relationship between the U.K. and EU. Mr. Corbyn wants those negotiations to include the U.K. remaining in a customs union with the EU, something Ms. May has previously ruled out. Ms. May has said talks with Mr. Corbyn will focus on the political declaration. If she can win him and Labour over, she would have enough MPs for approval of the overall Brexit deal.

EU leaders will meet on April 10 to consider Ms. May’s plan and they are keeping an open mind. “Even if, after today, we don’t know what the end result will be, let us be patient,” Donald Tusk, head of the EU Council which represents the leaders, said on Twitter.

Ms. May’s comments came as tension over Brexit escalated. On Tuesday, the British Transport Police said they found two devices on railway tracks “which were intended to cause disruption to railway services.” The devices didn’t work but Assistant Chief Constable Sean O’Callaghan said an early assessment “has led us to believe it relates to Britain’s exit from the European Union.” Media reports said the devices had notes that read, “Leave means leave” and “We’ll bring Britain to a standstill.” 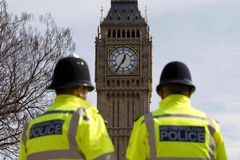 Britain’s Theresa May gambles on talks with opposition to unlock Brexit, enraging her own party
April 2, 2019 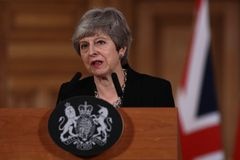 Britain’s reputation as ‘economic powerhouse’ at risk as parliamentarians struggle on Brexit
April 2, 2019 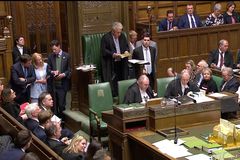