As the COVID-19 outbreak spreads across Britain, the Queen and members of the Royal Family have won plaudits for their morale-boosting efforts and messages of support. The same can’t be said for Harry and Meghan.

The Duke and Duchess of Sussex have been pilloried for appearing self-absorbed during the pandemic. They’ve been mocked for relocating to Los Angeles when the outbreak took hold and roundly criticized for announcing a new “media relations policy” for tabloid journalists just as the number of deaths from the virus topped 18,000 in the United Kingdom.

In the midst of all that, the Duchess has forged ahead with a lawsuit against the owner of Britain’s Daily Mail newspaper and shone more light on the fractious relationship with her father, Thomas Markle. The suit alleges the tabloid violated privacy laws by publishing a handwritten letter she sent Mr. Markle in August 2018, three months after he failed to show up to her wedding. This week, Meghan’s legal team offered new revelations about the disharmony by producing several text messages she and Harry sent Mr. Markle in 2018 begging him to get in touch. Lawyers for the Mail hit back on Friday by asking a judge to strike down parts of the claim, arguing the Duchess was trying to stifle freedom of the press.

“I don’t know what’s going at all with [Harry and Meghan],” said Penny Junor, who has written several books on the Royal Family. “It seems while the country and the world are losing loved ones and desperately trying to keep safe, they’re focusing on tabloid newspapers. I think it’s just bizarre.”

Harry and Meghan have been trying to carve out a new life ever since they stepped away from Royal duties in March. They spent months on Vancouver Island with their son, Archie, and planned to set up a charitable foundation dedicated to several causes including promoting the Commonwealth. But they quickly ran into problems.

The foundation had to be put on hold when the Queen said they could not call it “Sussex Royal,” even though they’d already applied for a trademark on the name. Their move to Los Angeles, the home of Meghan’s mother Doria Ragland, raised questions about their commitment to Britain and the Commonwealth. And when the coronavirus outbreak took hold in the U.K., the couple’s profile faded as other Royals took on significant roles.

The Royal Family – except for Harry and Meghan – has been everywhere during the crisis. The Queen drew 24 million viewers for a televised address this month and her closing comment, “We will meet again," has been splashed on a billboard at Piccadilly Circus. Prince William and his wife, Kate, have been holding regular video chats with health care workers, opening emergency hospitals and joining in weekly clapping for the National Health Service. Prince Charles and his wife, Camilla, and even Prince Philip, who is 98, have made videos honouring those on the front-line of the outbreak in the U.K.

By contrast, Harry and Meghan have been photographed delivering food to needy people in West Hollywood and they’ve gone almost unnoticed in Britain. Their good deeds in the United States have also been overshadowed by the decision to pick a fresh fight with the tabloids.

Last week they announced that they would no longer engage with London-based tabloids the Sun, the Daily Mail, the Mirror and the Express because of what they said had been years of unfair coverage. “There will be no corroboration and zero engagement,” the couple said in a letter to the newspapers, while adding that they remained committed to a free press as “a cornerstone to any democracy.”

The announcement drew a sharp rebuke from several media commentators and the Society of Editors, which represents journalists across Britain. The move was “a clear attempt to undermine certain sections of the U.K. media who often ask uncomfortable questions,” said the society’s executive director Ian Watson. “Although the Duke and Duchess say they support a free press and all it stands for there is no escaping their actions here amount to censorship and they are setting an unfortunate example.”

“I’d say that Meghan and Harry have not done very well during the COVID-19 crisis, what with upstaging the Queen’s brilliant broadcast with their own mistimed announcement,” historian Robert Lacey said.

Not everyone has been critical. Micha Frazer-Carroll, a columnist for the Guardian, said the couple was right to take on the tabloids given their treatment of Meghan. “I believe it is wrong that people’s lives are routinely torn to shreds – often in ways that reproduce racism, sexism and other forms of oppression – in the name of journalism,” she wrote. 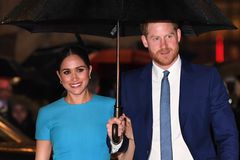 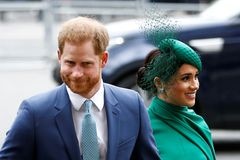 Muted celebrations as the Queen marks her 94th birthday amid coronavirus lockdown in Britain
April 21, 2020 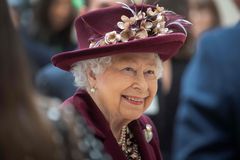